A multi-media narrative titled “Targeting History and Memory” was presented in Belgrade on Tuesday, November 29th, 2016. The Narrative was created by SENSE – Center for Transitional Justice from Pula in Croatia (SENSE), and the Humanitarian Law Center (HLC) organized the Presentation in Belgrade. Approximately 50 representatives of non-governmental organizations, experts for the preservation of cultural legacy, researchers, scientists, journalists and various other experts attended the Presentation.

Mr. Nemanja Stjepanović from the HLC pointed out in his opening remarks that the “Targeting History and Memory” Narrative shows the destruction of the religious and cultural heritage perpetrated during the wars in the former Yugoslavia through the testimonies of eyewitnesses, and through the evidence presented in cases before the International Criminal Tribunal for the Former Yugoslavia (ICTY) which have been prosecuted or documented before this Tribunal. In Mr. Stjepanović’s opinion, the ICTY presents a veritable treasury of evidence and documents testifying about the context of the conflicts, regardless of the outcome of individual cases. However, even though it is available to the public, the ICTY archive is being used almost solely by specialized organizations, including the HLC and SENSE, researching topics to do with dealing with the past.

The Director of SENSE, Mr. Mirko Klarin, at first presented a part of the Narrative showing the destruction of the facilities of all three religions in Jajce (BiH), a town which is a symbol of the former joint state – crimes which have not been prosecuted to date. Then he presented the parts of the Narrative relating to the destruction of the cultural heritage in Dubrovnik, Sarajevo City Hall (a.k.a. Vijećnica), the Old Bridge in Mostar and other events throughout Bosnia and Herzegovina and Kosovo. Mr. Klarin dedicated special attention to examples of the destruction of the cultural heritage which have not been prosecuted to date. He underlined that the ICTY’s primary focus was on the destruction of religious facilities because their destruction proved discriminatory practices in the wars and helped prove crimes against humanity more easily. The limited reach of the ICTY, which did not prosecute all the crimes against the cultural heritage, has not been compensated for by domestic trials, except in some indictments raised in Bosnia and Herzegovina, a case in Serbia relating to the burning of the Bajrakli Mosque in Belgrade in 2004, and in several cases involving individuals who have been prosecuted in Kosovo for the destruction of the facilities of the Serbian Orthodox Church during 2004.

An Architect and a Senior Lecturer at the Faculty of Technical Sciences in Novi Sad, Ms. Mia David stated that she was deeply ashamed, primarily as a citizen, for belonging to the side which committed such serious crimes against the cultural heritage. She also added that this suppression of history in fact represented the destruction of Yugoslavia and the spirit of unity which it symbolized, and that the destruction of cultural monuments and the cultural heritage represents the collateral damage caused by an ideology. She concluded that all parties involved in the conflict did their best to destroy any possibility of life together for the peoples of the former Yugoslavia.

A playwright and the Programme Director of the ZFD Forum organization, Ms. Nataša Govedarica, also pointed out that the objective of the destruction of cultural monuments was to divide communities. A paradigmatic example of this intention was the destruction of the Old Bridge in Mostar, primarily because of its symbolism of connecting peoples and not because of its military relevance. Ms. Govedarica underlined that the physical and symbolic reconstruction of the Bridge did not lead to the reconstruction of inter-ethnic and inter-religious relations in Mostar, as is also the case in the rest of Bosnia and Herzegovina; and she asked the logical questions, What is it that is meant to be reconstructed? and, In what ways have the destruction and reconstruction worked against remembrance? Ms. Govedarica also gave examples of counter-monuments, which do not require physical monuments, but rather emphasize the void, thus allowing the memory of those who are not among us anymore to be always present in the community.

In the opinion of Mr. Branislav Dimitrijević, a professor of Art and Theory of Art at the Faculty of Fine and Applied Arts in Belgrade, the destruction of the cultural heritage committed during the wars in the former Yugoslavia served the objective of destroying the political project which was Yugoslavia. He also mentioned that the destruction of the cultural heritage should not be reduced to the destruction of religious facilities only, because this supports the conviction that the wars in the former Yugoslavia were exclusively ethnic conflicts between tribes that had gone mad, without regard to the broader picture of these conflicts in the international political and ideological trends at the time. He also added that unlike religious facilities, there are a great number of other cultural monuments which were destroyed but have been officially forgotten. In Mr. Dimitrijević’s opinion, the destruction of a heritage which does not belong to any of the existing communities, such as the Yugoslav legacy, represents a special problem because no one will ever be prosecuted for its destruction, and this legacy included some very important artefacts, such as the masterpieces of Yugoslav modern art. He believes that the destruction of the cultural legacy committed during the wars, just like the wars themselves, was directed at the destruction of the heritage and memory of Socialism, which was present in Serbia, the region, and even in wider areas.

During the discussion, Ms. Višnja Kisić, an expert on cultural heritage from the Europa Nostra organization, underlined that it is important that the documents presented in the “Targeting History and Memory” Narrative are accessible to the public, and she called for a discussion about the events that this Narrative records, and for the education of the youth. She also reminded those present that not only in Serbia and the region, but throughout the entire world there is a continuous effort to suppress history and remembrance, and that it is not always related to armed conflicts. As she stated, it happens very often, and it even resembles the model of the destruction of the traces of a civilization in order to create some new order. Ms. Kisić pointed out that Serbia represents a community which marks every year the destruction of the Serbian National Library in Belgrade, destroyed during the bombardment on April 6th, 1941, but has failed to mark the destruction of the Sarajevo City Hall (Vijećnica), which was burned down in August 1992. Ms. Nađa Duhaček, from the Anti-fascist Movement in Serbia, underlined how important it is to research the destruction of secular facilities, like schools, libraries, monuments, community centres and other meeting points relevant to the everyday life of citizens. 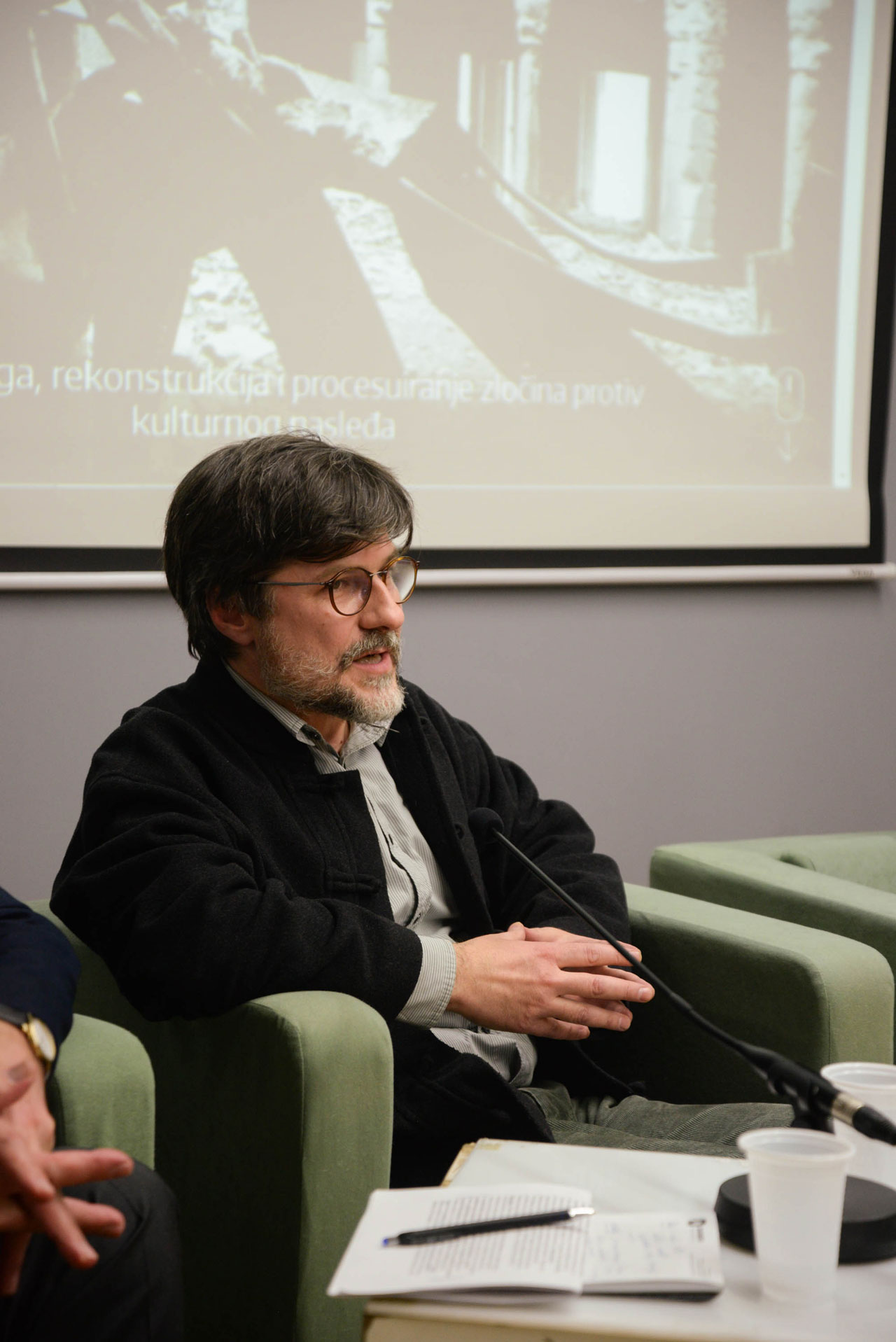 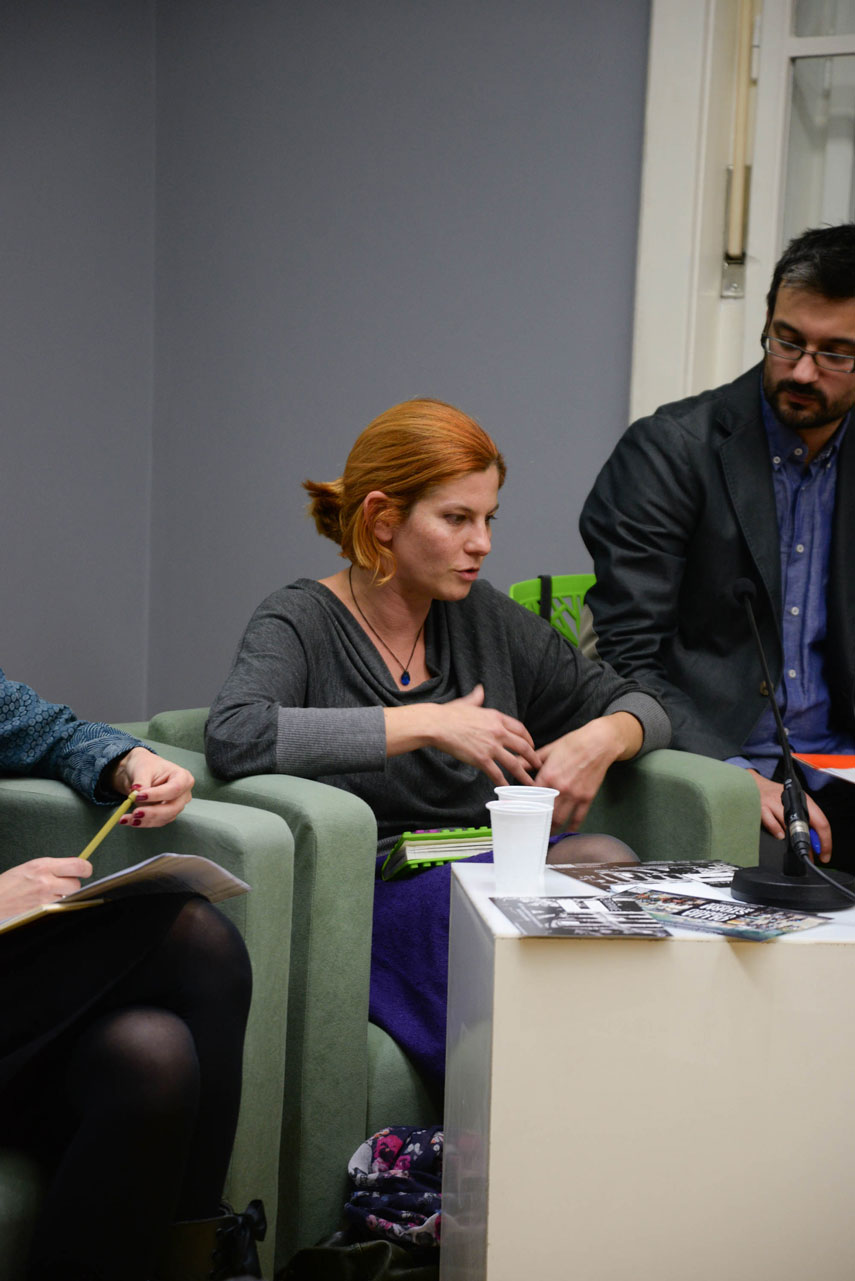 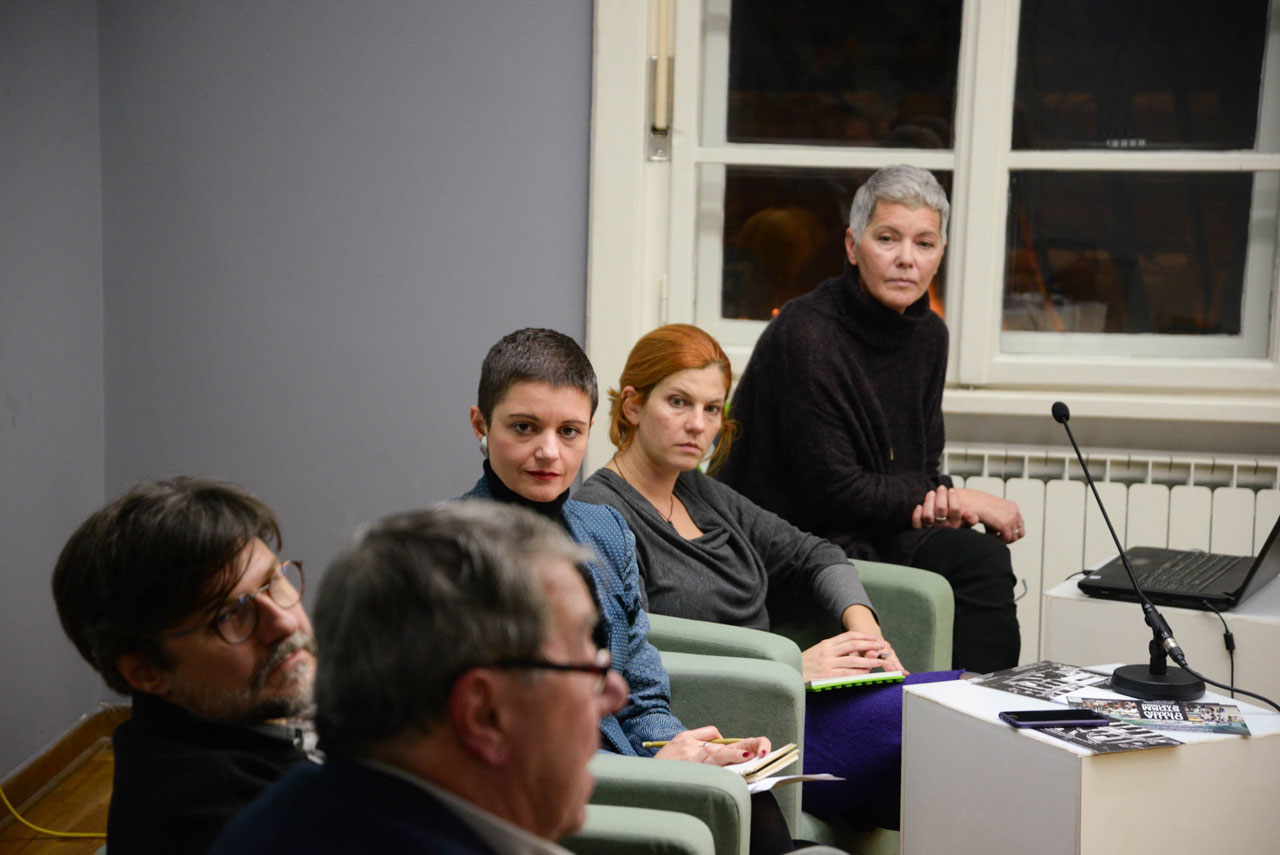 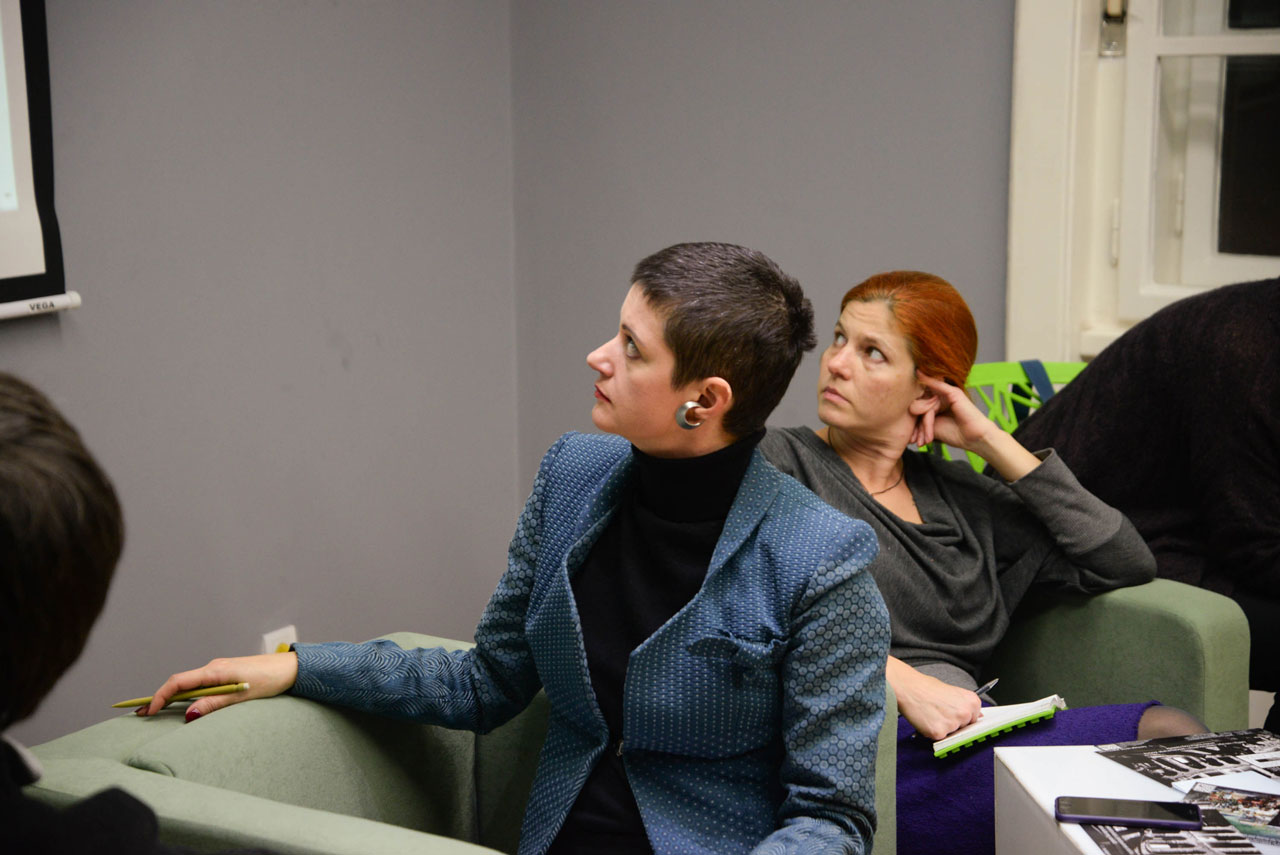 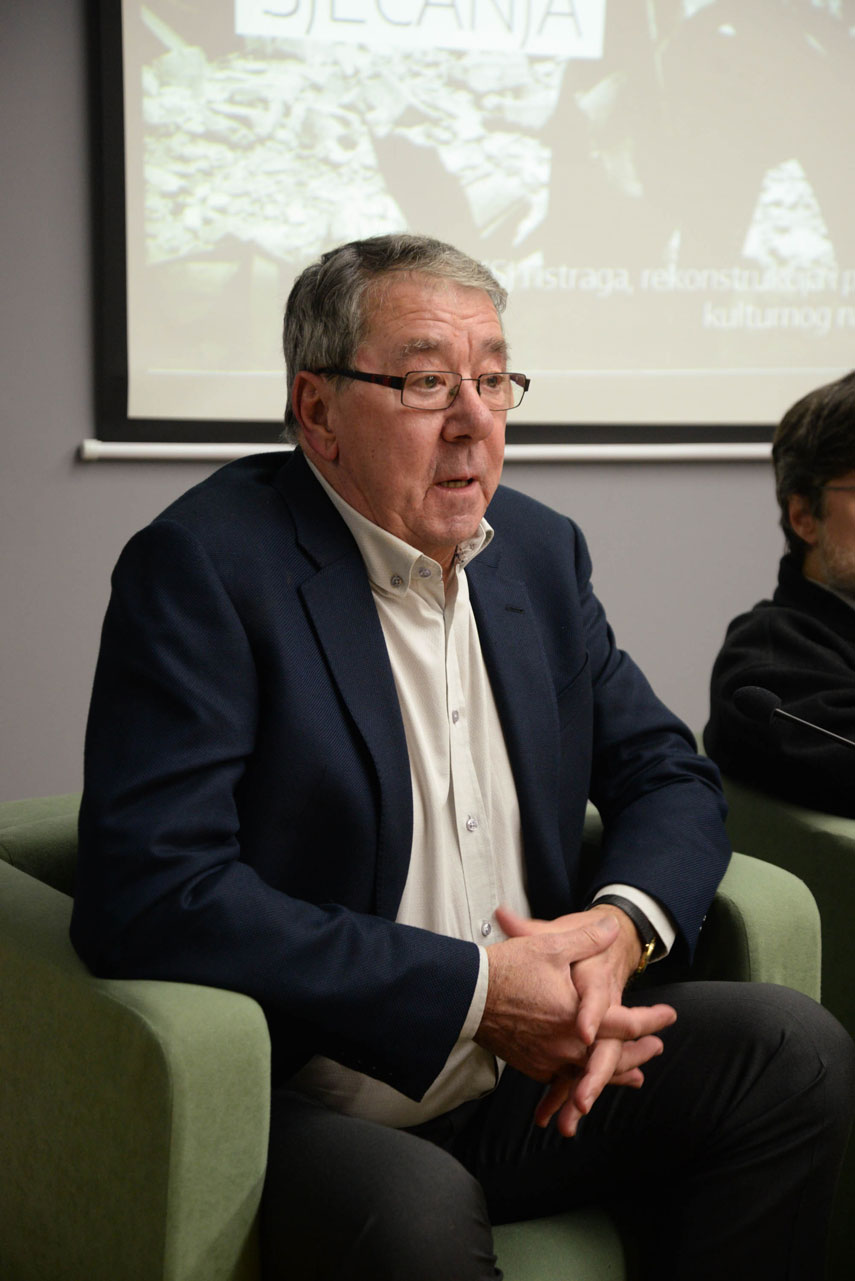 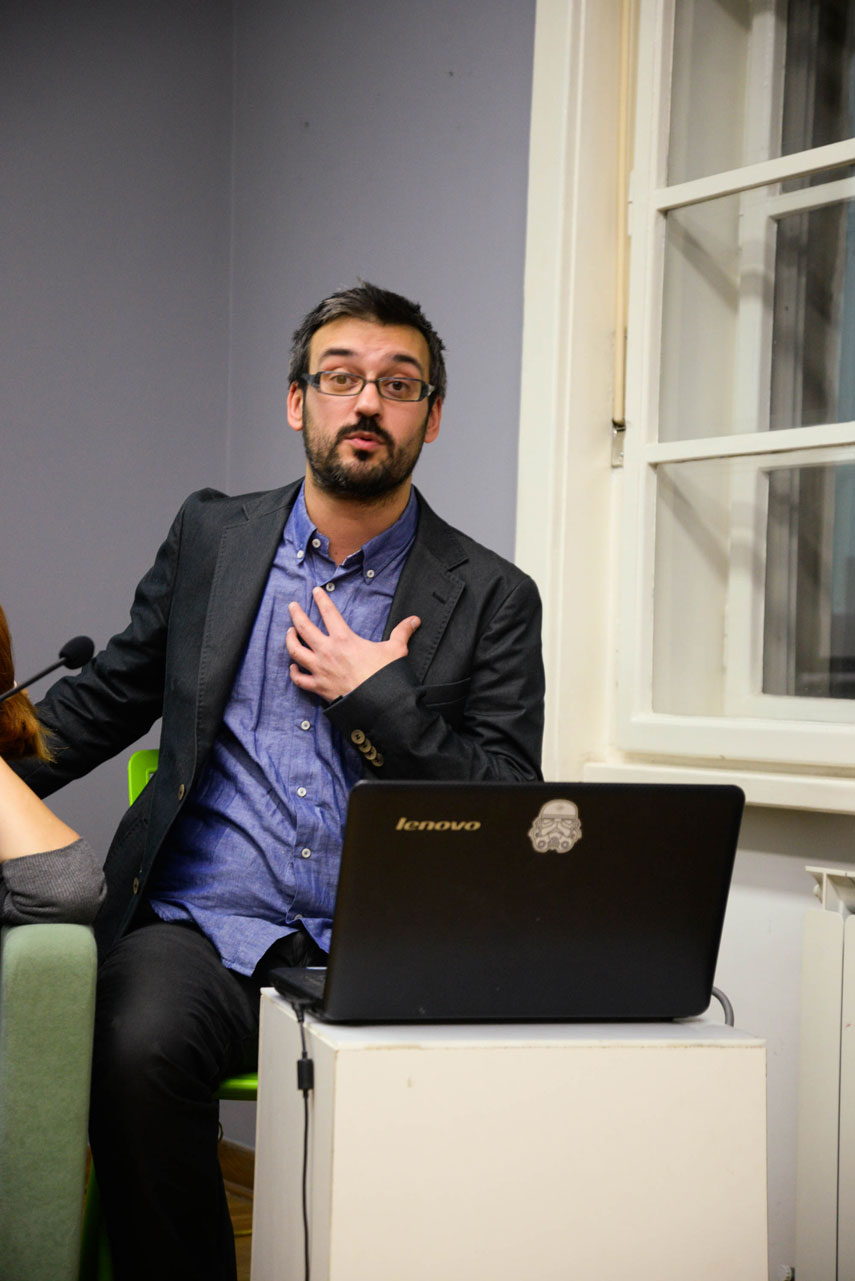 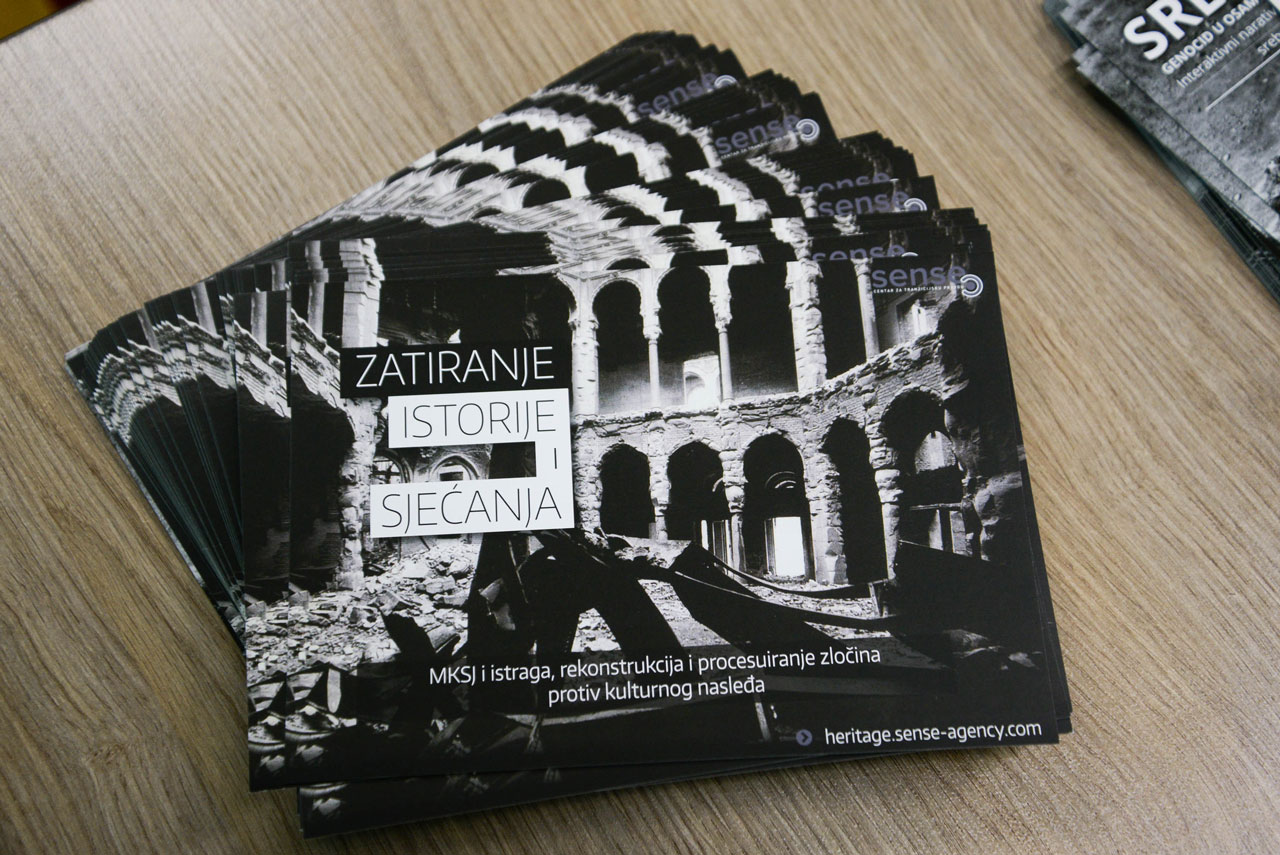 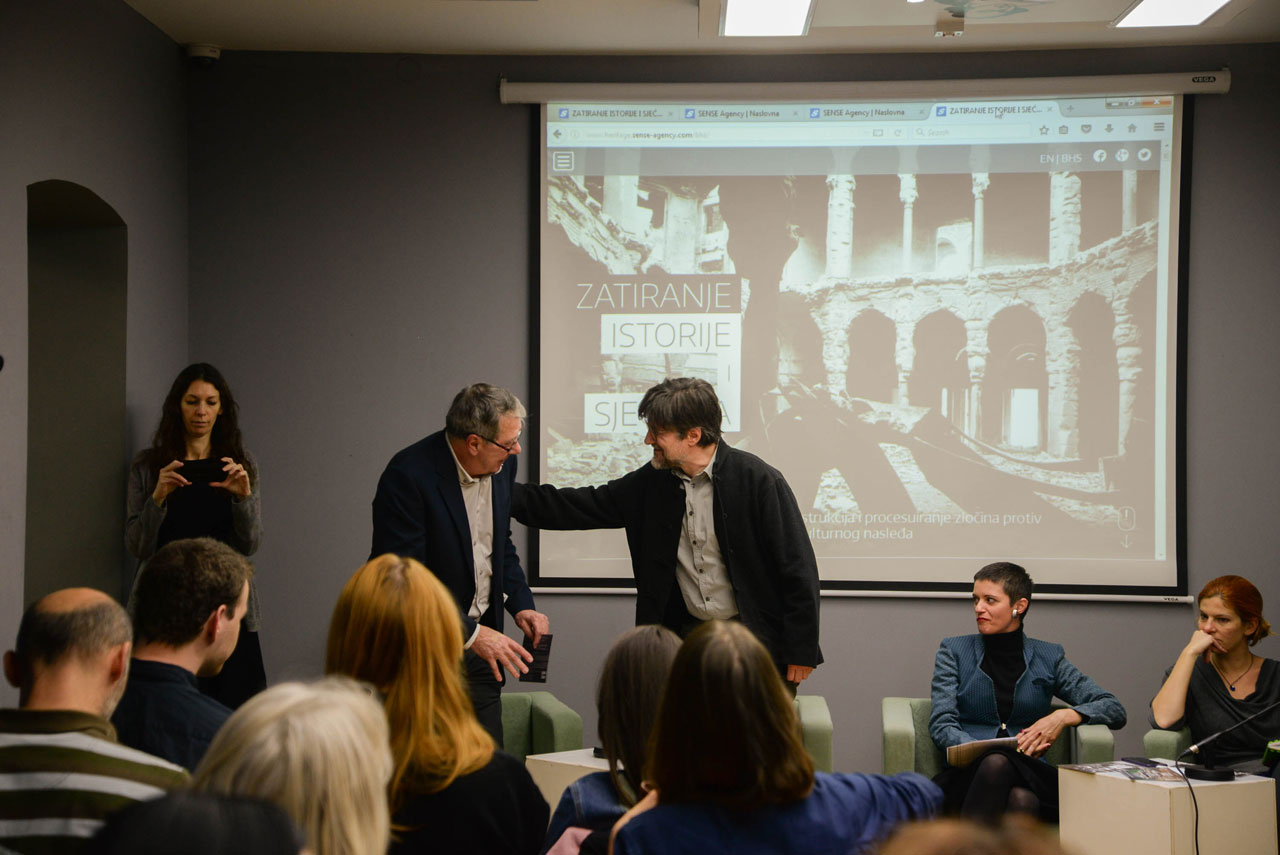 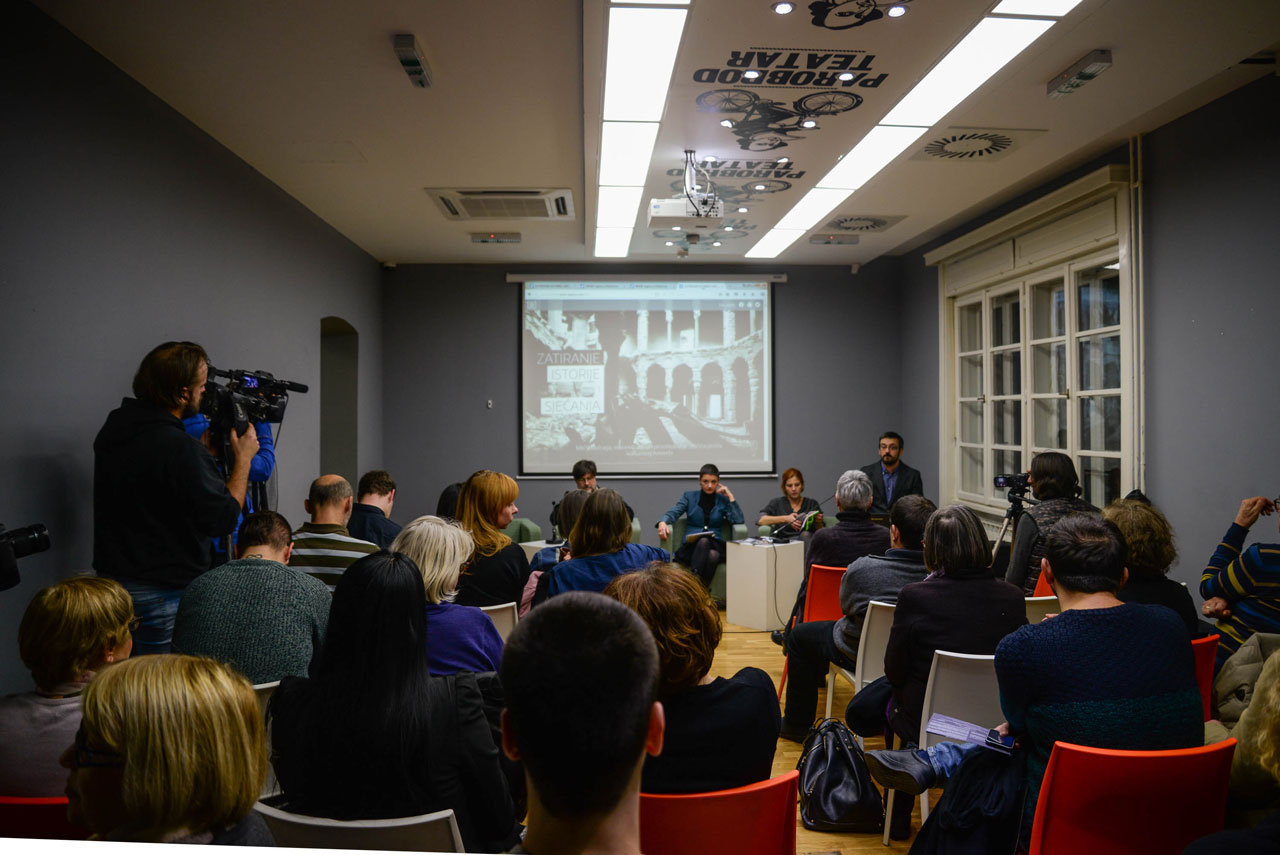 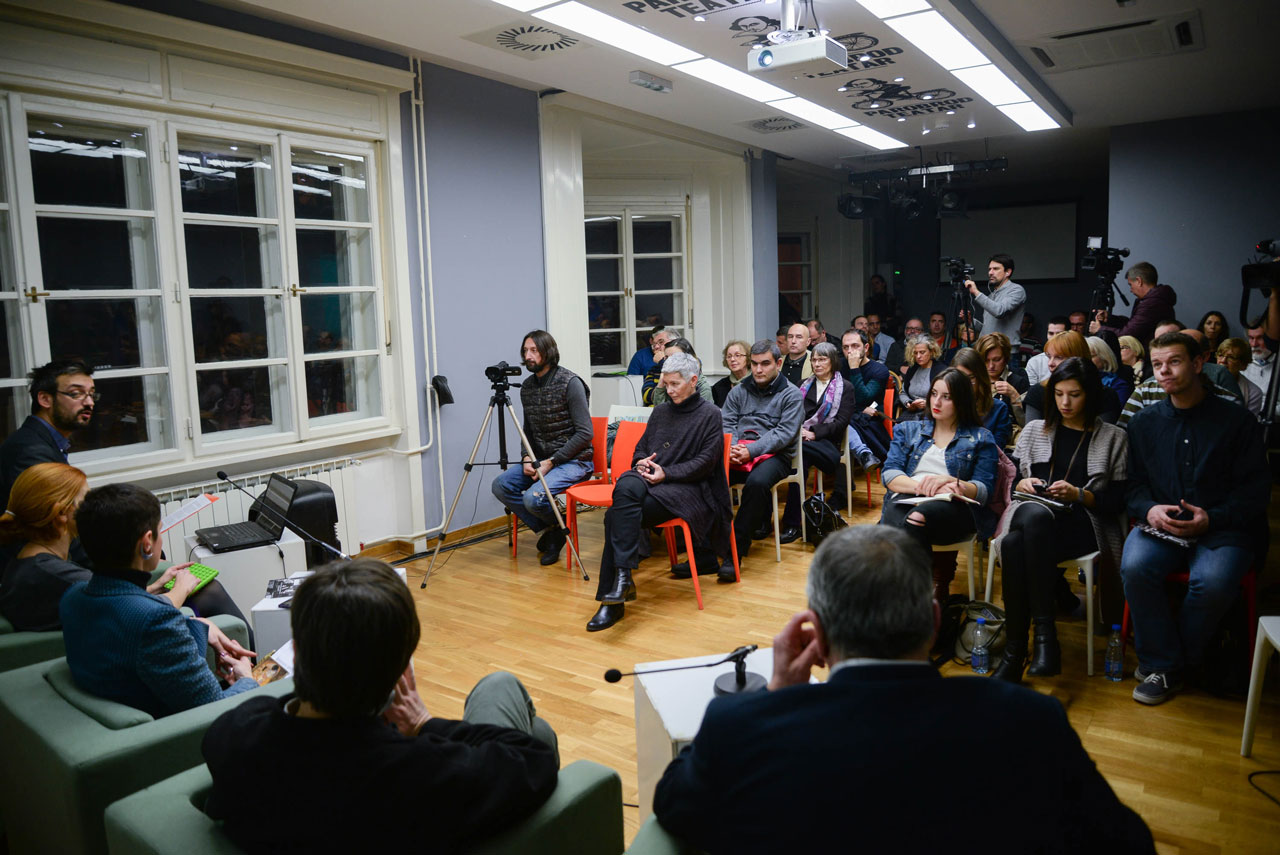 Students from the American University in Paris visited HLC