Remembering the 2001 Armed Conflict in Macedonia: Modes of Commemoration and Memorialization 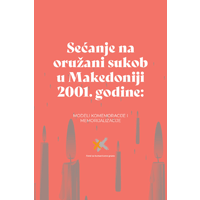 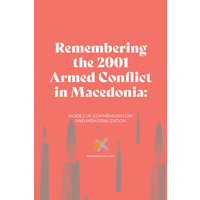 This paper discusses the strategies of commemorating and memorializing the armed conflict in North Macedonia since its formal ending in August 2001. It argues that there are two prevailing modes of remembering the 2001 conflict in post-conflict Macedonia, which match the domains of the two largest ethnic communities in the state, the Macedonian and the Albanian. Observation of annual developments, however, demonstrates that commemorative practices within the two domains are not as uniform as they might seem.

The paper argues that there have been critical changes in the commemorative discourses, actors, and activities over the last two decades, which hint at the shifting power dynamics related to the memory of the conflict and its end. In the first part, the paper analyzes the figure of the “defenders”, the dominant term for commemorating the killed members of the state security forces. The analysis moves on to the figures of the “victors” and “martyrs”, as promoted by the Albanian actors. The second part of the paper focuses on the patterns of interactions between the two communities over the memory of the 2001 conflict. The four patterns that the paper identifies differ in terms of the spatial distribution within the state, the emphases on different episodes of 2001, and the “administration” of memory by the political actors.

The paper is available „Remembering the 2001 Armed Conflict in Macedonia: Modes of Commemoration and Memorialization“ here.

The paper is also available in Albanian, Macedonian and Serbian.