Invitation for the discussion “Memory politics of the 1990s Wars in Serbia: Historical Revisionism and Challenges of Memory Activism” 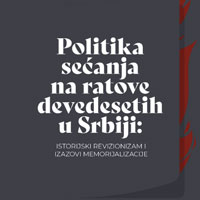 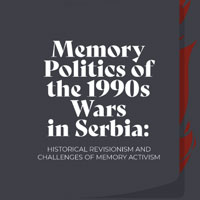 Humanitarian Law Center invites you to attend the discussion “Memory politics of the 1990s Wars in Serbia: Historical Revisionism and Challenges of Memory Activism” and the promotion of the same-titled publication by the HLC. The discussion will take place on Tuesday, 26 October 2021, at 18:00  in the Great Hall of the Media Center in Belgrade (Terazije 3, II floor), with live stream on our Facebook page. Simultaneous translation into English provided for attendances in the Media Center.

Since 2012, when the Serbian Progressive Party came to power, the wars of the 1990s became the focal point of the official memory politics and crucial for the political legitimacy of the SNS government. The populist discourse of the return of the national pride is central to state-sponsored memory work, arguing that the previous governments and international community coerced the Serbian nation to feel ashamed about its heroes and victims of the 1990s wars. The current regime uses the fact that the previous governments did not focus on the 1990s in their memory politics as a demarcation line and source of legitimacy. Because of the SNS and their political allies, the Serbian people are finally allowed and able, as the dominant narrative claims, to remember their heroes and victims with pride. The government builds its political legitimacy on its commitment to the industry of memory, which involves large-scale commemorations, usage of media technologies, cultural production and new ways of disseminating the dominant narratives.

The paper “Memory Politics of the 1990s Wars in Serbia: Historical Revisionism and Challenges of Memory Activism” analyses the memory politics of the 1990s wars and outlines the problem of historical revisionism in contemporary Serbia from the overthrow of Slobodan Milošević until today. The paper illuminates various patterns of denial and relativisation of responsibility and war crimes. The central part of the paper focuses on the period after 2012 and the populist official memory politics.