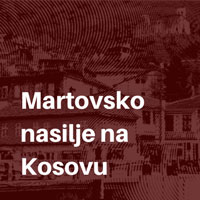 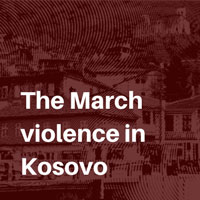 What were the triggers?

The March violence (17 and 18 March 2004) was preceded by three events. The first occurred on the 15th of March in the village of Čaglavica/Çagllavicë, when 18-year-old Serb Jovica Ivić was shot at and wounded in the abdomen and arm. Ivić claimed that the attackers were Albanians.[3] In response to this attack, Serbs from Čaglavica/Çagllavicë blocked the Priština/Prishtinë-Skoplje/Shkup road, a vital route for Albanians, and threw stones at Albanians’ vehicles.[4] This provoked anger of the Albanian community and strong condemnation by its political leaders who accused Serbs of endangering freedom of movement, and UNMIK of being passive towards the blockade.

At about the same time, in several cities in Kosovo, the associations of KLA veterans organized protests over the arrest of former KLA commanders charged with war crimes. These protests were directed, above all, against UNMIK, whose representatives made the arrests. In speeches during the protest, UNMIK was described as a neo-colonial force that “supporting organized crime and continuing the same politics applied by Serbia“.[5]

The third event took place on the afternoon of March 16, when three Albanian boys drowned in the Ibar/Iber river in the Serb-majority municipality of Zubin Potok. Immediately after the accident, the Kosovo media reported on this tragic event as an ethnically-motivated crime, stating that the boys jumped into the river because they were being chased by Serbs with a dog. The media were appealing to the statements of the fourth, surviving boy and the only eyewitness of the accident, but it turned out that the boy talked about Serbs with a dog cursing at them from a nearby house – which scared him and his friends – and not about Serbs chasing them.[6] Later, after investigating the incident, the international prosecutor concluded that the offered evidence did not support the existence of a reasonable suspicion that a crime had been committed.[7]

Although there was a possibility, on the day of the accident, that it was an ethnically motivated crime, the media couldn’t know that beyond any doubt and they were obliged to report professionally, following the known facts. Instead, Kosovo media – and TV stations in particular – reported sensationally, recklessly, emotionally and biasedly.[8] As the OSCE Representative on Freedom of the Media noted in his report, the media did not intentionally incite the violence that would follow the strangulation of the boy, but “had it not been for the reckless and sensationalist reporting, events could have taken a different turn.“[9]

The March violence in numbers

The March riots began in the morning of 17 March with a gathering of Kosovo Albanians in the southern part of Mitrovica/Mitrovicë and soon spread to many other towns in Kosovo. On March 17 and 18, 2004, 50-60,000 Kosovo Albanians took part in the violence, targeting Serbs, Roma and Ashkali, their property and Orthodox religious buildings. The participants in riots would use rocks and Molotov cocktails, set fire to people’s property and shoot at buildings, expel, intimidate and beat people. During the riots, the protesters would clash with UNMIK police and KFOR soldiers, and in some places with Serbs. The violence involved mostly younger men who spontaneously took to the streets. Human Rights Watch (HRW) estimates that the riots were both spontaneous and organized: although most of the protesters joined the riots spontaneously, there is no doubt that Albanian extremists worked to organize and accelerate the spread of violence.[10]

Among the victims, there were two women: Jana Tučev, who was shot dead with a firearm in her apartment in northern Mitrovica, and Dušanka Petkovic from Uroševac, who was a heart patient and died in KFOR base the day after she was kicked out from her house. Four of the Serbs were killed by Albanians with firearms, two were burned in their homes, the cause of death of one of them is unknown, and one disappeared during the evacuation. Two of the Albanians were killed by KFOR members, three lost their lives in clashes with KFOR and Serbs, one was killed by a UNMIK policewoman when he attacked another person with a knife, one was killed by a sniper by Serbs, and the reason of the death of the other Albanians is unknown.[12]

The April 2004 report by the UN Secretary-General stated that 954 people had been injured in the March violence, including 65 international police officers, 61 KFOR members and 58 members of the Kosovo Police Service (KPS).[13]According to the data collected by the HLC in months after the March violence, about 170 Serbs were seriously injured, 150 of them by beatings at their homes, while 20 were attacked outdoor.[14] About 800 Serbian, 90 Ashkali and two Albanian houses were completely destroyed or severely damaged, and 36 Orthodox religious buildings were demolished and burned.[15]

After the March violence, about 4,000 people, having lost their homes, were displaced – some of them for the second time, since they had already been displaced in 1999.[16] Older people found themselves in a particularly difficult socio-economic situation, as well as the others who lost in these riots all the property they had been acquiring all their lives. Immediately after the violence, many people who lost their homes were accommodated in containers provided by the international community and where the living conditions were very poor.[17] The displaced Serbs were largely dissatisfied with the damage assessments made by Albanian institutions, pointing out that the material damage they suffered was much greater.[18] Also, they complained that the help they used to receive from the Government of Serbia was insufficient or that they were not getting it at all.[19]

In January 2006, 1,231 of approximately 4,000 displaced persons after the March violence still had the status of displaced persons.[20] By June 2007, 897 previously destroyed or damaged residential buildings had been rebuilt, out of the intended 993.[21]

Kosovo’s security institutions – both international (KFOR and UNMIK police) and local (KPS) – have failed to protect people and their property. According to the HRW report, members of the international forces interviewed after the March riots showed a lack of self-criticism and unawareness of their mistakes, shifting the blame to each other, but also justifying themselves by lack of material and human resources, inexperience in suppressing protests, surprise factor, lack of coordination, etc.[22] Members of KFOR were unable to prevent the attacks, but mostly acted as rescue teams, helping Serbs evacuate. They would leave unsecured houses behind, and in the presence of KFOR, Serb and Ashkali houses in several municipalities throughout Kosovo were destroyed and looted.[23] UNMIK police have also shown that they cannot control the situation and have no authority.[24]

The Kosovo Police Service (KPS) acted without command and instruction, so the conduct of KPS members varied from place to place. Some police officers sided with the protesters and participated in the destruction of property or they would arrest Serbs and Ashkali who were trying to defend themselves, ignoring at the same time the Albanian violence. Most KPS members were passive observers and wouldn’t interfere even when Serbs were being beaten by the protesters. The third group includes police officers who acted professionally in an effort to facilitate a safe evacuation, which some Serbs see as indirect participation in the expulsion, while others point out that this saved their lives.[25]

Most Kosovo Albanians who did not take part in the riots passively watched what was happening. However, there were also bright examples where Albanians tried to help Serbs by providing shelter in their homes, calling the police, helping them reach KFOR bases and other safe places, but also standing in front of Serb houses preventing protesters from destroying them.[26] In some cases, however, not even the solidarity of the neighbors was able to stop the wave of violence.

“When a group of Albanians came in front of our house, they started setting it on fire, and I was hiding in a toilet hole. I heard two of my neighbors, Albanians, telling them that I was a good man, that I had done nothing wrong to anyone, but it didn’t help. An Albanian who works in the mosque came and chased the two away. After that, they started setting the fire,” said the Serb M.I. from Kosovo Polje/Fushë Kosovë.[27]

The behavior of Albanian political leaders did not help stop the violence. Even when they called for an end to the violence, those calls seemed insincere and forced.[28]

The events in Kosovo provoked protests in several cities in Serbia, which soon became violent. Protesters in Belgrade set fire to Belgrade’s Bajrakli mosque on the night between March 17 and 18, shouting “Kill Shiptar”, “Kill, slaughter, let Shiptar disappear” and “Let’s go to Kosovo”.[29] Until the protesters broke through the police cordon, the police had an order not to use force.[30] The Bajrakli mosque, thanks to its construction, was not completely burned, but its interior was largely destroyed, including the library and art objects. Protesters in Niš set fire to Islam-aga’s mosque and it was even more severely damaged than Belgrade’s mosque.

In Novi Sad, rioters broke shop windows, destroyed and set fire to bakeries owned by Albanians and other Muslims, and broke windows to the Islamic Center premises. The police were mostly passive, standing aside while the protesters stoned the houses in Roma and Ashkali communities,[31] although Roma and Ashkali were not in any way involved in violence against Kosovo Serbs, but they themselves were also victims of the violence.

According to the UNMIK statistics from 2008, 242 people have been charged for the March violence (206 before local and 36 before international prosecutors), and additionally, 157 people have been charged before courts for misdemeanors.[32] International judges and prosecutors dealt mainly with cases involving serious crimes such as murder, attempted murder, incitement to national hatred and causing general danger, while the most common offenses before domestic courts were: participation in a group that committed a criminal offense and aggravated theft.[33]

The trials of these indictments were accompanied by a number of problems and difficulties, including defaulting witnesses, changing the testimonies of witnesses, procrastination of the police in submitting reports, postponing the main hearing, disregarding ethnic motives, imposing minimum sentences or even sentences below the prescribed minimum, the too frequent imposition of suspended sentences, etc.[34]

Out of a total of 399 indictees, 301 were convicted by April 2008. According to the OSCE, 86 persons were sentenced to prison (including suspended sentences), and the maximum sentence was 16 years in prison.[35] The March violence never happened again in Kosovo, thanks in part to KFOR, UNMIK and the Kosovo police.