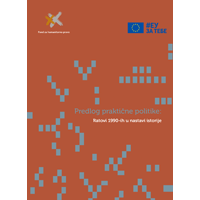 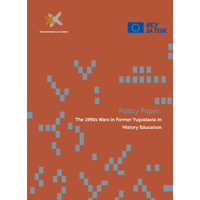 The state authorities in Serbia have formally committed to raising awareness about the 1990s wars in former Yugoslavia, the war crimes committed during them, and the necessity for their prosecution. The National Strategy for the Prosecution of War Crimes, which the Government of the Republic of Serbia adopted in 2016, sets raising awareness and outreach in society as one of its goals. Within the outreach section, the National Strategy addresses formal education, but very briefly, and without binding regulations for educational authorities. The ongoing problem is that, in practice, formal education does not dedicate a lot of attention to the wars that followed the disintegration of Yugoslavia. Although education is mentioned, the National Strategy has not initiated any changes in the way the Yugoslav wars of the 1990s are taught.

This policy paper focuses on the formal education processes, by identifying numerous issues concerning how the wars that followed the dissolution of Yugoslavia are situated in the context of formal education at the primary and secondary school levels in Serbia. The issues pertaining to the problematic or insufficient teaching of the 1990s wars arise in multiple spheres: formulation of the curricula, textbook content, training and education of teachers and teaching practice. The educational authorities do not take international recommendations into account, while most of the work done to improve the situation in these spheres comes from various international and local non-state initiatives. The paper offers recommendations aimed at the state institutions and educational authorities in Serbia.

“Who Can Erase the Traces?” The Role of Archives in the Promotion of Human Rights

Posted On 12th Juli 2012 ~ Comments Off on “Who Can Erase the Traces?” The Role of Archives in the Promotion of Human Rights
U okviru letnjeg kursa Centralnoevropskog Univerziteta  'Politika i prakse u pristupu digitalnim arhivima,' koji je održan od 2. do 6. jula 2012. godine u Budimpešti,

Posted On 23rd August 2017 ~ Comments Off on Report presented: The legal and institutional framework in Serbia regarding the rights and needs of civilian victims of war
U utorak, 22. avgusta 2017. godine, Fond za humanitarno pravo (FHP) predstavio je izveštaj Pravni i institucionalni okvir u Srbiji u pogledu prava i potreba