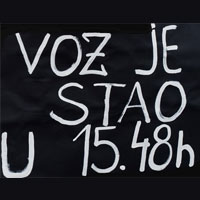 On Wednesday, February 27, 2019, it will be 26 years since the crime in Štrpci, when members of the Republika Srpska Army (VRS), gathered at the railway station in Štrpci (Bosnia and Herzegovina), abducted 20 passengers from a train operating on the Belgrade-Bar route, and then killed them. They were all non-Serb civilians. The Humanitarian Law Center (HLC), Women in Black, the Sandžak Committee for the Protection of Human Rights and Freedoms, and the Youth Initiative for Human Rights in Serbia, would like to remind the public that the families of these victims have been waiting 26 years for justice from the courts in Serbia, and for recognition of their status as families of civilian victims of war.

So far, only Nebojša Ranisavljević and Mićo Jovičić have been finally convicted for this crime. In the court proceedings against Nebojša Ranisavljević conducted before the High Court in Bijelo Polje (Montenegro), he was sentenced to 15 years in prison. Mićo Jovičić, against whom proceedings were conducted before the Court of Bosnia and Herzegovina, admitted to the crime and was sentenced to five years’ imprisonment.

In October 2018, after three and a half years, the Belgrade Court of Appeal finally confirmed the indictment against five members of the Višegrad Brigade of the VRS for the crime committed in Štrpci. Although the start of the main trial was scheduled for January 2019, it was postponed owing to the illness of one of the accused.

The families of the victims, most of whom are Serbian citizens, have been ignored by the state authorities responsible for the care of civilian victims of war (the Ministry of Labour, Employment, Veteran and Social Affairs, hereinafter, Ministry of Labour) – increasingly so over the two decades. Relatives of the victims of this crime, owing to the discriminatory legal framework in Serbia, are deprived of the right to obtain the status of family members of civilian victims of war, simply because their family members were killed outside the territory of Serbia, although they were Serbian citizens. With this status, the relatives of the victims would be provided with symbolic personal benefits in the form of monthly cash allowances and social support.

The victims and their associations, as well as the HLC and other civil society organizations, have for many years been pointing out the inadequacy of the existing legal provisions, and their discriminatory implementation. Despite the serious objections of domestic and international actors, this law has not yet been altered. Instead, in August 2018 the Ministry of Labour brought the Draft Law on War Veteran and Disability Rights, which retains the discriminatory provisions.

The HLC, Women in Black, the Sandžak Committee for the Protection of Human Rights and Freedoms, and the Youth Initiative for Human Rights in Serbia urge the institutions of Serbia to effectively conduct criminal proceedings for this crime, and the Ministry of Labour and other competent institutions to pass a new law based on a Model of the Law on the Rights of Civilian Victims of Human Rights Violations Committed during and in connection with the Armed Conflicts in the period 1991-2001, which contains normative solutions for the realisation of victims’ rights in accordance with international human rights treaties and other international standards in providing reparations to victims.

The HLC, Women in Black, the Sandžak Committee for the Protection of Human Rights and Freedoms, and the Youth Initiative for Human Rights in Serbia invites citizens, representatives of state institutions, media outlets and NGOs to join in an event marking the 26th anniversary of the crime in Štrpci, to take place on Wednesday, February 27, 2019 at 15:48, in front of the entrance to the former Main Railway Station in Belgrade.