After three and a half years, the Belgrade Court of Appeal has confirmed the indictment for the crime committed in Štrpci 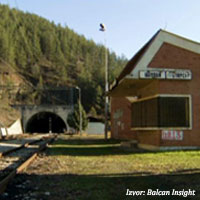 ter three and a half years, the Belgrade Court of Appeal has finally confirmed the indictment of the Office of the War Crimes Prosecutor (OWCP) against five members of the Višegrad Brigade of the Republika Srpska Army (VRS) for the crime committed in Štrpci. In this crime, 20 non-Serb civilians were kidnapped from a train travelling from Belgrade to Bar, and later killed. The Humanitarian Law Center (HLC) urges the institutions of Serbia to approach the processing of this crime seriously and responsibly, and without any delay, and thereby restore the trust of the victims and public in the institutions responsible for the prosecution of war crimes.

Members of the Višegrad Brigade of the VRS, led by Milan Lukić (available in Serbian), later convicted at The Hague, stopped the train at the station of Štrpci and forced 18 passengers of Bosniak nationality to descend from it, along with one Croat and one person of unspecified identity; they then drove them in a military truck to the primary school in Prelovo near Višegrad. Having stripped them of all their valuables and beaten them, they then tied them with a wire and drove them to an abandoned house in the nearby village of Mušići, where they ordered the victims to lie down. They then shot and killed them. So far, only Nebojša Ranisavljević and Mićo Jovičić have been convicted for this crime. In 2003, Ranisavljević was sentenced (available in Serbian) to 15 years in prison. Mićo Jovičić, who was brought before the court of Bosnia and Herzegovina (BiH), admitted that he had participated in this crime, and concluded a plea agreement (available in Serbian) with the Prosecutor’s Office of BiH in 2016, on the basis of which he was sentenced to five years of imprisonment.

The HLC urges the institutions responsible for the prosecution of war crimes in Serbia to undertake this criminal procedure without further delay, in order to regain the trust of the victims’ families in the Serbian justice system, which over the last 25 years has denied them the right to justice for the torture and murder of their loved ones.

State obliged to pay damages to torture victim from 1993