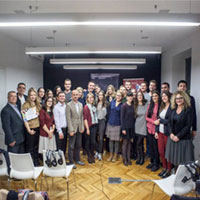 A debate on the role of education in the process of dealing with the legacy of the violent past was held on October 22nd, 2015, in the Library of the Humanitarian Law Center (HLC). The participants in the debate were Sanja Petrović Todosijević, a historian from the Institute for the Recent History of Serbia, Daša Duhaček, a Professor at the Faculty of Political Sciences in Belgrade, the Deputy Executive Director of the HLC, Marijana Toma, and students of the fourth generation of the Regional School for Transitional Justice. The topics of the debate were the position of the educational system towards past human rights violations, the role of youth in reconciliation processes and non-institutional (informal) platforms for the provision of support to efforts to teach history on the basis of facts that have been established.

The participants assessed that there is widespread skepticism concerning formal education throughout the successor countries of the former Yugoslavia, which is a result of a wider lack of trust in the institutions of the system. With regard to the recent experience of armed conflicts on the territory of the former Yugoslavia, formal education contains very problematic contents, but also some very dangerous interpretations of events. These interpretations are the most notable in history textbooks, and a good example of how institutions treat them is given in the analyses of the contents of these textbooks. Despite the fact that these analyses point to the lack of educational contents, the analysts’ recommendations never become part of official policy. Moreover, the new political elites cherish anachronous positions towards the past, and have bowed to fascism and anti-fascism in line with their assessments of what is more politically advantageous at a given moment.

At the same time, a state of denial prevails in the society with regard to the facts about the recent past. Even facts that have already been established and which are well-known are being denied or relativized. This is an indication that very few people are interested in the real truth about that was happening in the past, and that the majority of people are primarily interested in their personal perceptions about given events. Some relevant research speaks of this. Sanja Petrović Todosijević pointed to the results of such research, which showed that young people think they do not know history very well, that they are not interested in it – and particularly history which relates to recent events – and that they believe in mythical stories about certain historical events.

Even though formal education has an irreplaceable role in the provision of knowledge to young generations, the participants stressed that the fact that the formal educational system is not the exclusive educational medium, but that this role is slowly being taken over by the family, youth organizations, and non-governmental organizations, is often neglected. This is where the answer to the question of ‘what to do in order to improve the educational system?’ lies. It is necessary to continue with the implementation of informal educational programmes, such as the Regional School for Transitional Justice, but also to continue to put pressure on the institutions of the system to offer an interpretation of past events to youth – including the roles they played and their responsibility for them, in a proper and factually founded manner. The system must be forced, i.e. motivated, to change; and one of the ways to achieve this is by triggering a broad debate even in situations and periods when social and political circumstances are not favourable.

Daša Duhaček underlined that today’s atmosphere, which shows intolerance and even violence towards certain social groups, such as the Roma and LGBTI communities, is  a consequence of our unresolved positions towards the past. Institutions often do not want to establish and state the facts because this would make them lose their manipulation potential.

The participants concluded that the key prerequisite for dealing with the past is to trigger a dialogue among the new generations, particularly the youth who are engaged in state institutions.

The importance of intragenerational dialogue has also been affirmed by the students of the Regional School of Transitional Justice.

Branislav Vučinič, from Bosnia and Herzegovina, who is employed in the Sarajevo War Crimes Prosecution Office, emphasized that the most impressive experience during the School has been the fact that young people from Croatia, BiH, Montenegro, Serbia, and Kosovo have shown that they can work together, hang out and exchange ideas. He added that the School helped him personally learn more about certain events from recent armed conflicts, and he stated that the School is the right way to develop knowledge about past events.

Sead Bardha believes that the knowledge, experiences, and friendships acquired during the School will help him improve his day-to-day activities within the Advisory Committee for Communities in the Office of the President of Kosovo. He stressed that the main advantage of the School is the diversity of topics and lecturers, who are well prepared.

Ena Kerkez from the Court of Appeals in Novi Sad, believes that the knowledge offered by the School may lead to the change of narratives about the past and thus to a comprehensive reconciliation process. Each of the students will be able to apply the knowledge acquired in the School in their everyday communication within their own communities, which is per se a very cathartic way of action.

Jelena Veletić from the BiH Court was surprised by the interest shown by 25 different young people in the School. As for the School, she stated that it exceeded her expectations with regard to professional training and the knowledge she acquired about the events in the region.

Andrija Jelkić from Croatia emphasized the importance of teaching about the past on the basis of judicial facts, which is the approach that all of the national hagiographies in the region lack. He thinks that such an approach liberates from nationalism and revisionism. He concluded that the lessons on transitional justice have shown him that dealing with the past is the only appropriate cure for the wounds dating from our recent past, and that it represents a recipe for a peaceful future.

The debate closed the fourth Regional School of Transitional Justice and, following this debate, the students were awarded diplomas.