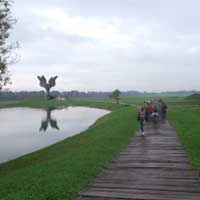 A one-day visit to memorial sites in Croatia was organized as part of the study programme of the Regional School of Transitional Justice (School). Twenty-five students of the fourth generation of the School visited the memorial monument and the Jasenovac Memorial Museum and the Memorial Centre and memorial monument in Ovčara, near Vukovar. On this occasion, they talked about the culture of remembrance in relation to the crimes committed in these locations.

Students had the opportunity to take a look at the permanent exhibition in the Jasenovac Memorial Museum and, during a meeting with the curator, to talk about the sufferings of detainees in Jasenovac and the surrounding areas, and about the process of building a memorial complex, the collection of data on victims, the ways of preserving memories and education about the past.

During the visit to Vukovar, students visited the Memorial Centre and the monument in comemoration of the victims in Ovčara, where they had the opportunity to get acqainted with the crimes committed during and after the siege of Vukovar in the fall of 1991, the destruction of the city, the mass murder of the wounded and civilians at the Ovčara farm, and the transportation of Vukovar detainees to concentration camps in Serbia, as well as the judicial proceedings conducted before the War Crimes Chamber of the District Court in Belgrade.

For many students of the School, this trip was their first visit to Jasenovac and Ovčara. According to Soraja Zagić from Sarajevo, visits to places of victims’ ordeals help students realize that the crimes one has heard of or read about previously actually did happen – to comprehend that they were real and that they happened right on that spot. Especially when it comes to the personal belongings of victims – they testify to the concrete reality of people’s lives and transform them from mere numbers into actual human beings. Una Redžić from Bihać believes that visits to places of hardship and remembrance are important because they preserve the memory of atrocities, and of the victims and perpetrators, for future generations, but also remind us that criminal acts are possible and imaginable.

The aim of students’ visits to memorials and places of hardship for victims is to encourage them to think and to trigger debates within their own communities on ways to remember the victims of the 1990s wars, as well as to combat denial of crimes and victims. In addition, visits to memorials provide an opportunity for students to gain adequate education, by learning the facts about the crimes in order to combat the manipulation of such facts, which can occur through exaggeration of the crimes committed by others and marginalization of one’s own crimes.