Wartime rape victims should not be subject to jokes 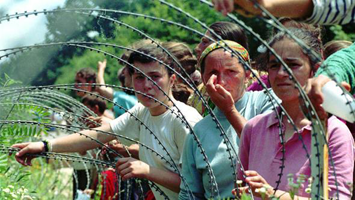 A talk show host on the Prva srpska televizija (First Serbian TV Station), Ivan Ivanović, mocked victims of rapes committed during and in relation to the war in Bosnia and Herzegovina (BiH) in his show broadcast on November 30th, 2014, thus seriously offending thousands of rape victims in BiH. Human rights organizations demand that Prva srpska televizija and Ivan Ivanović make a public apology to victims of rapes committed during the war in BiH, and that they show the movie Grbavica, which discusses the fate of women who were raped in BiH, at the usual time dedicated to this talk show, in order to indicate respect  for these victims.

The host of the “Evening with Ivan Ivanović” talk show made the following statement in the part of the show dedicated to jokes (8:25 min): “The number of Bosnian women who have given birth to children before the age of 15 has increased since 1995. And then people say that ‘the blue helmets’ did not do a thing over there.”

Ivanović’s “joke” reinterprets one of the most horrific episodes of the war in BiH in a morbid and offensive manner, showing the mass rapes of young girls and women as a funny episode in the deployment of international peacekeeping troops in BiH, at the same time seriously neglecting a number of judicial facts about the victims and the extent of wartime rapes of women in BiH.

Human rights organizations point to the fact that Ivanović’s possible reference to allegations about the rape of Bosniak women in one of the Serb concentration camps during the war by members of the UN peacekeeping troops, who have not yet been prosecuted, represents a particular insult for the rape victims, who have not seen justice to date.