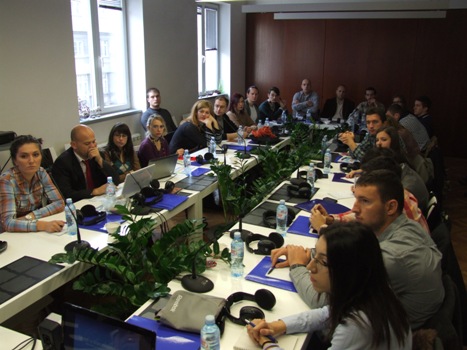 The second Regional Transitional Justice School was opened today, November 19th, 2013, at the premises of the Humanitarian Law Center (HLC). The School, organized again this year by the HLC, the Association Pravnik from Sarajevo, and the Humanitarian Law Center Kosovo represents a ten-day education programme on instruments for dealing with the past. 25 students from Bosnia and Herzegovina, Kosovo and Serbia will attend the School this year.

Sandra Orlović, the HLC Executive Director, stated in her opening speech to the students that judicial facts represent a foundation for the writing of narratives about the events from the nineteen-nineties and emphasized the need for dealing with the past. “We become immune to myths by learning about the past. It makes it easier for us to understand the present, thus symbolically showing respect for victims of crimes”, Ms. Orlović stated.

Dominic-Haydn Braithwaite, the Regional Political Affairs and Conflict Prevention Adviser at the British Embassy in Belgrade, holds that it is necessary to establish a dialogue at the regional level in order to understand what happened during the recent wars in the former Yugoslavia. “The voice of the youth is not heard, politicians are indifferent when it comes to initiatives originating from the younger generations; and for reconciliation it is essential to hear the other side and to show understanding for different opinions”, Mr. Braithwaite stated.

The students will have an opportunity to hear lectures about the facts established in court proceedings before the ICTY and in local war crimes trials, extra-judicial truth-seeking mechanisms investigating past crimes, the right of victims of human rights violations to reparation, the contribution of archives and the media in establishing truth and responsibility, the culture of remembrance and the conflicts involved, and the reconciliation process in post-conflict societies.