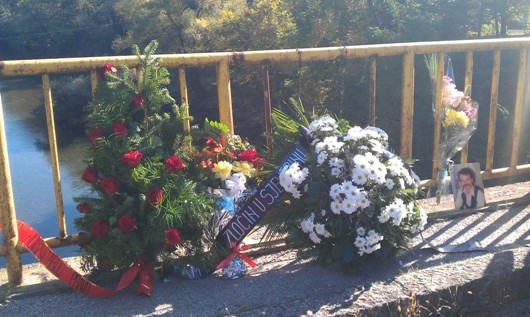 Bridge in Mioče, Bosnia and Herzegovina, place where 16 people from Sjeverin were kidnapped.

The Humanitarian Law Center (HLC) filed another appeal with the Constitutional Court of Serbia in the Sjeverin case. Namely, the HLC filed a constitutional appeal on behalf of 20 family members of war crime victims from Sjeverin against the ruling of the Court of Appeals in Belgrade, in which their claims for compensation of non-material damages against the Republic of Serbia were dismissed.

The HLC initiated a lawsuit for compensation of non-material damages against the Republic of Serbia in June 2007 on behalf of the family members of the missing and the killed, before the First Municipal Court in Belgrade because of the state’s responsibility for the abduction of 16 Bosniaks from Sjeverin in October 1992. The judgment was rendered in February 2009. These claims for damages were dismissed in the judgment, for which reason the HLC filed an appeal.

Due to the failure of the Court of Appeals to act upon the appeal in this case, even after two notices of urgency and an application to the Acting President of the Court, in August 2013 the HLC filed a constitutional appeal because of the violation of the right to a fair trial. The Constitutional Court rendered a ruling on October 15th, 2013 establishing this violation.

HLC-Kosovo: Fair Trial and Judgment of a Serb for Quadruple Murder in Kosovo