Additional evidence for camps in Vojvodina 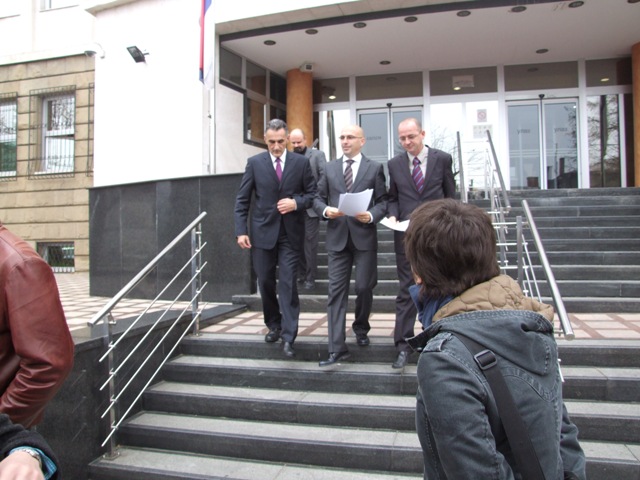 BELGRADE, November 10th, 2011 – Today, Vukovar 1991 Lawyers’ Association submitted an order issued by the former Yugoslav Peoples’ Army Security Department on October 10th, 1991 on the establishment of a camp in Stara Gradiška, to the War Crimes Prosecutor of Serbia, Vladimir Vukčević, as an annex to the criminal complaint filed in May 2008. As the President of the Association, Zoran Šugut, stated for the press, “camps Begejci, Stajićevo, Sremska Mitrovica, Niš, and Belgrade were also established on the basis of this order issued by the Department”, under the command of GeneralAleksandar Vasiljević.

He stated that the Geneva Convention had been violated in these collection camps on the territory of Serbia by torture, rape, and killings committed on daily basis. “I personally   witnessed killings and I was a victim of torture”, Šangut stated and added that 19 persons were killed in these camps and that the number of people who died in the camps and subsequently due to the consequences of abuse and torture suffering in the camps is much greater.

“We expect that Serbia deals with this war crime and that public be informed about what happened there. We mostly expect that the President of Serbia, Boris Tadić, and the politics face the public with the crime and that persons responsible for committing this crime are prosecuted, so that one society and nation would not be described as the one concealing war criminals”, Šangut said. He also added that the majority of commanders and guards in the camps were known by their nicknames because they were already aware of the things they had been doing; he added that the Association expected that the Office of the War Crimes Prosecutor reveals their full names. “We believe that soon enough an investigation into this case shall be initiated, since the Chief Prosecutor of Croatia Mladen Bajić has delivered and indictment charging Aleksandar Vasiljević and Miroslav Živanović, and that it will be joined with our criminal complaint and prosecuted”, he said.

Upon the indictment transferred to the Serbian Office of the Prosecutor in October 2011 by the State Attorney’s Office of the Republic of Croatia (SAORC), Vasiljević and Živanović are charged under command responsibility with crimes against civilians and prisoners of war in camps Begejci, Stajićevo, Sremska Mitrovica, Niš, and Stara Gradiška.

Pero Kovačević, the Vice President of the Vukovar 1991 Lawyers’ Association, underlined that the Association filed a criminal complaint with the Office of the War Crimes Prosecutor already in 2008. He stated that there is a lot of material evidence and that he hopes Serbian Prosecution will initiate a procedure upon the indictment transferred by the SAORC within 90 days. Kovačević wanted to remind the public that the primary accused Aleksandar Vasiljević was a witness in the trial of Slobodan Milošević and that, on this occasion, he said that he saw eight killed prisoners in the Stajićevo camp.

“When Vukčević had a meeting with us a few years ago, together with the Association, he showed us already created files for the war crimes in the camps. How could it be possible that after so many witnesses examined and the evidence, the Office of the Prosecutor has not yet initiated the procedure”, Sandra Orlović, Deputy Executive Director of the Humanitarian Law Center, wondered. When journalists asked her for her explanation of the situation, Ms. Orlović said that only two of 142 persons prosecuted before the War Crimes Chamber are middle ranked officers and that the Office of the Prosecutor apparently has a problem and a reservation when it comes to the criminal prosecution of high ranked commanders. “In the future, when one looks at the judgments rendered by the War Crimes Chamber in Belgrade, one will have an impression that war crimes were committed by some self-organized gangs”, Ms. Orlović said.

Representatives of the Association appealed once more to judicial authorities to prosecute persons responsible for crimes committed in camps in Croatia and Serbia, thus saving the society as a whole from being subject to generalizations. They also reiterated the request to respective authorities asking for permission to place memorials at the locations where detainees died.