Pictures of a War Crime Seminar at the HLC

King’s College from London organized the Pictures of a War Crime – Visual documents and the way they impact war crimes trials and the public seminar which was held at the offices of the Humanitarian Law Center in Belgrade. 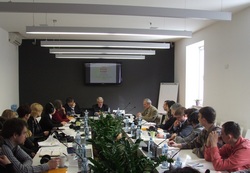 James Gow (King’s College) made a presentation of preliminary findings of a research explaining that the photographs used in the research don’t necessarily show the very act of the commitment of a war crime, but that they will all certainly inspire viewers to think about why it is necessary to deal with war crimes. “Sometimes photographs of famous people attract more attention than the photographs of massacres. An example of that is the case of the famous model Naomi Campbell who testified about the crimes committed in Sierra Leon”, said Gow.

Merdijana-Megi Sadović (Institute for War and Peace Reporting) talked about the role of the media in instigating a conflict. She said that the photographs of crimes are mostly used in the media when there is an intention to remind viewers/readers of an event, to arouse emotions, or present a visual effect to illustrate an event.

“However, when used in hearings, photographs of mutilated bodies and mass graves have a a deeper impact”, said Sadović.

Speaking about visual documents, Nataša Kandić (Humanitarian Law Center) showed the video of the execution of six men in Srebrenica, explaining that the video could not be manipulated with or misinterpreted in any way because it allows viewers to clearly hear and see what happened.

“Although it clearly shows what happened in Srebrenica, this video was neither admitted as evidence in the trial of Slobodan Milošević at the ICTY nor was at admitted at the trial of the members of the “Scorpions” unit in Serbia”, said Kandić.