The Initiative for RECOM is the first regional post-war initiative by which civil society in the region of the former Yugoslavia demands that an inter-governmental and independent body for establishing and publicly disclosing facts about all victims, war crimes, and other serious human rights violations related to war be established. 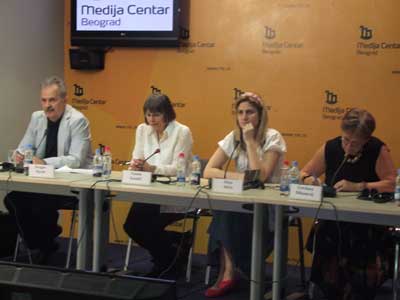 Approximately, 1,900 non-governmental organizations, associations of victims’ families, victims, youth organizations, and renowned individuals from the region have gathered around this initiative. From May 2006 until today, the Coalition for RECOM has organized 129 consultations, five assembly meetings, and eight transitional justice forums, involving 8,700 active advocates of the Regional Commission establishing. The results of the four-year-long consultation process are the loosened tensions between ethnically homogenous associations of victims’ families and the RECOM Statute, which has potential to build up memories of the past and which mobilize for solidarity and compassion with all victims.

The Initiative for establishing RECOM has won significant support from citizens of post-Yugoslav countries. The petition for establishing RECOM was signed by 542,660 citizens. In accordance with the plan, the greatest support was given in Kosovo (100,449), and the smallest in Croatia (19,668). 122,473 support signatures were collected in BiH, and 254,539 in Serbia, which is less than expected. The number of signatures collected in Montenegro (30,057) and Slovenia (5,342) was in accordance with the plan, while the number of support signatures collected in Macedonia (10,022) has exceeded expectations. The greatest surprise was the support of citizens of Banja Luka, where, despite the seven-days-long interruption in signatures collection due to public protests organized because of the arrest of Ratko Mladić, 45,239 citizens supported the establishment of RECOM.

The Initiative for establishing RECOM has won open political support of the Parliament, Prime Minister and the President in Montenegro. The Government of Montenegro has initiated the procedure for triggering discussion on the RECOM Initiative. Presidents of Serbia and Croatia will promote the Initiative for RECOM as part of their national and regional activities, as they stated in meetings with the Coalition for RECOM. Member of the BiH Presidency, Željko Komšić, who received the Initiative for RECOM from the Coalition on June 23, 2011, gave full support for RECOM to be established. Political support for the Initiative for RECOM in Kosovo is noticeably less significant than citizens’ support shown during the signatures collection campaign. Kosovo President Atifete Jahjaga has directed the Coalition for the second time to deliver the RECOM Initiative to relevant bodies in the Kosovo Parliament. The Coalition still has to deliver the Initiative personally to the President of Serbia, Boris Tadić, President of Slovenia, Danilo Türk, and President of Macedonia, Gjorge Ivanov. The priority for the RECOM Coalition since September has been to put pressure on national institutions to create task forces for discussion on the Draft RECOM Statute and the launching of a procedure for the signing of an international agreement or for reaching a political agreement for the establishing of RECOM.

RECOM process has been sponsored by the European Commission, Dutch Ministry of Foreign Affairs, Rockefeller Brothers Fund, National Endowment for Democracy, Balkan Trust for Democracy, Bosch Stiftung, OAK Foundation, Swiss Ministry of Foreign Affairs, Fund for an Open Society in Serbia, and the US Institute for Peace (USIP). Total donation sum, for the period from December 15, 2008 until November 2011, is 2,465,111 euros. Costs of the consultation process in Serbia, BiH, Croatia, Montenegro, and Kosovo at the annual level were approximately 130,000 euros average per country, while in Macedonia and Slovenia they were significantly lower. RECOM Project budget and financial report have been posted on the Coalition for RECOM web page www.zarekom.org, as well as Audit Report concerning the audit of HLC financial and administrative reports in 2010, conducted by a German audit agency in cooperation with authorized audits in Serbia.

The Humanitarian Law Center is the designer of the Initiative for establishing an out-of-court body for establishing facts about war crimes, which focuses on experiences of victims of war crimes and other serious human rights violations. RECOM process and the completion of the Kosovo Memory remain priorities for HLC.  Nataša Kandić will continue coordinating activities of the Coalition for RECOM in Serbia and at the regional level.