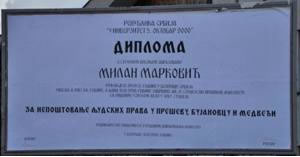 At a press conference held on June 6, 2011 in Belgrade, the Coalition Against Discrimination offered its undivided support to Belgzim Kamberi, President of the Human Rights Committee in Bujanovac with respect to a criminal complaint filed against him by the Office of the Prosecutor in Vranje because he publicly criticized the Minister of Human and Minority Rights in Serbia.

In his address to journalists, Belgzim Kamberi explained that the state organs of the Republic of Serbia tended to criminalize the request of the Human Rights Committee to find a solution for the accreditation of college diplomas from Kosovo, the right of its citizens to access the education system, and obtain diplomas. Nataša Kandić called upon the state organs in Serbia to abandon the practice of intimidation of human rights activists and find a solution for the diplomas issued by universities in Kosovo to be accredited in Serbia, claiming it was a pure political decision. Goran Miletić, Western Balkans Program Director at Civil Rights Defenders, explained that the position of human rights defenders is especially challenging in smaller communities as well as minority communities. Dr. Saša Gajin, Center for Comparative Studies, emphasized that the state institutions often distance themselves from the beneficiaries and that threatened groups and individuals are being further victimized through the abuse of law.

Numerous political and civil organizations from Preševo, Bujanovac, and Medveđa organized a protest on the International Human Rights Day, December 10, 2010 because of the failure of the state organs of the Republic of Serbia to recognize the diplomas issued by universities in Kosovo. On that occasion, the Human Rights Committee in Bujanovac, under the leadership of Belgzim Kamberi, posted a billboard picturing the Minister of Human and Minority Rights, Public Administration, and Self-government of the Republic of Serbia and President of the Coordination Body for Preševo, Medveđa, and Bujanovac Milan Marković receiving a diploma for the disrespect of human right. Shortly after the billboard was posted, the Coordination Body for Preševo, Medveđa, and Bujanovac asked the President of the Human Rights Committee in Bujanovac to remove it. Since the Committee refused to do so, the police removed the billboard on December 12, 2010.On May 30, 2011, Belgzim Kamberi was brought to the police station for an informal interrogation. During the interview that lasted for two hours, he was informed that in compliance with Article 174 of the Criminal Procedure Code of the Republic of Serbia, he had been charged with “damages inflicted because of racial, religious, national, and other background…”