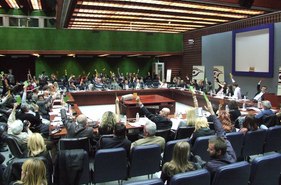 The next step of the Coalition for RECOM is to win a broad support of the public, including a collection of one million signatures from RECOM supporters. This campaign will be conducted by the Youth Initiative for Human Rights throughout the region of the former Yugoslavia.

One million signatures and the Proposed RECOM Statute will be submitted to the parliaments in the region along with a request for all of them to adopt identical laws necessary for the implementation of the Statute.

All until the governments adopt the Proposed RECOM Statute and the suggested laws, the Coalition for RECOM will continue advocating for the Initiative for RECOM before the governments, political parties, and other influential centres of power in the societies in the region.

Report on Material Reparation for 2012 Presented