Telegraph: Kosovan death toll is its argument for independence

A decade after the Kosovan conflict, activists are still trying to establish the number of victims. Analysts believe that this could be an important argument for a pro-independence ruling by a UN court.

Analysis by an AFP reporter in Pristina 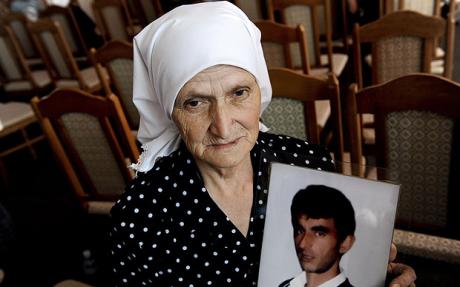 An elderly Kosovan woman from the southern village of Meje holds a picture of her son, who went missing during the 1998-99 conflict Photo: AFP/Getty Images

Travelling throughout Kosovo, talking to victims’ relatives and collecting data on victims, a prominent Belgrade-based non-governmental organisation with offices throughout the region is trying to establish an exact number of those killed and missing in the 1998-99 conflict. “We have registered around 13,000 victims so far,” says Bekim Blakaj, head of the Kosovo branch of the Humanitarian Law Center (HLC), adding that “the data is still not final. We are still discovering new cases”.

According to the HLC, 11,000 Albanians and 2,000 Serbs and other non-Albanians were killed or went missing during the war, which ended when a Nato bombing campaign drove Serbia’s armed forces out of Kosovo in June 1999. The NGO hopes to complete the job next year, and its results could help Kosovo make its case for independence.

Having been run by a United Nations mission for nine years, in February 2008 Kosovo unilaterally proclaimed independence, backed by the United States and most European Union countries. Serbia and its traditional ally Russia rejected Kosovo’s declaration and Belgrade has challenged its legality before the International Court of Justice (ICJ), which will begin hearings on Tuesday.

Political analysts in Pristina are convinced that the death toll might become one of Kosovo’s main arguments when it faces Serbia in the independence row before the ICJ. “It can present one of the fundamental pieces of the Kosovo’s dossier, proving that Serbia declared the war on the Albanians and executed thousands of them in a barbarian way,” said Agim Zogaj, a political science professor at the University of Pristina,

Belul Beqaj, an analyst, said that the figure was evidence that “by systematic killings, which were part of the state policy that aimed at general extermination of Albanians, Serbia simply provided grounds for Kosovo to demand its own state.”

“You cannot exercise sovereignty by mass killings and extermination of people and afterwards claim the right to administer them over,” he told AFP.

The remote southern village of Meje, the scene of an atrocities in which Serbian forces executed 377 ethnic Albanians in a single day in April 1999, met the HLC’s ethnically-mixed team with hospitality. With pictures, death notices, birth and other certificates in hand, aged men in traditional white caps (plis) and women with white mourning kerchiefs (shami) were queued patiently to check with HLC staff details on their murdered loved ones.

Lush Krasniqi, a 45-year old teacher whose two brothers and uncle were among the dead, said that the creation of the death toll database is an “exceptional project 10 years after the war. “To kill innocent civilians was a crime. To forget about them is another,” Krasniqi said.

Natasa Kandic, the HLC head, said the group was making a “list of the victims, with their details, pictures, testimonies and circumstances in which they were killed. “At the end, we will have a dossier about every single victim,” she said.

Kandic, who is the mastermind of the project, said establishing the exact death toll would only be the first step in unveiling the whole truth about the Kosovo war.

“When we make the story on victims no one will ever be able to lock it up or cover it with ashes as it is now.”