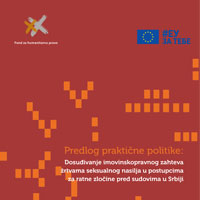 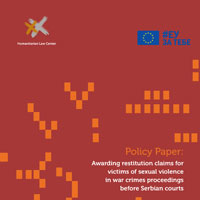 Apart from it being a legal possibility, by awarding claims for damages to victims of war crimes, in particular victims of sexual violence, the court would avoid the re-victimisation of victims who would otherwise have to appear and participate in proceedings before courts yet again, this time as plaintiffs in civil action for the compensation of damage.

The need for such claims to be addressed immediately in the course of criminal proceedings was also recognized by the Supreme Court of Cassation, which in 2019 adopted the “Guidelines for the Improvement of Jurisprudence in Proceedings for the Compensation of Damage to Victims of Serious Criminal Offences in Criminal Proceedings” (SCC Guidelines).

This practical policy proposal constitutes a guide for legal professionals (prosecutors, judges and lawyers) as to how war crimes trial can be rendered more efficient, but also how they can contribute to preventing victims of war crimes, victims of sexual violence in particular, from being subjected to re-victimisation by participating in another protracted and costly judicial proceeding.

As well, awarding damages to the victims of all crimes and not only of war crimes, during the very course of the criminal proceedings would render the judicial system of Serbia more efficient and more just for the victims. More efficient – because the judicial system would be disencumbered of an increasing number of civil action cases, and more just because the victims would be enabled to obtain criminal justice, but also be compensated for damages in single proceedings.

The Humanitarian Law Center (HLC), as the only non-governmental organisation in Serbia which has continuously been monitoring all war crimes trials conducted before the domestic courts, maintains that it is the obligation of the judiciary in Serbia to recognise the need to enable the victims of serious crimes, among whom certainly victims of war crimes, to efficiently exercise their rights without any additional delays, re-traumatisation or additional costs.

HLC hosts students from Serbia, the Netherlands and Kosovo