The HLC presents its Report on the Implementation of the National Strategy for the Prosecution of War Crimes and Policy Paper: Prosecution of Crimes of Sexual Violence during Armed Conflicts before the Courts of the Republic of Serbia 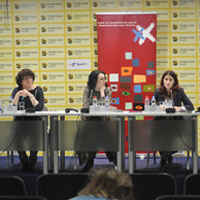 The author of the Report, Višnja Šijačić, said that the findings of the HLC’s research presented in the fifth Report show that no significant progress in war crimes prosecutions could be reported for the 44 months since the adoption of the National Strategy; and this was reflected in the qualitative and quantitative indicators presented in the Report. At least 19 out of the total of 23 indictments that have been filed since the adoption of the National Strategy are not the result of the Office of the War Crimes Prosecutor’s own work, but have been transferred from B&H, said Šijačić, adding that war crimes trials continue to be lengthy, and that no progress has been made towards strengthening the procedural rights of victims. Also, the missing person numbers have been decreasing at a slower pace than expected.

At the same event, the HLC presented its other document, namely the Policy Paper: Prosecution of Crimes of Sexual Violence during Armed Conflicts before the Courts of the Republic of Serbia (Policy Paper), which looks at the national legal framework governing the prosecution of these crimes, with the view to offering recommendations for improving it. The author of the Policy Paper, Ivana Žanić, recalled that the widespread acts of sexual violence committed in B&H during 1992 and 1993 were among the reasons for establishing the International Criminal Tribunal for the former Yugoslavia (The Hague Tribunal). While a large number of cases involving sexual violence have been prosecuted before The Hague Tribunal, the Office of the War Crimes Prosecutor of the Republic of Serbia has filed only 10 indictments for cases with elements of sexual violence, five of which have resulted in final judgements, with only six victims having received justice. After describing the main problems faced by victims of sexual violence in war crimes cases, Žanić presented the HLC’s recommendations on how to solve or at least mitigate those problems as much as possible.

Lamija Tiro, an associate at TRIAL International in B&H (TRIAL), spoke about the prosecution of wartime sexual violence in B&H, with special emphasis on the award of non-pecuniary damages for victims of sexual violence during criminal proceedings. TRIAL noticed that victims who testify in criminal proceedings often feel they are being objectified i.e. used as a mere means for producing evidence in criminal proceedings. TRIAL endeavoured to put the victims at the centre of the criminal proceedings, by providing them with support in making compensation claims in the course of those proceedings. There are many reasons why TRIAL chose to do this, one being the fact that some injured parties are granted protective measures while testifying before court; but if instructed to pursue compensation through civil proceedings, they have to renounce the protective measures. In such situations, injured parties face a difficult choice between protective measures and pursuing compensation. Other problems concern the application of the statute of limitations in these cases against B&H entities, and dismissals of compensation claims. These problems have made it impossible for many sexual violence survivors to realise their rights, while also forcing them to pay high court expenses, which have further undermined their confidence in the judicial system. Tiro also spoke about difficulties with enforcing compensation awards, because many convicted persons possessed no money or property. In order to prevent such persons from transferring property to someone else during the course of proceedings, it is necessary that prosecutors request the court to prohibit suspects from selling or otherwise transferring their funds and property until the completion of court proceedings. According to Lamia Tiro, there have been several cases in B&H in which prosecutors sought measures to secure the suspect’s property. In only one of these cases have the actions taken by the prosecutor subsequently resulted in the offender agreeing to pay damages. This practice, however, has not yet become a norm in B&H, said Tiro.

Posted On 4th Juli 2015 ~ Comments Off on One of the Key Issues Regarding the Protection of Fundamental Rights is the Issue of the Rights of Victims of War Crimes
Dana 3. jula 2015. godine u biblioteci Fonda za humanitarno pravo (FHP) održana je druga po redu brifing diskusija o uspostavljanju tranzicione pravde u procesu