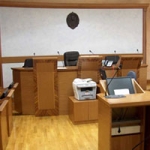 On September 23, 2019, the Higher Court in Belgrade sentenced defendant Dalibor Maksimović to 15 years in prison for killing four persons and raping a Bosniak woman in the Bratunac area in May 1992. The Humanitarian Law Center (HLC) considers that the court erred in not awarding a property claim (compensation) to the rape victim during the trial, but instead directed her to exercise her rights in a civil proceeding.

On April 14, 2016, the Office of the War Crimes Prosecutor accused Dalibor Maksimović of killing four Bosniak civilians – Huso Salkić, Omer Salkić, Nezir Salkić and Mujo Šaćirović, while he was a member of the Republika Srpska Army (VRS). The crime occurred in the villages of Repovac and Glogova (Bratunac Municipality, BiH) on May 9, 1992. Maksimović committed this crime together with other unknown members of the VRS. At the same time, he illegally imprisoned two Bosniak women, now protected witnesses, and repeatedly raped one of them.

The court placed confidence in the testimonies of those who witnessed the murder of the Bosniak civilians, as well as the testimony of the rape victim. These testimonies were sufficient assurance for the court that the accused was the perpetrator of these crimes. In assessing his sentence, the court stated as mitigating circumstances for the accused that he was under 20 years of age, and also took into consideration his family circumstances, while as aggravating circumstances the court pointed to his recklessness while committing the act and the large number of victims.

In war crimes proceedings pending before courts in Serbia, injured parties have never been awarded compensation, which the courts have justified by declaring that such requests would delay the criminal proceedings.

The HLC believes that the court should have adopted a compensation claim by the victim of the rape, who, during the course of the criminal proceedings, benefited from a certain measure of protection of identity. The injured party would not be able to retain this measure of protection in a civil procedure in which she would be entitled to compensation, since the Law on Civil Procedure does not allow a person with a protected identity to appear in the prosecutor’s role. In this particular case, the rape victim was put in the position of having to choose whether to maintain the protective measure and waive her right to compensation, or to reveal her identity and initiate  proceedings for compensation. With such a choice, a rape victim is placed in the position of having to choose between the right to identity protection and the right to compensation. This situation could have been avoided if the criminal court had awarded damages to the victim of the rape.

Contrary to Serbian jurisprudence, the courts in BiH have recognised the problems that victims of sexual violence are facing in exercising their right to compensation, and have modified their jurisprudence by awarding compensations in criminal proceedings. In this regard, the HLC’s position is that such a practice should also be adopted by the Serbian judiciary, in order to obtain compensation for victims of sexual violence immediately in criminal proceedings, thus avoiding the legal obligation to disclose their identities in civil proceedings.

Victims’ Testimonies About Torture in Prisons in Serbia