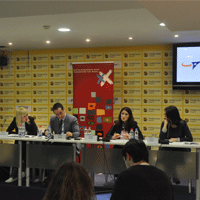 On Thursday, 20 December 2018, the Humanitarian Law Center (HLC) presented its “Third Report on the Implementation of the National Strategy for the Prosecution of War Crimes”. Opening the discussion on the report, Ivana Žanić from the HLC pointed out that the main obstacle to gathering information for the preparation of this report has been the fact that the Working Body, which should monitor and report on the implementation of the National Strategy, was established after a year and a half of delay. So far, they have published a total of four reports, which together cover the period up until September 2018. Apart from the fact that the reports of the Working Body were late, they have often also been confusing and difficult to understand, and some their estimates of the implementation of the activities both arbitrary and illogical.

The author of the Third Report, Višnja Šijačić, pointed out that the HLC’s findings show that 33 months since the adoption of the National Strategy, there has been no progress in the field of war crimes prosecution. The delay in the implementation of the Strategy is a dominant factor, war crimes trials continue to be unreasonably long, and no progress has been made in the field of the procedural rights of victims, while the number of missing persons has not been reduced at the expected rate. She pointed out that in the period covered by this report there was no progress in terms of improving society’s attitudes towards war crimes or war crimes trials. On the contrary, the past few months have seen an expansion of the promotion of convicted war criminals in the public, and the denial of genocide in Srebrenica.

On this occasion, the HLC also presented a document entitled “Regional Judicial Cooperation in the Prosecution of War Crimes: Analysis and Recommendations for Improvement”, that analyses the existing regulatory framework for regional cooperation and the available cooperation mechanisms, with the aim of offering recommendations for its improvement. Announcing the presentation of the analysis, Ivana Žanić stated that regional cooperation has been at its lowest level in the last few years. One of the obstacles to an effective regional cooperation is the universal competence of the Office of the War Crimes Prosecutor in Serbia (OWCP), as defined by the Law on Organization and Competences of Government Authorities in War Crimes Proceedings of the Republic of Serbia. The jurisdiction exercised in this manner means that the OWCP can prosecute any person suspected of war crimes committed in the territory of the former Yugoslavia, regardless of the citizenship of the perpetrator and the victim. As a second problem in the development of regional cooperation, Žanić stated the possibility of trials in absentia. If the practice of trials in absentia becomes present in Serbia, and, as foreseen by some announcements, in Kosovo also, this would not contribute to the development of regional cooperation and normalisation of relations.

Presenting the analysis conducted by the HLC, Šijačić pointed out that the existing normative framework provides a very solid legal basis for cooperation; that is, it allows the prosecutor’s offices to operate with concrete mechanisms of cooperation. However, regional cooperation has not been developed in its full potential. Although there is no doubt that in past years information and evidence have been exchanged, as well as cases that have been subsequently prosecuted, the vast number of war crimes that have not yet been prosecuted indicates that there is still room for improvement in cooperation.

Erna Mačkić, the BIRN analyst, pointed that although there is a legal basis for co-operation between BiH and Serbia concerning war crimes, these two countries only have technical cooperation at present. According to her, the relations between Serbia and Bosnia and Herzegovina are burdened by the fact that Serbia has provided refuge to Novak Djukić, who has been finally convicted in BiH, but who currently resides in Serbia. Namely, Serbia has not yet recognized the final verdict against Djukić, and has enabled his defence to produce evidence that would challenge the verdict of the Court of BiH. Regarding the cases that Serbia has taken over from BiH, Mačkić stated that those have mainly been smaller cases, i.e. with fewer casualties and fewer indictees, who are also of lower rank; there have been no indictments for genocide. She added that relations between BiH and Serbia have been further burdened by the acquittal of Naser Orić for crimes against Serbs, as well as the Dobrovoljačka Case.

Jelena Djokić Jović, from Documenta – Center for Dealing with the Past, assessed that the cooperation between Croatia and Serbia was the most intensive in the period from 2012 to 2014. On the basis of this cooperation, the cases of Lovas, Sotin, Beli Manastir, etc. were initiated. When it comes to the possibility of handing over prosecutions, Djokić Jović stated that Croatia does not hand over criminal prosecutions for crimes, including war crimes, for which imprisonment for a term of 10 years or more has been imposed. She specifically referred to the practice of trials in absentia in Croatia, assessing it as poor, and also stated that there has been a noticeable tendency in Croatia, in those cases in which Croatian citizens are convicted of war crimes against Serbs, for courts to impose penalties below the legal minimum, and that, mitigating circumstances include that a perpetrator took part in the Homeland War.

Bekim Blakaj, from the Humanitarian Law Center Kosovo, stated that during the period from October 1999 to October 2018, the number of cases processed in Kosovo amounted to 48. He concluded that the number of cases so far processed is small, when compared to the total number of victims of the war in Kosovo. As a reason for such a small number of war crimes cases being processed, he said that it should be kept in mind that the international judges and prosecutors who worked in Kosovo had time-limited mandates, which made it harder to process large and complex cases. When it comes to cooperation between Serbia and EULEX, the cooperation has been technical, he said. Blakaj assessed the lack of cooperation with the competent authorities in Serbia as the biggest obstacle in the processing of war crimes, which opens a space for impunity for war crimes. This year, the possibility of trials in absentia has been raised in Kosovo during the debate on the revision of the Kosovo Criminal Procedure Code. Among the arguments for the introduction of trials in absentia are the fact that Croatia has trials in absentia, and that this institute exists in some EU member states. Blakaj assessed the announcement of trials in absentia as dangerous.

Natasa Kandic Recognised by the President of Croatia