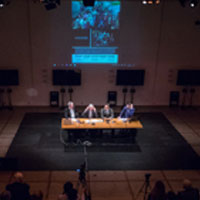 From March 19 to March 28, 2018, the exhibition “ICTY: the Kosovo Case 1998-1999” was presented at the Belgrade Center for Cultural Decontamination. Through video materials and selected documents, the exhibition showed how the crimes committed during the armed conflict in Kosovo were investigated, reconstructed and prosecuted by the International Criminal Tribunal for the former Yugoslavia (ICTY). The authors of the exhibition were SENSE-Center for Transitional Justice from Pula and the Humanitarian Law Center in Kosovo, in cooperation with the Humanitarian Law Center (HLC) and the Center for Dealing with the Past – Documenta. The exhibition relied on an interactive internet narrative, “ICTY: The Kosovo Case 1998-1999 – Investigation, Reconstruction and Prosecution of Kosovo Crimes“; and it is part of the permanent exhibition at the Kosovo Documentation Center in Priština.

The exhibition was opened with a debate regarding public knowledge of court-established facts about the crimes that were committed during the armed conflict in Kosovo. On that occasion, the journalist and director of SENSE-Center for Transitional Justice, Mirko Klarin, the Prosecutor in the Šainović et al. Case, Thomas Hannis, the Executive Director of the HLC Kosovo, Bekim Blakaj, and Nemanja Stjepanović from the HLC constituted the panel.

The panelists recalled that in the Šainović et al. judgment, the ICTY found that the Serbian army and police had conducted a widespread campaign of violence against Kosovo Albanians, in order to expel them from their homes and establish control by the Serb forces over Kosovo. The campaign of violence took place to a pattern that was observed across Kosovo, and had as a result at least 700,000 Albanians being expelled by force from Kosovo in the period from March 24 to June 12, 1999. By implementing this plan, Serbian military and police forces committed mass murders and sexual assaults, and deliberately destroyed the property of Albanians.

The Prosecutor in the Šainović et al. Case, Thomas Hannis, stressed that the court’s findings in this case clearly supported the presumption that Slobodan Milošević was involved in this joint criminal enterprise. As a confirmation that the campaign of violence in Kosovo was a result of the plan of the Serbian state leaders, the best evidence was provided by the two pieces of evidence produced during the trial: notes from the meeting of the Joint Command for Kosovo and Metohija on the plans of the Yugoslav Army and Serbian Ministry of the Interior relating to the implementation of the plan to combat terrorism, which later during the war was transformed into a plan to expel Kosovo Albanians from the then Serbian province. The other piece of evidence was the record of the meeting of the highest state officials in the White Palace (Belgrade) in October 1998, where what had been done in Kosovo until then and what was being planned for the upcoming period were discussed. This particular document, said Prosecutor Hannis, answered the question whether there was an organized plan and coordinated activity between the army, the police and the political leadership of Serbia in the conduct of the campaign of violence against Kosovo Albanians. The key actors in this joint criminal enterprise were Slobodan Milošević, Nebojša Pavković, Nikola Šainović and Sreten Lukić, while Dragoljub Ojdanić and Vladimir Lazarević were indicated as being helpers.

Speaking about the attitude towards the Hague convicts in Serbia and throughout the region, Hannis said it was his conviction that it was not enough that a person who was punished for a joint criminal enterprise with the goal of expelling the population of certain territories – in this case, 700,000 civilians – should be sentenced to 15-20 years of imprisonment and then set free after serving only two thirds of the sentence.

Mirko Klarin added that although the individual responsibility of Slobodan Milošević for the crimes committed in Kosovo was not determined, owing to his death, several other ICTY cases have proven beyond reasonable doubt the crimes committed in Kosovo. Klarin emphasized that in the successor states of the former Yugoslavia, there is a clear trend towards the glorification of “our” criminals, with at the same time a neglect of “our” victims. Also, although the evidence obtained and the facts established by the ICTY today represent a “gold mine” for us, they remain insufficiently known to the general public, owing to the small number of those interested in researching them.

Bekim Blakaj believed that there was a lack of knowledge in Kosovo regarding the processes conducted before the ICTY, and that the knowledge of young people about these processes is mainly formed within the family and by the media. While the trials in the cases of Haradinaj et al. and Limaj et al. are known about to a certain extent, the perception of the facts identified is largely distorted in the public eye. The problem has also been that neither the institutions nor the civil society have relied on the evidence brought before the ICTY in order to inform and educate the public about events during the war. Similarly, public opinion in Kosovo perceives the Special Court for Kosovo as biased and is strongly against its establishment. Blakaj, however, recalled that Kosovo needs this Court, among other reasons because of the ineffective trials before domestic courts, which to date have legally convicted only 30 individuals for war crimes committed during the Kosovo war.

Answering a question from the audience about the prosecution of crimes committed during the wave of violence in March 2004, Blakaj stated that today, since these events have never been fully investigated, neither the motive nor the initiators of the violence are known, but only its consequences, which were 19 victims. He emphasized that especially difficult to understand are the motives for the destruction of the cultural and religious heritage, since such violence did not occur even during the 1998-1999 war. In Kosovo, dozens of cases have been processed in connection with such events, most of which are for purposes of racial and religious vilification, as well as for generating an atmosphere of general danger. Meaanwhile, only a few individuals have been prosecuted for the crime of murder.

Speaking about the role of the Kosovo Liberation Army (KLA) during the Kosovo war, Nemanja Stjepanović pointed out that the ICTY found indisputably that the KLA had committed crimes in the Lapušnik and Jablanica camps, as well as on Mount Berisha, that it was responsible for the killing of a number of people whose bodies were found in Lake Radonjić, and a number of kidnappings and murders of civilians in the Dukagjin area. However, the court epilogue for these crimes was partially missing, primarily because of the lack of evidence, owing to problems with the intimidation of witnesses, who altered their testimony during the proceedings, as well as to the poor quality of the evidence provided to the Court by the Serbian institutions.

In the end, Stjepanović reminded those present that in the countries of the region there is a tendency to perceive the achievements of the ICTY as the end of the process of dealing with the past, rather than its beginning. There is also a tendency, when considering the findings of the ICTY, to take into account exclusively the conclusions of the Court, but not the evidence on the basis of which further valid conclusions could be drawn – even if the Court failed to do so.

During the exhibition, public debates were held on March 20 and 21 regarding court-established facts about the crimes committed during the armed conflict in Kosovo. The public debate on the KLA crimes highlighted the facts that the ICTY had found concerning the existence of KLA-controlled detention camps and the illegal killing of civilians in the Haradinaj et al. and Limaj et al.cases, as well as the answer to the question of why, despite all the established facts, the main commanders of the KLA have not been convicted for these crimes. The public debate about the crimes of the Serbian forces in Kosovo has thrown further light on the development of the crisis in Kosovo, and on the facts established by the ICTY regarding the participation of Serbian forces in crimes, including the basis for the conclusion of the Court concerning the existence of a joint criminal enterprise by Slobodan Milošević whose aim was the ethnic cleansing of Kosovo.

On March 26, an interview with Saranda Bogujevci marked the 19th anniversary of the killings of 14 Albanian civilians in Podujevo on March 28, 1999. On that day, Saranda’s mother, Sala, and her brothers Shpend and Shpëtim, were killed, while Saranda, then a 13-year-old girl, survived the massacre. To Saranda’s recollection of this event and her subsequent search for justice more than 100 citizens of Serbia listened in silence.

The exhibition, “ICTY: the Kosovo Case 1998-1999” was closed with the screening of a multi-award winning film, “Depth Two”, which met with enthusiastic applause from a full audience at the Center for Cultural Decontamination. The author of the film is Ognjen Glavonić, and it was produced by Non-Aligned Films and the Humanitarian Law Center. It was premiered at the 66th Berlin Film Festival in February 2016, after which the film participated in a large number of festivals all around the world. The film is part of the initiative to establish a remembrance site for the victims whose mass grave was discovered in Batajnica, which is known as the “Batajnica Memorial Initiative“.

Visit of Norwegian Members of Parliament to HLC