Families of victims: solving fate of missing persons humanitarian rather than political issue 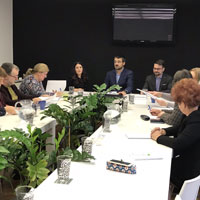 Presenting the findings of the research, the HLC’s legal analyst Višnja Šijačić pointed out that the numerous problems that slow down or prevent progress in the search for missing persons had been identified. Problems leading to a down-turn in progress are common to all the countries in which the research took place, and include tense interstate relations and the reluctance of states to seriously and honestly search for missing persons. Either solving the problem of missing persons is not accompanied by a satisfactory legal framework or the existing laws are not enforced, and the discussion on resolving the issues of missing persons remains in the shadow of discussions regarding the nature of the wars.

Representatives of victims’ associations pointed out that the search for missing persons is a humanitarian issue, which should not fall into the sphere of politics. Victims’ families consider that solutions to the problems of missing persons must not be slowed down on account of political disagreements over the recognition of Kosovo’s statehood, and also that the issue of missing persons should be on the agenda of the Brussels negotiations under the auspices of the European Union. The current dynamics of the exhumations and identification of victims in Croatia are described as stagnant.

For the families of missing persons, it is very important to coordinate the official state records of the missing persons, in order to obtain precise and verifiable data. Concern has been expressed regarding the manipulation and misuse of such data for the purpose of concealing facts about events, to which actors in past events who are still active in different authorities in all of the countries of the region have been resorting. The consequence of such an approach is the denial of the number of victims.

The participants at the round table agreed that the War Crimes Prosecution Strategy of the Republic of Serbia, as one of its priorities, should include and insist on the prosecution of those cases that could lead to the finding of missing persons.

The recommendations of the round table participants will be included in the final version of the regional survey, which will be published at the end of February 2018.

Marking the 21st anniversary of the genocide in Srebrenica