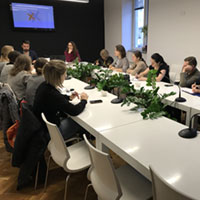 The Humanitarian Law Center (HLC) was visited yesterday by activists of “Justice for Peace in Donbass”, from Ukraine. This Coalition gathers NGOs and initiatives from Ukraine with the aim of documenting human rights violations in those regions that have been affected by the armed conflict since 2014. The aim of the Coalition is to collect all relevant human rights violations that will later support court proceedings against perpetrators of crimes and thus provide one of the basic preconditions for the return of peace and reconciliation in East Ukraine.

Jelena Krstić and Relja Radosavljević from the HLC presented to the Coalition activists the work of the HLC in documenting war crimes and other violations of human rights during the armed conflicts in the former Yugoslavia. The activists from Ukraine were interested to hear about the ways in which the HLC uses the collected documentation to launch criminal and other transitional justice processes. They were particularly interested in Serbia’s attitude towards war crime victims in terms of reparations for injuries suffered, as well as in cooperation between relevant institutions, the attitude of society towards the past and the punishment of war crimes perpetrators.

Posted On 22nd März 2022 ~ Comments Off on Call for Proposals: Media and Revisionism
In Serbia’s public discourse, the dominant interpretations on the Yugoslav wars not only ignore or devalue judicially-established facts about crimes committed during the wars, but