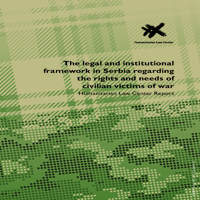 rmed conflicts in the territories of the former Yugoslavia lasted from 1991 to 2001. The wars in Croatia (1991-1995), Bosnia and Herzegovina (1992-1995) and Kosovo (1998-1999) resulted in the mass murders of civilians, ethnic cleansing and persecution of hundreds of thousands of people, but also a large number of grave crimes unseen in Europe since World War II. Serbia had an active and involved role in these conflicts. In the context of the armed conflicts, the authorities in Serbia during this entire period were responsible for serious violations of the fundamental rights of its own citizens from the ranks of national minorities, as well as of some members of the majority Serbian population. In Serbia today there are a significant number of citizens who came to Serbia as refugees owing to the wars in other countries of the former Yugoslavia, and most of them have remained in Serbia permanently. Among them are a fair number who survived crimes, whose physical and psychological consequences they suffer to this day, as well as many of those who lost one or more family members in the war.

Serbia has taken almost no measures to adequately address the rights and needs of past wars’ civilian victims and their families, apart from substantial efforts in regards to housing and resolving the status of refugees and internally displaced persons. The number of potentially eligible victims is estimated to be at least 15 000. The legal and institutional framework is inherited from the time of socialist Yugoslavia and is at the same time frozen in the context of social protection. As a result of the shortcomings in the definition of a civilian victim, the largest number of victims are not recognised under the existing law. The rights reserved for civilian victims take the form of financial support exclusively, at levels insufficient for today’s living conditions. At the same time, there are no other services of social protection of a rehabilitative, psychological, integrative or inclusive nature which have been specifically designed for this category of vulnerable citizens.

The dissatisfaction of individuals and victims’ associations unanimously bears witness to the fact that they, in the second decade after the end of the conflicts, still feel like second-class citizens. This was particularly evident in late 2014, when as part of the proposed changes to the legislative framework, the intention of the authorities to improve the status and rights of the veterans and disabled veterans became apparent, while the civilian victims of wars were completely cast aside. Discrimination and the position of victims of war remains a sideline issue in the process of legal and institutional reform within the framework of the negotiations on accession to the European Union, except in the narrow area of criminal trials for war crimes.

The Republic of Serbia is obligated by ratified international conventions to provide adequate reparations to all individuals whose human rights are guaranteed by these agreements, when those rights have been violated. These reparations should be applied in all their forms, namely, restitution, compensation, rehabilitation measures, providing satisfaction and the establishment of a guarantee of non-repetition. It is up to the state which mechanisms and measures it will establish in order to better achieve these reparative ends: to return dignity to the victim and compensate what the victim suffered to the greatest extent possible and in the broadest sense.

This report by the Humanitarian Law Center (HLC) provides a brief overview of the existing system in Serbia in terms of the rights and needs of civilian victims, and it seeks to ascertain its key shortcomings and identify recommendations for its amendments and improvements.

Report The legal and institutional framework in Serbia regarding the rights and needs of civilian victims of war is available here.