INVITATION: Exhibition and the debate on the destruction of the cultural heritage in the former Yugoslavia 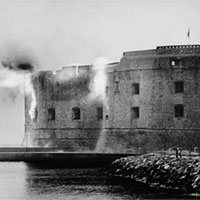 in cooperation with  Documenta – Center for Dealing with the Past, History Museum of BiH and Europa Nostra

cordially invite you to join us at the exhibition

and the opening talk attended by

at the Center for Cultural Decontamination (Birčaninova 21, Belgrade).

The exhibition „Repression of history and memory“ shows the tremendous scale of the destruction of the cultural heritage during the armed conflicts in the former Yugoslavia, which reached the level of becoming the greatest devastation on European soil since World War II. The destruction of historical, religious and cultural buildings and sites was deliberate, part of the execution of the policy of persecuting communities from those areas the conquest of which was the aim. In that way, buildings that once unified the nations became places that separated them, often even after their restoration. The exhibition is designed to contribute to the public debate on the scope and consequences of the destruction of the cultural heritage of the peoples of the former Yugoslavia, to expand horizons beyond the prosecution of those crimes by the Hague Tribunal, and to contribute to a more comprehensive discussion of the importance of cultural, religious and historical treasures in our region.

Prominent war photographers, numerous archival and museum institutions, and such renowned international experts on cultural heritage as Helen Walasek, Andras Riedlmayer and Colin Kaiser, have participated in the setting and realisation of this exhibition. The curator of the exhibition is Branka Benčić from Croatia.

Posted On 3rd September 2015 ~ Comments Off on Audio-Visual Presentation „The ICTY’s investigation, reconstruction and prosecution of crimes committed in Srebrenica in July 1995“ to be displayed in Belgrade from 14-19 September 2015
U organizaciji Fonda za humanitarno pravo i SENSE – Centra za tranzicijsku pravdu, Pula 14. septembra 2015. godine u 18:00h u Centru za kulturnu dekontaminaciju