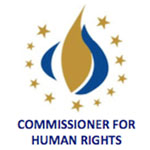 The Council of Europe Commissioner for Human Rights announced on February 22nd, 2017 a report titled “Missing Persons and Victims of Enforced Disappearance in Europe”, which summarizes the findings and recommendations for improving the search for missing persons and the protection of rights of victims of enforced disappearances in the member states of the Council of Europe (CoE). The report ensued after a roundtable with human rights defenders held in mid-2016 in Strasbourg and attended by the representatives of the CoE, the UN Special Rapporteur on Human Rights Defenders, a member of the UN Working Group on Enforced or Involuntary Disappearances and human rights defenders from the member states of the CoE, including the Humanitarian Law Center. The aim of the meeting was to exchange information on the situation in European countries affected by the problem of missing persons, based on the findings and recommendations of the Commissioner in March 2016.

The Report emphasizes that the establishment of the truth about grave human rights violations and enforced disappearances, and respect for and memory of the victims of these crimes are crucial for achieving lasting peace and reconciliation. However, the practice has shown that only a few countries in Europe associate the issue of missing persons with the right of victims to truth, despite the fact that it is recognized as such in international law. This is indicated by the fact that very few commissions for the establishment of truth have been founded in Europe. In this context, particularly important is the Initiative for the Establishment of RECOM, which was initiated by NGOs, but is now in strong need of political support.

Findings relating to national legal and institutional frameworks indicate that several member states of the CoE have still not ratified the International Convention on the Protection of All Persons from Enforced Disappearance. In addition, despite having ratified the Convention, certain countries have not harmonized their legislation and practice with the provisions of the Convention. As an example, the lack of legal solutions that regulate the status of the missing persons and their families was noted, because of which in certain countries families were forced to declare their missing members dead in order to achieve certain social or economic rights.

The national bodies responsible for resolving the issues of missing persons often face political pressures, inadequate capacities and lack of cooperation with civil society, which heavily influence their performance and efficiency.

Findings in connection with the search for missing persons and exhumations indicate slow progress and a dependency on the political agenda of the government. The Report particularly emphasizes that the search for missing persons, exhumation and identification can provide evidence in criminal proceedings for enforced disappearances, but also that there are cases in which there have been no criminal proceedings despite the discovery of a mass grave.

The method that can decisively influence the finding of the locations of mass graves and of missing persons is the opening of state archives; but this issue remains problematic in several countries, including Serbia.

Findings relating to the prosecution of perpetrators point to an unwilling prosecution of those persons involved who are still occupying positions in government institutions, as well as high-ranking officials. Their impunity, besides being inherently unfair, also has the consequence of enabling the retention of their positions in the institutions, including security agencies. This is partly a consequence of the lack of a vetting process.

Findings relating to reparations and support for victims point to an inadequate protection of victims and witnesses, and the rarity of cases offering equitable reparations to victims. In many countries, there is no adequate legal framework that would guarantee reparations to the victims. As an example, the case of Serbia was cited; there, the Law on Civilian Invalids of War does not provide reparation to victims who have suffered because of the actions of the members of the Serbian security forces.

The recommendations of the CoE Commissioner for Human Rights in regard to resolving the fate of missing persons include the following: