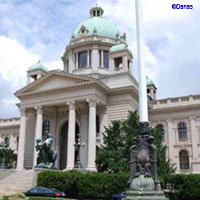 The Administration Committee of the National Assembly of Serbia has proposed Danica Marinković, a former investigative judge of the Priština District Court at the time of the war in Kosovo, as a candidate for the position of  Member of the Board of the Anti-Corruption Agency. The National Assembly will be deciding on the election of the candidate in an urgent procedure. Human rights organizations underline that there is ample evidence available to the public, already presented in books, newspaper articles, and reports (for instance, those issued by the Humanitarian Law Center and Human Rights Watch), as also before the International Criminal Tribunal for the Former Yugoslavia (ICTY), which points to the fact that during the time she served as a judge, she expressed political bias and unprofessional behaviour; for which reason, Danica Marinković is not fit to work in an independent state body.

Danica Marinković appeared before the ICTY as a defence witness in all three cases initiated upon the indictments for crimes committed against Kosovo Albanians in 1999 (Milošević, Milutinović et al and Đorđević). In her statements, she attempted not only to deny the responsibility of the accused, but also to minimize the sufferings of Albanian civilians in Kosovo and justify the failure to act of the investigation judicial bodies in which she served. In addition to  this, one could observe during the ICTY trials that she was dishonorable in the execution of her position of investigative judge, and that her statements were assessed in the judgments as unreliable and unconvincing.

When giving her statements in the “Kosovo Cases” before the ICTY, Judge Marinković defended the inertia of the Judiciary with regard to the crimes against Kosovo Albanians committed during 1998 and 1999. During the examination in an ICTY courtroom, evidence was presented showing that Judge Marinković was a biased investigative judge and that she tried to conceal the crimes committed against Albanians. For instance, in the trial of Slobodan Milošević, she denied torture being committed in Serbian prisons against Albanian detainees accused of “associating in order to conduct enemy activities”, explaining that they sustained their injuries in fights among themselves and accidental “falls in prisons”. It was pointed out in the Milošević Trial that Judge Marinković deliberately issued orders for the medical examination of Albanian detainees who had been beaten up only after one month from the incident, for the purpose of giving time for their injuries to “disappear a little”.

The process of lustration, which would prevent individuals responsible for human rights violations from occupying government positions, is one of the most important prerequisites for establishing the rule of law and the development of a democratic society, but has not been implemented in Serbia since the year 2000. The Accountability for Human Rights Violations Act (also known as the Lustration Law) was in effect for an entire 10 years without being enforced in a single case. Pursuant to Article 9 of this Law, the Law could have (and should have) been enforced in any case of a person who has acted “in official capacity in court proceedings […]if such person was aware or had to be aware that the proceeding was being conducted for the sole purpose of applying political attitudes and criteria that are overtly or covertly represented as legal rules or criteria”.

Human rights organizations call for the responsible state authorities not to appoint to public positions individuals who have contributed to systematic human rights violations in the execution of their official duties. Liberation from the legacy of the former totalitarian regime may be achieved only by  liberation from the people who represented it, since “they cannot be trusted to exercise it in compliance with democratic principles, as they have shown no commitment to or belief in them in the past” (Resolution of the Parliamentary Assembly of the Council of Europe no. 1096).

The undersigned human rights organizations hereby call upon the Members of the National Assembly to dismiss the proposal for the appointment of Danica Marinković as a Member of the Board of the Anti-Corruption Agency, in line with the principles of the Resolution mentioned herein.

Center for the Advancement of Legal Studies

Center for Protection of Human Rights and Tolerance, Polimlje

Network of the Committees for Human Rights in Serbia CHRIS

Sandzak Committee for Protection of Human Rights and Freedoms