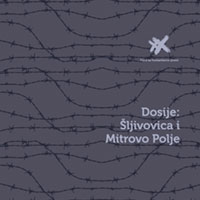 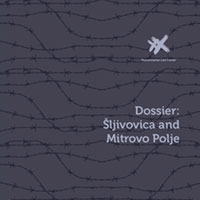 On Thursday, 22 December 2016, the Humanitarian Law Center will present its Dossier “Šljivovica and Mitrovo Polje”. The event will take place at the Belgrade Media Center’s Main Hall (Terazije 3, 2nd Floor) at 11:00 a.m.

After the fall of the protected enclave of Žepa in late July 1995, around 800 Bosniaks sought refuge in the territory of Serbia.  However, immediately after crossing into Serbia they were captured and then taken to two detention camps – Šljivovica near Čajetina and Mitrovo Polje near Aleksandrovac. Until the closure of the camps in April 1996, the detained Bosniaks were subjected to torture, sexual violence, inhumane and degrading treatment, and starvation, and robbed of their belongings.

The “Šljivovica and Mitrovo Polje” Dossier is based on the statements of camp survivors, authentic documents of the Army of Republika Srpska, military and police documents and documents that have been admitted as evidence in several cases conducted at the International Criminal Tribunal for the former Yugoslavia (ICTY), as well as on the testimonies of members of the Serbian Army and Serbian Police, and representatives of the international community before the ICTY, the International Court of Justice and the First Basic Court in Belgrade.

The Dossier presents evidence implicating current members of the Army of Yugoslavia and the Serbian Ministry of the Interior in criminal acts committed against the Bosniaks from Žepa during their captivity in Serbia.

Posted On 27th März 2014 ~ Comments Off on A round table discussion and a presentation of collection of papers written by Regional Transitional Justice School students was held in Pristina
U ponedeljak, 24. marta 2014. godine, u Narodnoj biblioteci Kosova u Prištini su održani okrugli sto na temu Obrazovanje za pomirenje: Uloga obrazovanja u procesu