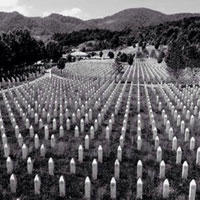 On 15 November 2016, the National Assembly of the Republic of Serbia opened the debate on the Bill on Amendments to the Criminal Code, which prohibits public approval and denial of genocide, crimes against humanity and war crimes, but only if those offenses have been established by the final judgment of a court in Serbia or the International Criminal Court. This would provide legal protection to revisionists of facts which have been established before the International Criminal Tribunal for the former Yugoslavia (ICTY) and the International Court of Justice (ICJ). The Humanitarian Law Center (HLC) calls upon the Members of the National Assembly to amend the proposed bill so that it includes a ban on the denial of facts established by the ICTY and the ICJ, in accordance with the domestic and international legal obligations of the Republic of Serbia.

The bill provides that a new paragraph 5 should be added to Article 387 of the applicable Criminal Code, which will read as follows: “Anyone who publicly approves, denies the existence or significantly reduces the weight of genocide, crimes against humanity and war crimes committed against a group of persons or a member of a group determined on the basis of race, colour, religion, origin, state, national or ethnic affiliation, in a way that can lead to violence or incitement of hatred against such a group of persons or member of that group, if those offenses have been established by a final judgment of a court in Serbia or the International Criminal Court, shall be punished by imprisonment for six months to five years.”

Excluding from the qualifying cause those crimes established by the ICTY, the Bill allows for the denial and public approval of the Srebrenica genocide, the crimes at Ovčara, the mass crimes committed in Prijedor, Markale, Meja and Korenica, Izbica and many other places during the wars in the former Yugoslavia. The HLC would like to point out that Serbia committed itself to respect the decisions of the International Criminal Tribunal under the Law on Cooperation with the ICTY.

The HLC would also like to point out the following: the judgment of the International Court of Justice, which is binding for Serbia under Article 94 of the UN Charter, established that genocide has been committed in Srebrenica, adding that Serbia violated the Convention on the Prevention and Punishment of the Crime of Genocide on two grounds – firstly, because it did not do anything to prevent the Srebrenica massacre in July 1995, “although it must have been clear for Serbia that there was a serious risk of genocide”; and secondly, because it failed to punish those who participated in the crime, which it could have done.

The HLC expresses its concern, and indicates that the Bill is about to be adopted at the time of a continuing campaign which is aimed at denying the court-established facts, with the purpose to revise the history about the 1992-1995 war in BiH. This entire endeavour is being implemented with the use of the state resources of the Republic of Serbia.

The HLC calls on the National Assembly to adopt a legal solution that would penalize the denial of facts established before all relevant international courts, thus setting an example to other institutions and initiating the process of dealing with the facts of the past, as a precondition for reconciliation. The HLC invites the authorities of the Republic of Serbia to accept the facts established by the ICTY and the ICJ regarding the crimes committed in the former Yugoslavia during the 1990s, according to their formal obligation and declarative commitment. The HLC calls upon them to open a public debate on the basis of the facts established so far in court, and fulfill the obligation set out in the National Strategy for War Crimes Processing which refers to “the objective informing of citizens about war crimes trials”, with the aim to “raise the level of general public awareness of events in the former Yugoslavia and the need to expose war crimes, and have them investigated and prosecuted by punishing the perpetrators regardless of their national, ethnic and religious affiliations or their rank.”