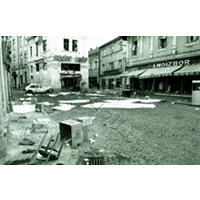 The War Crimes Department of the Higher Court in Belgrade has been conducting proceedings for the recognition and execution of the final judgment passed by the Court of Bosnia and Herzegovina (BiH), by which Novak Đukić was sentenced to 20 years’ imprisonment for a war crime against a civilian population, which he committed by ordering an artillery strike on the Tuzla downtown area known as Kapija on 25 May 1995. At the same time, Đukić’s defence team has been waging a campaign in Serbia to publicly prove Đukić’s supposed innocence. In an effort to deny the facts established in the final judgment against Đukić, his defence team is using the results of an experiment conducted at the training grounds of the Army of Serbia in Nikinci, near Ruma. On the basis of this out-of-court experiment conducted by experts hired by Đukić himself, it was concluded that Đukić and the Army of Republika Srpska (VRS) are not to be held responsible for the massacre of civilians in Tuzla.

The Humanitarian Law Center (HLC) considers that the War Crimes Department of the Higher Court in Belgrade must not take into consideration the results of the abovementioned experiment, and urges it to comply promptly with the Court of BiH’s request, counter the obstructions of Đukić’s defence team and thus demonstrate, through its actions, its true commitment to regional cooperation in prosecuting war crimes. Additionally, the HLC urges the domestic authorities, especially the Army of Serbia, to stop supporting efforts aimed at denying judicially established facts and at negationist revisions of the recent wartime past.

Judgment of the Court of BiH and proceedings for its recognition

On 11 April 2014, Novak Đukić was finally sentenced to 20 years in prison for a war crime against a civilian population. Đukić, the former commander of the Ozren Tactical Group of the Army of Republika Srpska, was found guilty of having ordered his troops to fire artillery projectiles at the Tuzla downtown area known as Kapija on 25 May 1995. The shelling killed 71 people, most of whom were in their twenties, and wounded over 100. In two second-instance proceedings, the Court of BiH upheld the first-instance judgment, modifying the sentence in accordance with a decision of the Constitutional Court of BiH. By a decision of the Constitutional Court of BiH, Novak Đukić was in 2014 released pending the final adjudication of his case.

As Đukić, after his sentence had become final, failed to turn up to begin serving his term in BiH, an international warrant has been issued for his arrest. Đukić has Serbian citizenship and has been in Serbia ever since his release. For that reason, Bosnia and Herzegovina in October 2015 sent a formal letter of request to Serbia requiring Serbia to recognise the final judgment passed by the Court of BiH against Đukić and to assume responsibility for its enforcement, so that Đukić can serve his sentence in Serbia. The War Crimes Department of the Higher Court in Belgrade has repeatedly postponed its sessions in the proceedings for the recognition and enforcement of the Court of BiH’s judgment, owing to Đukić’s supposed bad health.

Đukić’s defence counsel has next moved that the letter of request be turned down, claiming that the trial before the Court of BiH was unfair, which can be used as grounds for refusing to comply with a letter of request under the Law on International Legal Assistance in Criminal Matters (Article 63, para 1, sub-para 4). Đukić’s defence team claims that the trial was unfair because the final verdict was grounded on the findings of the prosecution’s ballistic expert, Berko Zečević, whose findings, according to the defence, “were grounded on false, unproven and unverified information.” At the last hearing in this case, held before the War Crimes Department of the Higher Court in Belgrade on 15 April 2016, Đukić’s defence team asked that the court request Đukić’s entire case file from BiH, arguing that “this is the only way for the court to find out about the actual situation and how General Đukić was tried”. The chamber granted the request and postponed the proceedings pending the receipt of the case file.

Experiments at the Army of Serbia training grounds

Following the final adjudication of the criminal case against Đukić at the Court of BiH, an experiment – Reconstruction of the crime scene in Tuzla’s Kapija – was carried out at the Army of Serbia’s Technical Testing Centre in Nikinci, in the period between 12 June and 4 September 2014, at the request of Đukić’s defence lawyer. The reconstruction included a simulation of the impact of an artillery projectile on a scale model that was supposed to represent the buildings and other structures in Tuzla’s Kapija. On the basis of this experiment it was concluded that the civilians could not have been killed on 25 May 1995 from a blast of a shell fired from the VRS positions, and hence the facts established in the final judgment of the Court of BiH against Novak Đukić were untrue.

The results of this supposedly independent expert analysis have been widely publicised for months in the Serbian press, notably in Večernje novosti. On 4 November 2016, a documentary entitled “Mučni teret podmetnute krivice” (Painful Burden of Imputed Blame), based on the experiments conducted in Nikinci, was shown at Belgrade’s Zvezdara Theatre. Further, in late October 2016, the findings of Đukić’s defence team were presented at a public debate entitled “Science for Truth: Tuzla’s Kapija, 25 May 1995”, which was organised by the Defence and Security Research Centre and the “Despot Stefan Lazarević” Serbian Cultural Club, and held at the Belgrade University Law School.

The HLC warns that the experiments in Nikinci serve a two-fold purpose. By denying the findings of the Court of BiH regarding the responsibility for the attack on Tuzla’s Kapija, their aim is to put pressure on the judiciary so that Đukić can avoid serving his sentence in Serbia; and by not recognising and accepting the judicially established facts, they attempt to revise the recent wartime past.

As regards exerting influence on the judiciary, the HLC points out that, according to the Law on International Legal Assistance in Criminal Matters, the Higher Court in Belgrade may grant or refuse a formal letter of request made by BiH, but certainly may not alter the factual description of the offence in the judgment of the Court of BiH (Article 61, para 4). This means that the War Crimes Department of the Higher Court in Belgrade may not open an evidentiary hearing to hear and assess the results of the experiment conducted in Nikinci. And while an unfair trial is grounds for refusing to recognise a judgment, the Higher Court in Belgrade is not, in the HLC’s view, an appropriate forum for assessing the fairness of the trial in question; because BiH is a State Party to the European Convention on Human Rights, and therefore Đukić’s defence could have applied to the European Court of Human Rights had it considered that Đukić’s right to a fair trial had been violated. Finally, bearing in mind that the Court of BiH grounded its judgment not only on the findings of the criminal investigation, testimonies of insider witnesses from the VRS and several Tuzla residents who survived the attack, but also on the findings of two ballistics experts, who were examined, cross-examined and confronted in court, with Đukić having his own firearms and ballistics expert during the trial, the HLC thinks it is unlikely that Đukić’s defence can offer any convincing arguments to support its allegations of unfairness.

When it comes to the revisionist statements made in public, the HLC considers that the involvement of state authorities in such endeavours runs contrary to the National Strategy for the Prosecution of War Crimes, in which Serbia undertook to “provide its citizens with objective information about war crimes in order to raise public awareness of the events that took place in the former Yugoslavia and of the need to uncover, investigate and prosecute war crimes and punish those responsible, regardless of their nationality, ethnicity, religion or rank.”

That the campaign aimed at denying the truth of the findings of the Court of BiH regarding the responsibility for the attack on Tuzla’s Kapija is part of wider efforts for revising the historical record of the 1992-1995 war in BiH is borne out by the announcement of a new experiment to be carried out in Nikinci, which would deal with the VRS attack on the Markale marketplace in Sarajevo.

Repeating the pattern used in the case of Tuzla’s Kapija, the experiment would only be conducted after the last piece of evidence concerning the Markale massacre has already been presented (in the case against Ratko Mladić), thereby rendering any independent later assessment of the results of the announced experiment in Nikinci impossible. The VRS’s responsibility for the attacks on the Markale marketplace – the first one on 5 February 1994, killing at least 60 people, and the second on 28 August 1995, killing 45 people – has already been proven during a number of trials before the International Criminal Tribunal for the former Yugoslavia (ICTY) – first, during the trial of Stanislav Galić and Dragomir Milošević, former commanders of the Sarajevo-Romanija Corps of the VRS, and later, during the trial of Radovan Karadžić, the former Bosnian Serb leader and commander-in-chief of the Bosnian Serb army. The teams closely connected with the convicts are now trying to challenge these judicially established facts, having failed to do so at the appropriate time – during court proceedings.

The HLC points out that the fact that those who are making these efforts to revise the judicially established truth are using state resources for their purposes, notably those belonging to the Army of Serbia, is a serious cause for concern. Moreover, news media have reported that the future experiments concerning the attack on the Markale marketplace will be “supported by the state”.

The HLC calls on the state authorities of the Republic of Serbia to accept the facts established by the ICTY and courts in the region regarding crimes committed on the territory of the former Yugoslavia during the 1990s and to open a public discussion which will be based on these judicially established facts, instead of supporting the revisionist efforts of close associates of war crimes convicts.