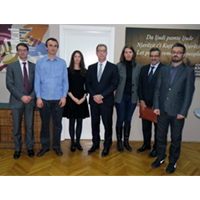 The Chief Prosecutor of the International Criminal Tribunal for the Former Yugoslavia (ICTY), Mr. Serge Brammertz, visited the Humanitarian Law Center (HLC) on October 28th, 2016. On this occasion, he discussed with the representatives of the HLC the achievements in the prosecution of war crimes in Serbia, the cooperation of Serbia with the ICTY, and other endeavours aimed at establishing justice for crimes committed during the armed conflicts in the former Yugoslavia during the 1990s.

Pointing to a number of examples, the HLC Legal Director, Ms. Milica Kostić, showed how Serbia’s political dedication to ending impunity for war crimes is only declaratory. The lack of cooperation with the ICTY, the protracted and politicized procedure for the appointment of the War Crimes Prosecutor, the contrast between the programme offered by the best candidate for the position of Prosecutor and the actual strategic framework for the prosecution of war crimes, are only some of the numerous indicators of the degree of Serbia’s determination to prosecute all individuals responsible for war crimes. Quite apart from all this, the court judgements rendered against human rights defenders for alleged violations of the honour and reputation of persons for whom there are serious indications pointing to their responsibility for war crimes, only show that there is a wider design to prevent any sort of critical thinking about the responsibility of individuals for serious and mass crimes.

An HLC researcher, Mr. Predrag Miletić, presented the long-running work of the HLC on documenting human rights violations committed during the armed conflicts in the former Yugoslavia, and also the Kosovo Memory Book database. Mr. Nemanja Stjepanović and Ms. Jelena Krstić, also representatives of the HLC, introduced the Chief Prosecutor to the HLC’s further plans for the use of the ample documentation stored in the HLC’s archive for the purpose of informing the public and paying respect to all victims.

Chief Prosecutor Brammertz commended the efforts that the HLC has been making in establishing responsibility and justice for the atrocities committed in the past, and also highlighted the importance of the mission implemented by the HLC, and not only in Serbia, but in the entire region.

Chief Prosecutor Brammertz is visiting Serbia as part of the preparations for submitting a new six-months’ report to the United Nations Security Council.