“Depth Two” A Barrier To Contamination Of Memory of Victims 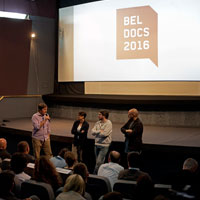 “Depth Two”, a film directed by Ognjen Glavonić, was screened at the Cultural Centre of Belgrade on May 13th, 2016, before a hall full of people. This was the première of the film in Belgrade, following the screenings at the 66th Berlin International Film Festival and Festivals in Thessaloniki and Wiesbaden, as well as in other cities in Serbia and Kosovo.

“Depth Two” is a documentary film about a mass grave discovered in Batajnica in 2001, which concealed the bodies of several hundreds of Kosovo Albanians, civilians who were killed during the war in Kosovo. The film is a combination of live testimonies and photographs, taken at the spots where these crimes were committed 17 years ago. The Author of the film is Ognjen Glavonić, and it was produced by Non-Aligned Films and the Humanitarian Law Center (HLC). The film is a part of the Batajnica Memory Initiative, aimed at creating a memorial site for victims found in Batajnica.

A discussion with the film crew was held following the screening of the film, with a journalist from Zagreb, Saša Kosanović, participating. Ognjen Glavonić, the author of the film, spoke to the audience about the process of designing and creating the film, and about the challenges which accompanied this process. The essence of the experimental form used in the film is to elicit the spectator’s participation by appealing to her or his imagination and helping them to imagine the events which took place, which are presented on the screen and then followed by the testimonies of participants in these events. The silence at the end of this film allows each spectator to receive an imprint of the personal message that this film relays. Mr. Glavonić highlighted that the Film does not offer an answer, but is aimed rather at triggering questions.

The Executive Director of the HLC, Sandra Orlović, who is also a Co-Producer of the Film, emphasized that the Film emerged from an initiative to erect a Memorial for Victims at the site where these mass graves were found. The reason why Batajnica is being singled out from other scenes of crimes lies in the fact that “it is so monstrous that it can hardly be compared to any other event in the former Yugoslavia”, since it is the largest mass grave connected to the war in Kosovo, and the only one which has been found in the vicinity of the capital. It also concealed the mortal remains of 75 children. Films like this one, as well as other initiatives which occasionally appear in the region of the former Yugoslavia, represent at the moment the only oases for the preservation of the memory of victims, whereas any other memory tends to be politicized and contaminated. According to her, only the memory of each victim individually is a genuine memory, whereas anything other than this represents the contamination of our memory. The film “Depth Two” represents a barrier against such contamination, as well as a resource for learning about past events.

The journalist from Zagreb, Saša Kosanović, who is himself an author of a number of films which are aimed at the preservation of the memory of victims’ sufferings (the films “Logori” and “Crno i crnje”), expressed the fear that the countries in the region are nurturing a generation of young people who know nothing about the armed conflicts in the former Yugoslavia, and that it is being left to their personal desire and motivation to engage in work related to topics about the past. He pointed out that the purpose of films such as this one, is to give voice to victims who can no longer speak. The risk, however, which is associated with their messages, is that they will remain locked inside a closed circle of like-minded people. Therefore, it is necessary to find a way to expose the wider public to such contents on a daily basis.

Mr. Kosanović also noted that films like this often trigger the question, “And what about our victims?” One representative of Serb families whose members disappeared or were killed in Kosovo, Simo Spasić, asked this very question; although after he had praised the film and paid respect to the victims the film spoke about.

The moderator of the discussion, Director Nikola Ljuca, assessed that one of the film’s outstanding qualities is to be found in the fact that it manages to bring about personal, individual observations through associations triggered by the presentation of authentic places, and that it leads to a very personal understanding through seemingly objective research.

One spectator stated that he believed that the film represents a wake-up call, in pointing to events in which their former fellow citizens were killed, events which represented a result of “collective delirium and obsession”. The film shows society, in an “honest, human, highly ethical and serious” manner, a topic which we have to deal with and accept responsibility for. According to the assessment of another spectator, the true quality of the film lies in the unbiased perception of events it offers, the acceptance of responsibility for these events, and the production of a very valuable document which will remain available for future research.