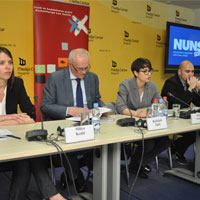 On April 5th, 2016, the Humanitarian Law Center (HLC) presented its report “Access to documents related to crimes against international law in the possession of Serbian institutions: State Secret Prevails over Right to Truth”. The Report offers an overview of the practice in the Republic of Serbia Ministry of the Interior (MUP) and the Ministry of Defence (MO) in the enforcement of the rule on access to information of public importance in relation to investigation into the crimes against international law committed during the wars in the former Yugoslavia.

The key finding of this Report, which was presented by the HLC Executive Director Sandra Orlović, is that the aforementioned institutions systematically prevent public access to the documents testifying about human rights violations and war crimes committed during the armed conflicts in Croatia, BiH and Kosovo. Such action is in contradiction to the international and national obligations of Serbia to allow victims and society access to those documents in possession of the authorities which are related to mass human rights violations. In this way, the institutions not only deny victims and the public the right to know the truth about the past, but they also make the prosecution of war crimes and the search for the missing even more difficult. Ms. Orlović reminded the public of the paradoxical fact that Serbia was one of the initiators of the United Nations Resolution on the right to truth in 2012, whilst at the same time its institutions are seriously ignoring the mandatory nature of the right to the truth, and are either mocking their legal obligations in this field or refusing to act in accordance with them.

During the research into the Rudnica mass grave, the HLC established that the Ministry of Defence has been in possession of information about this mass grave for 17 years, but has kept it secret from the families of the missing, thus participating in the crime committed over a long period of time.

The HLC Legal Director, Milica Kostić, presented the practice of state authorities in the concealment of documents on war crimes. Namely, as part of its research, the HLC has filed over 400 requests for access to information to the MUP and MO, most of which were dismissed on the basis of various arguments which are not in accordance with the law. The requests sent to the MUP were dismissed with such explanations as that the MUP does not possess the information requested or that it has several persons with the same first and the last name in its database. Ms. Kostić pointed out that this would mean that the MUP does not know who were the commanders of certain MUP units or which rank a certain commander held, or when the Special Police Units were discharged, and so on.

In an attempt to verify the validity of the MUP’s allegations on the non-possession of the information requested, the HLC sent seven requests to the MUP asking for documents produced by the MUP for which the HLC is certain that the MUP owns them, because these documents are in the ICTY judicial database. The MUP responded to all seven of these requests stating that it was unable to deliver the documents requested because it did not possess the information asked.

The MO dismisses requests for access to information of public importance using the argument of secrecy of information, but does not state on what bases it has declared a certain document a secret, stating only that the revelation thereof would violate the ability of the state to defend itself. Such a position of the MO points to the fact that the name of a brigade commander is considered a secret, as well as information on their movement during service and similar information.

During the research for the Rudnica Dossier, the HLC sent a number of requests to the MO asking for access to information of public importance. After the first requests started arriving at the MO, the then Minister of Defence, Bratislav Gašić, rendered a decision declaring the entire archive of the 37th Motorized Brigade of the Yugoslav Army a state secret, which represents the highest secrecy level. This decision of the Minister does not contain a reasoning, even though he was obliged according to the law to explain how it is possible that a 15-year-old archive about a brigade and an army which do not exist anymore, could harm the interests of the Republic of Serbia in such a serious manner.

The Commissioner for Access to Information of Public Importance and Protection of Personal Data, Rodoljub Šabić , agreed that the public has to have access to documents produced by state authorities relating to human rights violations and war crimes committed in the past. However, he denied the allegations of the HLC, that the Office of the Commissioner does not use its legal powers, stressing that the capacity of the Commissioner cannot go beyond the answer of the institution that it does not possess the document requested. He also pointed to other state authorities, which are monitoring the enforcement of the Law on the Free Access to Information of Public Importance, such as the Ministry of State Administration. He also recommended that the HLC should file criminal complaints against state authorities for commission of the criminal act of forgery, if it doubts the validity of their allegations that they do not possess certain documents.

A researcher from the Belgrade Centre for Security Policy, Saša Đorđević, spoke about the reach of the police reform which, among other things, prescribes transparency and public access to the work of the police and the verification of the suitability of candidates for the position of police officer. The basic problem in this regard is the fact that the legal regulations, which are mainly good, are not being enforced. Mr. Đorđević believes that one could hardly expect that the MUP would publish documents referring to serious human rights violations committed during the 1990s, if one knows that they prevent public access even to some basic information, such as the information on the chiefs of certain departments in the Ministry, or the overview of the results of the MUP’s work. On the other hand, the fact that 10% of the persons indicted of war crimes were active duty military officers or police officers at the time of their arrests, speaks volumes about the fact that an efficient reform of the security sector has not been implemented in Serbia.

Exhibition 360°: Once upon a time and never again

For the first time in Belgrade: “Besieged Sarajevo”

Conference for Presentation of Report “Access to Documents on Crimes against International Law in the Possession of Serbian Institutions: State Secret Stronger than Right to Truth”

Posted On 28th März 2016 ~ Comments Off on Conference for Presentation of Report “Access to Documents on Crimes against International Law in the Possession of Serbian Institutions: State Secret Stronger than Right to Truth”
U utorak, 5. aprila 2016. godine, sa početkom u 12h u Medija centru u Beogradu (II sprat), Fond za humanitarno pravo (FHP) predstaviće izveštaj „Pristup