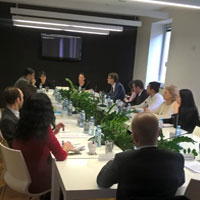 The third in a row of meetings on the importance of including transitional justice in the Republic of Serbia’s European integration process was held on February 24th, 2016, in the Humanitarian Law Center’s (HLC) Library. Representatives from the embassies of Switzerland, Netherlands, Belgium, Great Britain, Bulgaria, Cyprus, Slovakia, United States of America, Croatia, Norway, Bosnia and Herzegovina, and from the OSCE Mission to Serbia, along with a liaison officer from Kosovo participated in the meeting.

The HLC Executive Director, Sandra Orlović, presented the situation in Serbia regarding the clarification of the fate of the missing, along with connected processes, such as the prosecution of war crimes, opening of army and police archives, and institutional reform. The findings of the relevant international bodies – the United Nations Committee on Enforced Disappearances, the Council of Europe, the European Commission and the European Parliament – as well as problems relating to the opening of the archives, were presented by the HLC Legal Director, Milica Kostić.

A number of relevant international bodies have continuously pointed to the need for Serbia to invest additional efforts in order to identify the remaining mass grave sites on its territory, to prosecute the individuals responsible for concealing the bodies of victims and to protect the rights of victims’ family members. The archives of the Serbian army and police, containing information on the locations with bodies of victims, are not accessible to the public and, very often, not even to judicial bodies. There are still individuals working in the institutions of Serbia who were part of the structures responsible for the commission of crimes and concealment of bodies, and they are holding positions which allow them to obstruct the identification of the remaining mass graves.

According to the information of the International Committee of the Red Cross, 34,891 persons disappeared during the armed conflicts in the former Yugoslavia. More than 16 years since the end of the last conflict, families are still searching for more than 10,000 of their missing family members. Four mass graves sites have been found in Serbia to date, containing the mortal remains of more than 900 victims – mainly Kosovo Albanians.