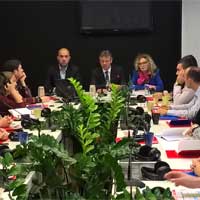 On October 16th the Fourth Regional School of Transitional Justice (the School) opened in the Library of the Humanitarian Law Center (HLC). Those attending the School were welcomed by Mr. Jean-Daniel Ruch, the Swiss Ambassador to Serbia, Almin Škrijelj, Director of the Pravnik (Lawyer) Association of Bosnia and Herzegovina, and Marijana Toma, Deputy Executive Director of the HLC.

Ambassador Ruch pointed out the very important role education has in dealing with the past – the kind of education which teaches about events in accordance with court-established facts. Post-conflict narratives in the countries of the former Yugoslavia are rich in nationalistic rhetoric, which creates space for potential conflicts in the future. Therefore, both official education programmes and programmes like the Regional School of Transitional Justice are important, since they help to raise the regional memory as a dam against any potential abuses by aggressive nationalistic rhetoric.

Talking about the achievements of establishing justice with respect to the gravity of the crimes committed during the armed conflicts in the former Yugoslavia, Ambassador Ruch says there have been some improvements, but there have been gaps, as well. The ICTY achieved what no domestic court could have at that moment, by processing those most responsible for the most serious crimes. These trials have also contributed to the establishment of irrefutable facts on war crimes, which are hard to deny or ignore today. On the other hand, justice has failed for certain serious crimes, like those committed during Operation Storm or against non-Albanians in Kosovo. In addition to this, 20 years after the armed conflicts, state institutions still hide the truth about the war crimes committed, and their victims and perpetrators. An example of this is the unknown fate of several thousand people in the region, although the archives of certain institutions contain data on the crimes in which they were killed and the secret locations where their bodies are concealed. Ambassador Ruch concludes that impunity for the crimes committed and concealment of the truth both complicate the regional reconciliation process and establishment of trust; adding however, that the education of the youth can contribute to overcoming certain negative aspects and creating the basis for a future life in common.

Almin Škrijelj welcomed the participants and praised their efforts to gain more knowledge on the common violent past, in the expectation that this knowledge would help them build a stable and peaceful future. He alerted the participants by pointing out that two decades after the conflicts, relations between the countries in the region still do not serve the function of creating good neighbourly relations. The existing restrictions should be unconditionally removed, since mutual encounters and exchanges are the seedlings of future good relations in the region.

Marijana Toma emphasized that the aim of the HLC education programme is to encourage the younger generations to educate themselves on the facts they could not be taught about in formal education programmes. This knowledge is especially important for young future decision-makers, who will be using it later to create a new society which will change its relations towards the recent past. According to her, the generation which was young during the war – a generation for whom the war and the killings were largely invisible – passes on an obligation to today’s younger generations, the obligation the first generation failed to assume; which is to insist on the facts about the events from the past, to persistently demand that responsibility for the crimes be established, and to cherish the memory of and respect for all the innocent victims.

The Regional School of Transitional Justice is a programme of informal education on the instruments for dealing with the past. The School programme includes lessons on the facts established in court proceedings before the ICTY and before national war crimes trials, extra-judicial mechanisms for establishing the facts about the crimes from the past, the right of victims of human rights violations to reparations, the necessity of carrying out reform of civil and security structures, the role of the media, education and other factors in establishing truth and responsibility, as well as the establishment of reconciliation in post-conflict societies.

Focus Group: Trial of Ratko Mladić and Legacy of the Hague Tribunal for Former Yugoslavia