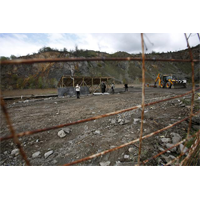 On June 12th, 2015, the Humanitarian Law Center filed a misdemeanour charge against the Minister of Defence, Bratislav Gašić, because of the unlawful labeling of the archive of the 37th Yugoslav Army Motorized Brigade (37th VJ MtBr) with the highest level of secrecy of data. The HLC maintains that the Minister of Defence has violated the Data Secrecy Law and that his actions are intended to make it impossible to clarify all of the circumstances relating to the killings of the Kosovo Albanians whose bodies were found in the Rudnica mass grave.

The HLC published the Dossier “Rudnica” in January 2015, in which it presents evidence of four crimes committed in April and May 1999 in Kosovo in the area of responsibility of the 37th VJ MtBr, which was at the time under the command of the present Chief of General Staff of the Serbian Army, Ljubiša Diković. The victims of these crimes were civilians – Kosovo Albanians — whose bodies were exhumed from the mass grave in Rudnica in 2014. The Dossier also contains a review of the process of the “clearing-up of the battlefields” in which bodies of victims were taken away from the scene of the crime and then concealed for 15 years.

The Minister of Defence failed to state in his decision a single reason justifying the designation of the documents of the 37th VJ MtBr a secret. The period of 30 years of secrecy has been prescribed for information carrying the label “top secret,” which represents the highest level of protection of data according to the Data Secrecy Law. Pursuant to this Law, this level of secrecy is assigned “for the purpose of preventing irreparable grave damage to the interests of the Republic of Serbia.” Minister Gašić, in his decision, in line with the Data Secrecy Law (Article 11 Paragraph 4) was obliged to explain in what way the interests of the state could have been irreparably and so severely damaged, which he failed to do. Apart from this, the decision does not explicitly state that the marking “top secret” was assigned in this decision, but this conclusion can be drawn on the basis of the period for which the disputable data has been designated a secret.

The unfoundedness of declaring the archive of the 37th VJ MtBr a secret is particularly evident if one bears in mind that this is information relating to events which happened some 15 years ago and an army which had a different structure than the Serbian Army and which does not exist any longer, and that a number of reports and other documents produced by the 37th VJ MtBr are already available to the public through the Judicial Database of the International Criminal Tribunal of the Former Yugoslavia (ICTY). Namely, there are dozens of combat reports of the 37th VJ MtBr, which are accessible through the ICTY Judicial Database, and former and present members of the Serbian Army have testified during the trials held before this Court regarding the activities of this Brigade, so this information is also available in the transcripts from the trials.

Finally, it is obvious that the decision of the Minister of Defence on the protection of the archival material of the 37th VJ MtBr dated July 31st, 2014 was rendered immediately after the HLC filed a request with the RS MD in June 2014 demanding access to the information relating to the 37th VJ MtBr, from which one could easily realize that the HLC had been investigating the circumstances of the killings and the transferring of bodies of Kosovo Albanians to the mass gravesite in Rudnica. The date on which the Minister rendered the secrecy decision, as well as the fact that he declared only the documents which relate to the 37th VJ MtBr secret, point to the fact that the intention of the Minister’s decision was to prevent the investigation of war crimes. — that is to say, he acted in violation of Article 3 of the Data Secrecy Law, which states that “data marked as classified with a view to concealing crime shall not be considered classified.”