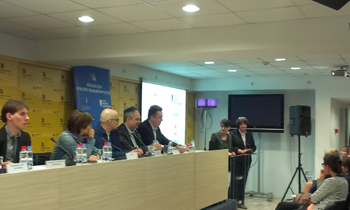 The Humanitarian Law Center (HLC) has received an award for its contribution to the fight against discrimination during 2014. The award is given by the Coalition for the Fight Against Discrimination as an acknowledgment of individuals, organizations, institutions, companies, and media, who have made the greatest efforts in the fight against discrimination against minority and marginalized groups during the year, or who have contributed to the development of the equality of all citizens in Serbia.

The consistent engagement in the field of the protection of rights of victims of war crimes and other violations of human rights, and the informing of the public in Serbia about the facts relating to the armed conflicts in the former Yugoslavia, have assured the HLC’s place among the recipients of this year’s award.

The other recipients of the award for the fight against discrimination in 2014, besides the HLC, were the Belgrade Police Administration Department for Public Peace and Order, Radio Television Vojvodina Morning Programme, Dossier Studio, and Ljubomir Živkov.