Committee on Enforced Disappearances: Serbia to prosecute individuals responsible for enforced disappearances and to protect rights of victims 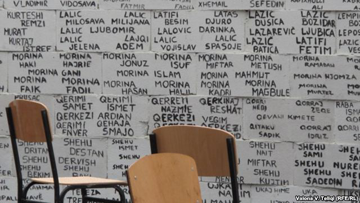 As  Amnesty International stated, the volume of recommendations addressed by the Committee to Serbia reveal the failure of Serbia to fulfil its obligations in accordance with the Convention, which was ratified in 2011: Serbia has failed to bring to justice all individuals responsible for enforced disappearances and has failed to protect the rights of victims of enforced disappearances and members of their families.

According to the findings of the Committee, Serbia should ensure that all cases of enfoced disappearance are completely and impartially investigated without delay, and that the responsible individuals, including the commanding officers and civilian leaders, be punished in line with the gravity of the crimes committed. The Committee particularly emphasized the need to bring to justice all individuals responsible for the transportation of bodies of Kosovo Albanians to secret locations in Serbia.

The Committee also emphasized the obligation of Serbia to protect the rights of family members of the disappeared, and reccommended the introduction of a comprehensive and gender-sensitive system of reparations, as well as access to medical and psychological rehabilitation for all individuals who have suffered damage as a direct consequence of enforced disappearance. The measures which Serbia needs to be taking include the protection of the rights of family members of the disappeared, which should be integrated into the Bill on the Rights of War Veterans, Disabled War Veterans, Civilian Invalids of War and their Family Members.

When discussing the problems which encumber progess in investigations, the Committee recommended that Serbia provide sufficient human, technical and financial resources to the Office of the War Crimes Prosecutor, and suspend from civilian or military service all individuals suspected of participating in the commission of  acts of enforced disappearance. The Committee called on Serbia to investigate all cases of intimidation and threats addressed against witnesses of war crimes and to strengthen the Witness Protection Unit, in order to be able to guarantee the highest standard of witness protection.

The alternative reports on the implementation of the International Convention for the Protection of All Persons from Enforced Disappearance were submitted to the Committee by the Humanitarian Law Center (HLC) and Amnesty International. In its Report, the HLC pointed to the inadequate legal framework relating to the legal position of the disappeared and their family members in Serbia, to the lack of adequate and efficient judicial protection of the right of family members of missing persons to compensation, and the absence of investigations into the cases of the concealment of bodies of Kosovo Albanians in mass graves in Serbia.

A propos the article “I hope Syria will not suffer western intervention – I have lived it”, published in The Guardian