Administrative Court in Novi Sad: Croat From Vojvodina injured by JNA members is not war victim 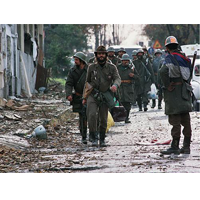 The Administrative Court in Novi Sad rendered a judgment on October 22nd, 2014, dismissing the lawsuit filed by the Humanitarian Law Center (HLC) against the Provincial Secretariat For Health, Social Policy and Demography (Provincial Secretariat), because they refused to grant the status of civilian invalid of war to A.S. from Vojvodina, whom JNA soldiers had attempted to kill at his job in September 1991 not far from Apatin. In view of this judgment by the Administrative Court, the HLC will file a constitutional appeal with the Constitutional Court of Serbia.

In the reasoning of its judgment, the Administrative Court and the Provincial Secretariat established that A.S. was wounded by JNA members in September 1991 at his work, while executing his professional obligations at a facility of importance to the state at the border with the Republic of Croatia. Nevertheless, the Administrative Court confirmed the position of the Provincial Secretariat that the injuries sustained by A.S. were not inflicted “at the time or the manner prescribed by the Law”, because it was JNA soldiers who inflicted the injuries on A.S., whereas the Law on Civilian Invalids of War prescribes that only persons who were injured by  “enemy forces” may be considered civilian invalid of war (Article 2 of the Law). The Administrative Court also held that the assault on A.S. occurred on the territory of Serbia, which was not at war and therefore the aforementioned Law could not be applied in this case.

On March 8th, 2012, the HLC, on behalf of A.S., initiated a procedure for obtaining the rights prescribed by the Law on Civilian Invalids of War. The Provincial Secretariat responsible for rendering the second instance decision sent the case to the municipal bodies following the appeals filed by the HLC for a repeated procedure, and it rendered a final decision on November 20th, 2012, dismissing the request filed by A.S.

The HLC filed a lawsuit in January 2013 with the Administrative Court in Novi Sad against the decision rendered by the Provincial Secretariat.

The HLC reminds the public that the Law on Civilian Invalids of War passed in 1996 represents the most discriminatory law of this kind in the region of the Former Yugoslavia. According to the HLC’s assessment, only 10% of the real victims of war crimes and other human rights violations who live in Serbia at present, have obtained the status of civilian victims of war or civilian invalid of war. According to the aforementioned law, the status of victim is not granted to victims who experience psychological consequences of the violence suffered, victims of human rights violations committed by the Serb army and police, families of the missing, victims of sexual abuse, and so forth. The UN Committee Against Torture and The Council of Europe Commissioner for Human Rights has addressed criticism to Serbia with regard to the treatment of victims, while the EC has noted in its latest Serbian Progress Report that Serbia has an inadequate legal framework for victim compensation.

A.S. is an ethnic Croat from Vojvodina. During the armed conflicts on the territory of the Republic of Croatia, he worked as security at a military facility in the vicinity of the Bogojevac Bridge. In late September 1991, unidentified members of the JNA entered the circle of the facility and called A.S. by his name to step outside from the facility. When he stepped out, one of the soldiers shot him from an automatic rifle and wounded him in the hip. When he fell to the ground, soldiers approached him and started kicking him, swearing at him and insulting him on the grounds of his ethnic background. After some time, they transported him in an army vehicle to a military hanger. There, they continued beating him and kicking him in the head with their boots, after which he fell unconscious. He woke up tied  to a military cot guarded by some other soldier(s), who soon took him to the hospital in Sombor. He spent 29 days in hospital, 12 of which in intensive care.

The Ministry of the Interior and the Secretariat for National Defence was informed of the assault on A.S. In one letter A.S. received from the Intermunicipal Secretariat of the Interior, it was written that the assault was committed by members of the JNA. However, a criminal investigation has not been conducted to date.

A.S. has suffered serious and permanent health consequences due to the injuries inflicted on him.