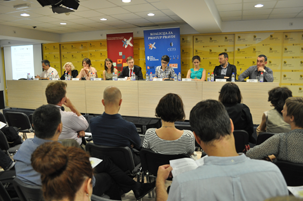 The Humanitarian Law Center (HLC) and the Coalition for Access to Justice today presented an analysis of the compliance of national legislation with the EU acquis in the area of war crimes and fundamental rights within Chapter 23 – Judiciary and fundamental rights. This analysis, „Transitional Justice in Serbia’s EU Accession Process”, shows the EU policies and instruments regarding the crimes committed in the past, the EU regulations containing principles of transitional justice, the current compliance of the Republic of Serbia’s legislation with these regulations, and recommendations for further harmonization. The analysis is available for download in Serbian and English

The aim of the conference was to highlight the need for dealing with issues in the field of human rights and the rights of victims of war crimes in the whole process of Serbia’s accession to the EU, issues which are of importance for the further democratization of Serbia. The accession negotiations are an opportunity for Serbia to make a civilizational step forward in relation to past events and the country’s relationship to those events, and to the victims of war crimes. The key issues in this process are making the institutions more sensitive, improvement of the legal framework, and existence of necessary mechanisms and the interest of the EU to support these initiatives. In her opening speech, the Executive Director of the HLC, Sandra Orlović, also stressed that political statements and declarations of reconciliation are important but not sufficient, as they have to be followed by concrete action.

Oskar Benedikt, the Deputy Head of the EU Delegation in Serbia, reminded everyone that the EU itself is based on respect for human rights and the rule of law, and that dealing with the past as a component of fundamental rights is an integral part of the accession negotiations. It is especially important to apply the existing legal framework to prosecute those responsible for war crimes, which in turn is crucial for eliminating the impression of impunity which has been created over the years and now disrupts the establishment of the rule of law and the process of dealing with the past.

Shanley Pinchotti, from the United States Agency for International Development (USAID), noted that the accession negotiations are an ideal opportunity to incorporate the process of dealing with the past into the institutional and legal framework of Serbia. She also pointed out the importance of non-governmental organizations for the improvement of the legal framework and the implementation of existing solutions.

Gordana Igrić, from the Balkan Investigative Reporting Network (BIRN), felt that the media are largely responsible for the prevailing atmosphere of general silence and indifference to the war crimes. To this day, the media have not shown an interest in covering and reporting about events and issues related to this field. There is also the additional restrictive factor of political influence, that discourages the media to follow and report on these topics. Additionally, the institutions are completely silent about their future intentions for implementing ways of dealing with the past, so there is an impression that nothing ever happens in this field – although war crimes trials do take place, and non-governmental organizations are making an effort to place certain issues from this field on the agenda of the relevant institutions.

A direct insight into the difficulties that the victims of war crimes have faced for a long time now was given by Emir Fetahović, from The Sandžak Committee for Protection of Human Rights and Fundamental Freedoms. He stated the main problems to be the slow and inefficient judiciary, the legal uncertainty due to frequent legislation changes, inadequate or disabled access to justice for vulnerable categories of the population, and the absence of a law on free legal aid. The recommendations for the improvement of the situation in this field include quick and effective investigation of human rights abuses in Sandžak during the armed conflict in Bosnia and Herzegovina, the granting of the status of civilian victim of war to the victims of these crimes, just compensation to the victims, an honourable memorialization of victims of crimes in Sjeverin and Štrbac, institutional reform and comprehensive implementation of the Programme for the return of refugees and displaced Bosniaks from the Priboj municipality in the period 1991-1999.

Saša Gajin, from the Center for Advanced Legal Studies, as a member of an informal working group that has worked on the preparation of a draft law on civilian victims of war, pointed out that the existing Law on Civilian Victims of War is one of the most discriminatory laws in Serbia. He also talked about the set of media laws, which – although marked as urgent – have been in preparation for three years and still have not been introduced into the parliamentary procedure. This actually illustrates the difference between declared intentions as expressed by the institutions and their actual willingness to develop certain solutions. The initiative for the Amendment of the Law on free legal aid also deals with the previously mentioned issue, and within this process for a long time now there have been discussions about the introduction of long-term providers of free legal aid into the new legal framework – an idea which, after an initial commitment, was finally abandoned.

Maja Mićić, the Director of the Youth Initiative for Human Rights in Serbia, pointed out that these days everyone advocates judicial reforms which will create an efficient and impartial judiciary, but nevertheless trials in Serbia still take too long and cause distrust in the judicial system. Additionally, recent years have seen a tendency to limit the openness and transparency of court proceedings. Therefore Ms. Mićić recommended that in the process of accession negotiations the EU clearly and precisely state what is expected of Serbia, and that, on the other hand , the Serbian institutions be clear and precise in the representation and evaluation of their performance.

Finally, Dragan Đorđević, from the Network of the Committees for Human Rights in Serbia, stressed that all decisions made on the national level have repercussions on the local level, where frequently there are not sufficient capacities for the effective implementation of policies. At particular risk are the socially vulnerable categories, which include the minorities. For them, the system of legal protection is in some cases limited or completely inaccessible. Mr. Đorđević particularly pointed to the local protectors of the citizens, who do not have sufficient capacity to ensure the protection of citizens in relation to human rights violations committed by the institutions. He urged that the future Law on free legal aid be available to all, and especially to the vulnerable categories of the population.

In this discussion, Milan Janković, from the Office of the Ombudsman, announced that this office will in the forthcoming period put an effort into placing the issue of reparations for victims of human rights violations and war crimes high on the priority list of Serbian institutions. Gordana Đikanović, from the Association of Kidnapped and Murdered persons in Kosovo and Metohija, expressed the expectations of the victims and victims’ family members that the status of civilian victim of war be legally regulated. Both requirements entail a modification or adoption of a new Law on Civilian Victims of War, which will overcome all of the unjust and discriminatory solutions offered by the existing Law and provide fair treatment for victims and their families.