Romana Schweiger, Head of the Rule of Law and Human Rights Department at the OSCE Mission to Serbia, opened the debate. The stance of the OSCE is that war crimes trials represent an inevitable element in the process of reconciliation and cooperation in the region and are an indicator of a new government’s devotion to the rule of law. Romana Schweiger stated that, as time passes, the chances for bringing persons responsible for human rights violations to justice are becoming smaller, and so the OSCE office in Serbia expects that the Office of the War Crimes Prosecutor will increase the number of indictments this year. She emphasized that the OWCP should start examining the involvement of persons who held high ranking positions and dealing with the issue of command responsibility, and she added that it was necessary to improve the witness protection system as soon as possible. 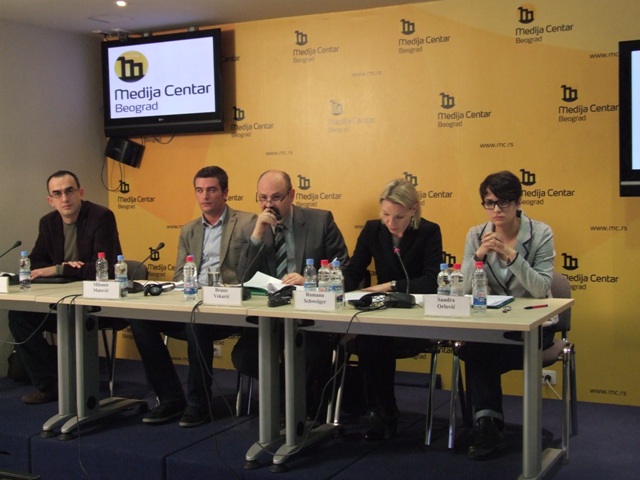 Sandra Orlović, Executive Director of the HLC, presented some of the general findings from the Report. Ms. Orlović stated that the HLC was not able to conduct an analysis of all the judgments on account of  the opinion of the Higher Court in Belgrade, according to which the delivery of judgements which have not yet become final would jeopardize the further course of the criminal proceedings. Because of this, the HLC has filed a complaint with the Commissioner for Information of Public Importance, who concluded that there were no grounds for such a decision. She stated, as one of her remarks in regard to the work of the OWCP, that during 2012 only seven persons were indicted, which is an extremely low number considering the fact that the prosecution of war crimes is essential for establishing transitional justice in a post-conflict society. She also stressed that the OWCP had continued with the practice of not filing indictments against persons who held high positions of command at the time of the conflicts.

Bruno Vekarić, Deputy War Crimes Prosecutor, stated that the Office of the Prosecutor is not satisfied with the HLC’s Report because it contains false information. As a response to the criticism that only a small number of indictments were filed during the year of 2012, Vekarić stated that this simply shows that a great number of preliminary investigations are pending, and that the number of indictments will be quite different in the next report. He emphasized that the OWCP is not “an indictment factory”, and he drew special attention to the cooperation between Prosecutors in the successor countries of the former Yugoslavia, which is contributing greatly to reconciliation in the region.

Protected witness Zoran Rašković spoke after the presentation delivered by Bruno Vekarić. Mr. Rašković stated that he was forbidden to talk about the Witness Protection Unit, but that he is fed up with being called a traitor because he has spoken up about the crimes and that he can no longer tolerate threats and attacks against him and his family. He asked for the trial sessions in which he delivered his testimony to be made public so that the general public could be informed about the events in Kosovo.

Milomir Matović, an HLC attorney, spoke about certain findings in the HLC’s annual Report on war crimes trials in Serbia. He stressed that the penal policy in war crimes trials is too lenient. He assessed that principles of fair trial were not respected in the trials conducted before the courts of general jurisdiction which the HLC monitored during 2012. As for the newly adopted Criminal Procedure Code and its application in cases of war crimes, Mr. Matović said that not all participants in these cases have conducted them well enough; and he added that judges have been the best prepared  for the application of the new CPC. At the end of his presentation, he stated that the witness protection system in Serbia did not improve in 2012, and that it suffers from a number of weaknesses which had been pointed out by local and international organizations and by protected witnesses.

Dinko Gruhonjić, a journalist and the President of the Independent Journalists’ Association of Vojvodina, spoke about the part of the Report which relates to the media coverage of war crimes trials. Mr. Gruhonjić highlighted that the media have provided selective reporting on trials, that there are different criteria for Serb victims and victims of other nationalities, and that journalists only relay the statements of state institutions without applying any critical analysis. Mr. Gruhonjić stated that, as one of the huge problems in the process of dealing with the past, no indictments have been filed so far against journalists for war propaganda.

The discussion was opened to the floor after these introductory presentations.

Miloš Milić, a journalist from the Radio Television of Serbia, disagreed with the HLC that the Anatomy of Crime show represents an example of irresponsible and sensationalist reporting because, as he believes, there is not a single journalist who would miss a chance to reveal something that the OWCP has provided newsworthy information about.

Marija Ristić, a BIRN journalist, was interested in knowing whether, after the Protocol on Cooperation between Prosecutions of Serbia and BiH is signed, the OWCP would have the right to dismiss indictments transferred from BiH, particularly the ones relating to Srebrenica and the Tenth Anti-Sabotage Detachment. Deputy War Crimes Prosecutor Bruno Vekarić stated that actual progress in these cases will be made possible only after the agreement on the transfer of evidence is signed.

Attorney Dragan Pjevač, a member of the Coalition for RECOM, reminded the participants that victims do not need promises that all responsible individuals will be prosecuted, but  rather, to see that those  who are brought to justice are prosecuted properly.

Lakić Đorović, a former marital courtProsecutor, emphasized that, contrary to the claim of prosecutor Vekarić, command responsibility was defined by local laws and the judgments rendered by the Hague Tribunal must not be an alibi for the failure to prosecute criminals.

Mioljub Vitorović, a Deputy War Crimes Prosecutor, believes that the part of the Report which refers to the analysis of the Gnjilane Group case contains allegations that are malicious and represent a personal insult. Vitorović believes that the accused, Agush Memish, addressed direct threats at him during the presentation of the closing arguments in the Gnjilane Group Case, which is contrary to the opinion of the HLC as presented in the Report, in which it is alleged that no one addressed threats at Prosecutor Vitorović. Prosecutor Vitorović also pointed to different press releases issued by the HLC anent the judgments rendered in the Gnjilane Group Case with regard to the granting of credibility to the statements given by the cooperative witness “Božur 50”. In response to the critique by Prosecutor Vitorović, Sandra Orlović pointed out that the Report does not contain a single qualification which could be characterized as a personal insult, and that the evaluations of the HLC regarding the existence of threats were based on the assessment made by the trial chamber in this case. Ms. Orlović also pointed out that, after the repeated trial, the trial chamber itself changed its opinion with regard to the statement given by cooperative witness “Božur 50”.

The debate was organized with the support of the Institute for Sustainable Communities and the US Agency for International Development.

Reports on war crimes trials in the Republic of Serbia 2010