Reactions to the Judgment in the Lovas Case

Mirko Kovačić, a member of the Vukovar Mothers Association and himself a member of a victim’s family, stated that the failure of key witnesses and the army leadership in particular, to appear before the court had had a great impact on the final judgment. “The Army is in some way protected and nobody dares touch it,” he said. However, Kovačić noted that at least some satisfaction had been achieved; he added that it was important to talk about crimes and that this crime had not been neglected by the law. “Maybe this trial will prompt some other trials, and by some other trials, I primarily mean the crimes committed at Velepromet in Vukovar, which is still considered a taboo.”

“I am not satisfied with the judgment. It has been proven that just 40 victims had crimes committed against them, leaving another 30 victims without justice. What I do not understand right now is what will happen in the case of the 30 victims against whom it has not been proven that a crime was committed”, Janja Marković Marić, one of the victims’ family members stated.

Marina Kljajić, the Humanitarian Law Center attorney and the legal representative of victims in the Lovas Case, stated that she believed that despite the maximum sentence imposed on the key accused, it was still inadmissible to impose on others a sentence below the legal minimum. “Sentences of five years of imprisonment for people who forced civilians into a minefield are humiliating.”   Kljajić also said that the behaviour of former officers of the Yugoslav Peoples Army (JNA) during the trial was scandalous and that the military prosecution service in Belgrade had tried to conceal data that could have helped clarify the case.

Nataša Kandić, the Director of the Humanitarian Law Center, stressed that this judgment  showed that justice is possible and that the victims had been taken care of. “In this case, for the first time, command responsibility and the consequent obligation towards victims, was accepted as an aggravating circumstance.” Kandić said she believed that the facts presented clearly showed the level of responsibility that the accused had with regard to the crimes committed. The judge condemned the behaviour of the JNA soldiers saying that they had lied in order to minimize their own responsibility. This was quite clear in the case of the accused Dimitrijević, who took advantage of those in his own unit in order to protect himself. “The judgment should match the gravity of the crime and the consequences”, Kandić stressed. “Nikolaidis was sentenced to six years of imprisonment, yet he was the only one who spoke openly about the crime and helped to clarify the events.” 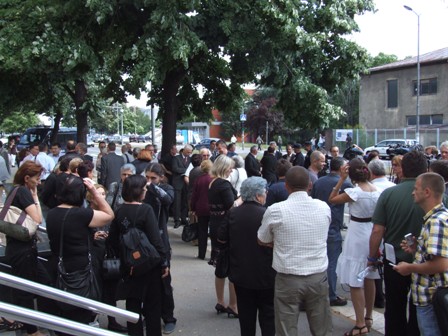 Today, the Higher Court in Belgrade Department for War Crimes delivered a judgment in the Lovas Case convicting 14 JNA soldiers, local territorial forces, and the Dušan Silni (Dušan the Mighty) paramilitary formation , sentencing them to the total of 128 years of imprisonment.