A group of American academicians visited the Humanitarian Law Center (HLC) on Friday, May 25th, 2012 as part of their political study visit, which is aimed at researching of how Serbia and Bosnia and Herzegovina have changed after the toppling of Milošević. The study group is lead by Nicholas Wood, a former New York Times reporter in the region, and it gathers journalists, publicists, businessmen, and former ambassadors. In her opening address, Nataša Kandić, the HLC Executive Director, spoke about the current political situation in the country and the need for the society to deal with the past as soon as possible.

Representatives of the HLC presented the Kosovo Memory Book and the RECOM Initiative, as well as Diković Dossier and 10th Sabotage Detachment Dossier, which were created on the basis of judicial facts established before ICTY. They also discussed the need for politicians and the entire society to accept the responsibility for past events and they also stated that it is important for the state to support the initiatives of human rights organizations, thus preventing recurrence of crimes.  The guests showed special interest in the bearing of the society towards the victims and the manners in which it would be possible to raise citizens’ awareness about the things that happened during the wars. 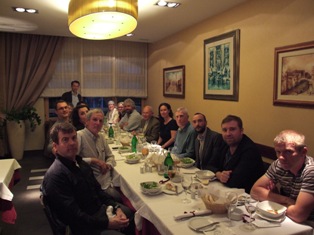