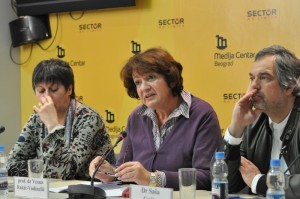 “New provisions of the Civil Procedure Law (CPL) and the Criminal Procedure Code (CPC), regress the legal regime of the Republic of Serbia into the authoritarian past, thus restricting citizens’ access to justice. By these provisions, the state becomes the most protected, and politicians and tycoons obtain a more privileged status compared to the citizens. These provisions also represent a threat for the media and the freedom of information”, Prof. Dr. Vesna Rakić-Vodinelić from the “Union” University Faculty of Law highlighted on January 23rd during the press conference regarding the initiative for assessing the constitutionality of the Civil Procedure Law held in the Belgrade “Media Centre”.

The Coalition for Access to Justice (Coalition) has announced to file an initiative for the assessment of the constitutionality of the recently enacted law, which shall be applied as of February 1st.

“New provisions of the CPL deprive us of the opportunity to be represented by human rights organizations before court. It is much more difficult for the parties to the procedure to realize their right of access to courts because they can only contact an attorney or legal aid services, which practically do not exist. This provision is in violation of the Constitution of Serbia since it diminishes the acquired level of human rights, let alone the European Convention for the Protection of Human Rights”, Rakić-Vodinelić added.

She emphasized that consequently the state, including the military and the police, becomes the most protected subject:

“Party to the proceedings against the state first has to file a motion for mediation, to which the state has the obligation to respond within 60 days. Only then can the party file a lawsuit. The prohibition of discrimination is thus violated because all persons should be considered equal before the court and the state, politicians or tycoons cannot be considered more equal than the others, this represents discrimination against those who file lawsuits against the state. These provisions are authoritarian”, Rakić-Vodinelić stressed.

“The solutions from the CPC disturb the legal regime in Serbia. We no longer have the right to choose our representative before the court; this represents an attempt to establish the monopoly of attorneys in the legal assistance arena. The freedom to dispute public matters, which represents a postulate of democracy, has thus been violated”, Dr. Saša Gajin from the Centre for Advanced Legal Studies underlined.

Gajin added that these provisions offer an opportunity for those holding political and public positions of public retribution directed against the ones who criticize them:

“If you allege that an official has violated human rights, on the basis of the CPL you may be subject to threats of public reprisal, a lawsuit, which may result in a damage claim, and the request to remain silent in the future! The Public Information Law, on the other hand, says that public debate is free, hence we have a dual legal regime, so the one who sues you can choose, and of course, he/she will choose to sue you pursuant to the CPL”.

Ombudsman Saša Janković underlined that new provisions suffocate the democratic freedom of expression and it is necessary to put more pressure of the authorities:

“This is not an accidental sequence of events, but rather a clear intention to, for example, banish the commentaries of trials. These are the topics which are essential for the democracy in Serbia.”

“The Executive branch of the government ate all other government branches, especially the Judiciary, by banishing commentaries to the court decisions. Politicians are the ones who should be prevented from commenting court decisions and not the citizens”, Dragana Boljević, President of the Association of Judges of Serbia, said.

The Coalition for Access to Justice is comprised of the Centre for Advanced Legal Studies, Civil Rights Defenders, CHRIS – Network of Committees for Human Rights in Serbia, Humanitarian Law Center, Youth Initiative for Human Rights, Independent Journalists’ Association of Vojvodina, Sandžak Committee for the Protection of Human Rights and Freedoms and Praxis.

Besides the support of the Ombudsman Saša Janković, the initiative for the assessment of the constitutionality has also been supported by the Commissioner for Information of Public Importance, Rodoljub Šabić.

EVENT ANNOUNCEMENT: Press conference for presenting the report “Victims’ Right to Reparation in Serbia and the European Court of Human Rights Standards”