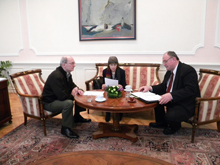 With regard to our wars and war crimes, the ones who apologize the most are the leaders of newly established states. As a rule, they apologize to the people, their own or the other people, during visits or some other important political events. These apologies are short-term and, therefore, they are remembered for a short time. This may be because there has not yet been a single politician who earned the trust of victims from the “enemy side” by his apology or praise from “his own people”. Nevertheless, some words, even though they do not express compassion or apology, remain in the memory. Words said by the President of Croatia, Josipović, on the occasion of marking the 20th anniversary of the international recognition of the Republic of Croatia, had a significant impact on me; he said that Croatia is a better country today and it is due to the better relations between Serbs and Croats. This is the essence of the peace building, reconciliation, justice, and prevention of recurrence of crimes – this is how I see transition from repression and injustice towards the respect for human rights and victims. In the case of Serbia, without acknowledging Albanians, Bosniaks, and Croats, and their better treatment by Serbs – the ones sitting in the government and us “ordinary” people – there can be no better Serbia. This positive approach could help us in defining a “new opinion” about Kosovo.

Besides apologies on the relation leaders – people, we often hear apologies among ordinary people, intellectuals, and in civil society gatherings, because of the inability to stop the war, to show solidarity, to publicly protest, but we also hear critical reconsideration of our own attitude and responsibility.  I have not yet heard a government apologize to human rights activists because of the insults and humiliation they were exposed to during the previous regime or because of the assaults of today’s false patriots and extremist political groups. I had the honour of being called by President Tadić three or four years ago, when I received threats that I would be executed, I do not remember on what occasion, who asked me if I was alright.

In the context of apologies I cannot go on without mentioning two events related to me personally. The first event happened in 2007 when Simo Spasić, who was the leaders of the Association of Family Members of the Kidnapped, Killed and Missing in Kosovo before he went to prison, along with several other members of this Association, and after a number of criminal complaints, a mass protest in front of the HLC premises because of the violence against Serbs in Kosovo on March 17th, 2004, a break in the HLC’s Library and the breaking of a framed map of Kosovo, came to me to apologize. On this occasion, Simo Spasić said that the government had been using them and inciting them against human rights organizations, particularly against the Humanitarian Law Center. It was the beginning of a new relationship between human rights organizations and associations of victims. The second event is related to the government of the Radicals in Kikinda, who pronounced me persona non grata on June 24th, 2005. On this day, the Municipal Mayor, Branislav Blažić, together with some one hundred members of the Serbian Radical Party organized a protest in front of the VK Television building, at the time when I was supposed to arrive at this TV station. Unlike the war time image of the Radicals, on this occasion they wore masks. In the middle of the interview they cut off the power in the studio. Six and a half years later I received an invitation from the Municipality of Kikinda, to come and meet the Municipal Mayor, Ilija Vojinović, because of some ugly things from the past. On January 18th, 2012, at 11:00 I was seated against a decent politician, who simply and easy said to me: “I am sorry about the insults, it was the abuse of the municipal assembly and the town of Kikinda.” This apology scared me. I did not know what to say, whether I was supposed to say “thank you” or “you shouldn’t have”. I rushed to tell the story about the “Kosovo Memory Book”, RECOM, and the forthcoming gathering in Kikinda on the occasion of the Memorial Day for the Victims of the Holocaust. It was a beautiful day.