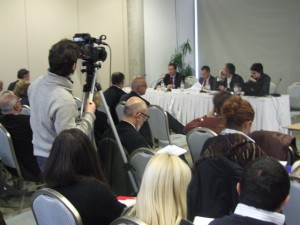 According to the organizer of the event, Sandra Orlović, the Deputy Executive Director of the Humanitarian Law Center (HLC), the conference was aimed at discussing possible models for realising the right to reparations in Serbia and triggering a dialogue on this issue with respective state institutions.

“Victims of wars must be granted the right to have their dignity restored through material, but also symbolical reparations”, the Director of HLC, Nataša Kandić, stated saying that the state has the obligation to create conditions for “just” compensation. She assessed that there can be no rule of law if special attention is not paid to victims, those who suffered injustices and unless compensation programs for victims are created.

During the first panel discussion, reparations models which exist in other post-conflict states were discussed, but also the manner in which this issue has been resolved in the countries in the region.  Viktorija Ružičić Tokić, a representative of the International Commission on Missing Persons from Sarajevo, presented the model, which exists in Bosnia and Herzegovina. Even though the law in BiH  supports victims and their families greatly (for instance with the provision relating to the right to dispose of missing persons’ property by their close relatives without them having to declare them dead),  problems arise at the level of political will and the lack of finances for the implementation of this compensation program.

When it comes to administrative reparations in Serbia, there has been a lot of talk about the unequal position of civilian and military victim of war. According to the current legal regulations, civilian victims of war are being discriminated against and it is much harder for them to realize their right to reparation. Another topic of the discussion was the amendment of the regulations establishing the level of damages, which allows for the right to compensation. Professor Duško Čelić from the University of Priština, introduced the guest to the problems and the lack of understanding expressed by the representatives of ministries when it comes to reparations and problems of the missing, but he also highlighted that solidarity is the one value, which is necessary in every democratic society.

Saša Gajin, from the Centre for Advanced Legal Studies, sublimed the demands and suggestions, which could have been heard during this conference. It was noted that the number of victims of human rights violations is much greater that the number of persons who enjoy the right to reparation. It is necessary to adopt an adequate normative model and include all key actors into the creation of this model. Regional approach to the solution of this problem would also be very useful, Gajin concluded.

Vojkan Simić, Assistant to the Minister of Justice,  said that even 20 years after the armed conflicts have come to an end, relations in the region are still, 20 years after the armed conflicts, conflicting and there is no obvious political will to grant the right to reparation for victims. But some crimes are being minimised and some exaggerated instead.

“The reconciliation process has to be effective and it has to consist of punishments for perpetrators of war crimes and compensations for the victims, both material and symbolic”, Simić said. He added that the idea of the Ministry of Justice of Serbia is to build a regional framework for compensations.

Goran Miletić from Civil Rights Defenders, the organization, which sponsored the conference, evaluated that reparations for victims are the essence of the respect for human rights and that it is not only about the obligation towards victims, but compensations are also an obligation for the society.

ANNOUNCEMENT: Presentation of the report “The legal and institutional framework in Serbia regarding the rights and needs of civilian victims of war”

Posted On 16th August 2017 ~ Comments Off on ANNOUNCEMENT: Presentation of the report “The legal and institutional framework in Serbia regarding the rights and needs of civilian victims of war”
U utorak 22. avgusta 2017. godine Fond za humanitarno pravo (FHP) predstaviće izveštaj „Pravni i institucionalni okvir u Srbiji u pogledu prava i potreba civilnih