MOST Radio Free Europe: Consequences of the Ganić case on relations in the region 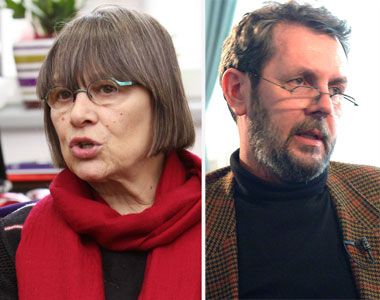 Omer Karabeg: Our interlocutors are Natasa Kandic, director of the Humanitarian Law Center from Belgrade, and Zdravko Grebo, a professor at the Faculty of Law in Sarajevo. Serbia has the intention to try what it considers war crimes against Serbs in Bosnia and Herzegovina. This was first demonstrated by the trial in Belgrade of Elijah Jurisic, a citizen of Bosnia and Herzegovina, in the Tuzla Column case, and now by the request submitted to the UK to extradite Ejup Ganic whom the Prosecution of Serbia alleges was responsible for killing soldiers of the Yugoslav People’s Army at the beginning of the war in Sarajevo. How do you see this move of the judiciary in Serbia?

Natasa Kandic: It is obvious that there is political motivation in the Prosecutor of Serbia trying to present itself as responsible for all crimes committed in the armed conflicts in the former Yugoslavia. And that’s not good. It shows no willingness to cooperate with prosecutors in other countries, because it would be normal for the Serbian prosecution to share evidence about the events in Dobrovoljacka Street, if any, with the Prosecutor’s Office of Bosnia and Herzegovina, and then push for that process to be opened. The attempt of the Serbian prosecutor’s office to present itself as having jurisdiction for everything that happened in the war is reminiscent of the Milosevic approach, in the same way that  Milosevic claimed that he was defending the idea of preserving Yugoslavia. With this indictment, Serbia is doing something similar, except that now the situation is different. But I will not deny that what happened in Doborovoljacka Street was a crime and the Prosecution of Bosnia and Herzegovina should finally clarify and establish responsibility for the accident.

Zdravko Grebo: It seems to me that the Ganić case introduces some new elements in old wounds. Although it is the Elijah Jurisic case that is much more important because after the verdict he received it will be difficult to get out of jail and paying the price for something which he is definitely not responsible. My interest in all this, however, is that this whole thing with the retention and arrest Ejup Ganic has an absolute political background. No one can ever dispute that the crimes occurred, that all crimes must answered for, and that people who are on any basis – command responsibility and direct involvement – involved in all this part should be punished. However, the arrest of Ejup Ganic has triggered a whole series of discussions that will result in quite a fundamental shake-up of relationship between the states in the region. I am not interested so much of his individual destiny as the fact that the whole event took place almost in a cosmic collision – the same day, when Ejup Ganic was arrested, the trial of Radovan Karadzic, Batko was mysteriously found in Spain, and Miodrag Zivkovic, chairman of the Parliamentary Assembly of BiH locked the assembly hall so as not to celebrate BiH Independence Day. So there were a lot of coincidences that would not have a political background. What is also interesting is that the judicial authorities of Serbia that raised the indictment refer to crimes committed against members of the Army. I do not understand, though not denying that a crime was committed and for a long time should have been processed, why Serbia has the jurisdiction to prosecute crimes against members of the JNA. Were the people who were killed in the Dobrovoljacka street and in the Tuzla Column case only Serbs and what were members of the JNA doing in Tuzla and Sarajevo anyway at that time? Most of these people, who are innocent victims, were members of an army which at that point had no authority to conduct any tasks there. And finally, what is the responsibility of the JNA top brass, Kadijevic, Adzic and others, who were at the head of the army when they first ignited conflicts in Slovenia, then Croatia and Bosnia and Herzegovina.

Natasa Kandic: Really by raising charges against alleged perpetrators, those responsible or allegedly responsible for the killing of JNA soldiers, Serbia shows what it has been hiding all these years. She denies that she was party to the war, that she participated in the war and having anything to do with that the armed forces that fought in that war. By raising these charges Serbia actually recognizes this.

Omer Karabeg: There arises a question of principle. Can domestic courts objectively try citizens of other countries for war crimes because the criteria are completely different – what is for one a war crime, is for another an act of heroism?

Zdravko Grebo: Gotovina, Bobetko, Praljak, Naser Oric, Delic, and then a whole different set of Presidents and Generals of Republika Srpska, Serbia and Yugoslavia, are in general perception and in national feeling, I’m afraid, remembered as heroes. Therefore, there is no exit from this until someone with some moral credibility says, “Yes, we in that conflict,” talking about Bosnia and Herzegovina, “were the biggest victims, but also that war crimes were committed in that defensive war”. It is not even on the horizon.

Omer Karabeg: We understand that the Hague prosecution was once considering, among other cases, and Tuzla Column case and the Dobrovoljacka street case and did not find it necessary to take action. To what extent does the opinion of the Hague Tribunal influence the prosecution of these two cases?

Natasa Kandic: I have no information that the Hague Prosecution was involved in this. I know that some documents relating to the Tuzla column were transferred to the Prosecutor’s Office, but the Hague prosecution is not communicate any advice or recommendation regarding the Tuzla Column case, even when the trial began in Belgrade. As for the Ganic case, or where he would be handed over, I count on the British judge, who will bring a decision on the request of Serbia, to keep in mind how the relations are between states and what can be expected if Ganić is handed over to Serbia. I think that they will deliver Ganic to the country of which he is a citizen. But it should then be taken into account that the Prosecution really prioritize the Dobrovoljacka street case and the shooting in the Great Park.

Omer Karabeg: How will the fact that the Hague tribunal has left many war crimes cases to be tried by national judicial authorities affect relations in the region?

Zdravko Grebo: I’m afraid that this will lead to further complexity of relations in the region. Why do I think this? Because in Croatia or in Serbia or in Bosnia and Herzegovina, you will always have the same problem that the Serbs, Croats and Bosniaks look at war crimes differently and, of course, the perpetrators from one’s own ethnic group are considered heroes, or even as people who did what they did out of extreme necessity, and in the end it turned out that it is a crime.

Natasa Kandic: What Serbia is trying to do in the Ganic case is play up to Serbian victims by instrumentalizing killed members of the JNA. However, as I already said, by doing so Serbia openly admits what we have all known and what Serbia has never officially admitted to until now and that is that the JNA in 1992 was in fact the Serbian army which was in the service of one policy irrespective of what later happened in May the whole army allegedly withdrew from Bosnia and Herzegovina. But we all know that that army retrained and remained in Bosnia and Herzegovina. Although all these facts are unfortunately difficult to prove, they do not even need to be the subject of discussion because they all known and we all accept them as facts.

Omer Karabeg: Do you expect to be able to reach agreement in the region on whether to prosecute war crimes, to establish some rules so that more such cases are not repeated causing trauma, frightening people, deteriorating relationships, taking us back to the 1990s?

Zdravko Grebo: To my great regret, I do not expect that. I think that with the existing political elites such an agreement is not possible in the near future. Or, if reached, it will be false and no one will appreciate it. In the Ganic case, which has already become an operetta, it is apparent that such a principle cannot be realized. The Minister of Foreign Affairs makes a note of protest, and his deputy says it is “from the Serbian people” – I loathe it when I have to speak in those terms – when it was his private opinion. Zeljko Komsic, the recent Chairman of the Presidency very weakly protested against all this, above all to upset Nebojsa Radmanovic, a member of the Presidency. Therefore as long as Bosnia and Herzegovina is divided on the principle of ethnic exclusivity, where we are all only Serbs, Croats and Bosniaks, that principle cannot function.

Omer Karabeg: How will the Ganić case affect the freedom of movement in the region?

Zdravko Grebo: I think I was the first man from Sarajevo after the war to go to Belgrade, where today’s co-speaker saved me from a crazed former soldier who tried to attack me in front of hotel “Moskva”. Well, of course it will affect the safety of movement. People will not be able to travel, not only out of fear they could be arrested, but also because they don’t want to become the victim of someone who will try to redeem some outstanding debt from the war. To joke a little, but in this region nothing is impossible, it might happen that the next time Boris Tadic comes to Sarajevo he will be arrested because he was defence minister when Mladic was still on the payroll. Therefore, let us all arrest each other for the rest of our lives.

Natasa Kandic: It will affect freedom of movement, above all BiH citizens, especially when in terms of their arrival in Serbia. It will arouse fear. And that is dangerous, which retards all relations and irritates victims horribly.

Omer Karabeg: Do you expect, as Mr. Grebo says, that we will now move towards reciprocal measures. As I have heard the Bosnia and Herzegovina prosecution is preparing an indictment against certain Milosevic officials in connection with the siege of Sarajevo?

Natasa Kandic: I’d like the Ganić case to start with much needed constructive communication between prosecutors in the region. As far as Serbia and Croatia are concerned, that cooperation exists; they are even thinking about signing a bilateral agreement that would solve the problem of the constitutional ban on extradition. And where the United Kingdom is concerned, there is the problem of Serbia’s prosecution strategy to try nationals of other countries if the victims are identified as Serbs. It is a bad strategy that can lead only to a deterioration in relations between prosecutors. I therefore think that the Ganić case should compel the judiciary of Serbia and Bosnia and Herzegovina to define what is most constructive when it comes to prosecuting war crimes in the region, and that is that each country tries its own citizens.