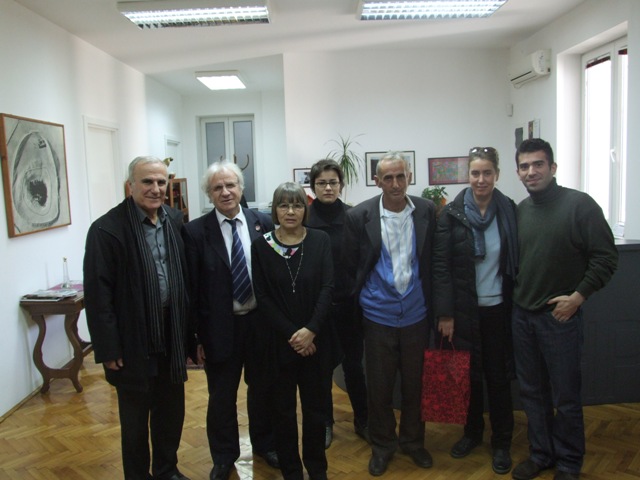 BELGRADE, November 28th, 2011 – Jahir Krasniqi and Jakup Tahiri, victims of unlawful detention in 1999, gave statements on Monday, November 28th, 2011 before the First Basic Court in Belgrade in a compensation lawsuit that HLC initiated against the Republic of Serbia because of its responsibility for torture and unlawful detention. Jahir Krasniqi and Jakup Tahiri testified about the torture and unlawful detention they were subjected to in Serbian prisons in the period from 1999 to 2000 and medical consequences that they still suffer due to this torture.

Jahir Krasniqi was taken by force from the village of Trdevac/Trdëc in May 1999 by Serb paramilitary formations to the village of Banjica/Bajicë and he was beat during the entire journey. When they arrived in the village of Banjica/Bajice, there were a lot of people in a meadow. Army guarded them. The child Jahir Krasniqi was carrying with him was taken away from him and thrown on the ground. The child broke his shoulder on this occasion.  Jahir was separated from the group and taken to a water canal where he was subjected to beating together with 24 other people and they were then taken to Glogovac/Gllogoc, to some sort of a hall. A lot of people were there and they were kept there until the following morning with no food or water, and then they were taken to the railway station where people in civilian clothes beat them with batons. Later on, they learned that these men were inspectors. Krasniqi was beat with a baton until he fell on the ground, and one of the men even tried to kill him. He charged his weapon three times to shoot him, but it failed to fire, then one police officer came to him and said, “Don’t do this. You see that he is lucky.” Then he was taken out, and forced to undress himself but to his underwear on. Then he was beat by a stick on his left shoulder, back, and body until he fell down and was not able to get up again. They forced him to eat grass while he was on the ground. Then he was taken, along with 4 other persons, to Priština/Prishtinë. They stopped near Kosovo Polje/Fushë Kosovë. One of the prisoners understood Serbian and heard them say “don’t kill them here, take them to the prison”. They were taken to the prison in Priština/Prishtinë where they were beat and tortured again; they hit them with whatever they found handy; and then they were transported in a van to the prison in Lipljan/Lipjan. He spent a month there. He spent the first 3 days in the pavilion and then he was in a hall together with 350 other detainees. On June 9th, 1999 they were split into groups of 50, handcuffed and taken by bus to the prison in Sremska Mitrovica. They received a piece of bread and small portions of poorly cooked  meals; they slept on the floor; they only had one blanket each, and he was wearing the same clothes the entire time. He spent 3 months in Sremska Mitrovica. During the entire period of detention, he did not receive a single paper nor was he told about the reasons for detention. He was also subjected to beating there and once he ended up in the medical care office. After a month and a half he was separated, together with 10 other persons, and taken to a solitary where he spent 10 days, He was released on October 4th, 1999. He was examined by the Red Cross doctors, who told him that he suffered psychological and physical trauma; that he was not capable of working and even today, if he travels somewhere, he has to be escorted by a family member. He still takes sedatives, he goes to regular examinations with the psychiatrist and a regular doctor because of his leg since his knee was damaged by a hit with a stick. A doctor in Priština/Prishtinë and a doctor in Glogovac/Gllogoc diagnosed him with PTSD. While in prison, he did not receive a decision that any procedure was initiated against him.

Jakub Tahiri lived in Glogovac/Gllogoc, and he was taken away from there with other men on April 26th, 1999 to the police station where he was beat and tortured, and then released. On April 28th of the same year Army of the FRY and Serbian police, together, gathered about 150 men, including Jakup and his son. One police officer known by the nickname of “Lutka” (Doll) took his personal identity card and said, “we have a man from Likovac/Likoc“, after which they cussed at him and beat him so that he fainted; he had 4 ribs fractured; while he was unconscious he was taken to some place where he spend the entire night and the following day and where he was beat again. Some inspectors interrogated him and asked him what he knew about KLA since their headquarters was in Likovac/Likoc; he was interrogated and beat three times. The following day he was taken to the prison in Lipljan/Lipjan, where they were stripped to their underwear and beat for about two hours. In rooms they had to sleep on the concrete without any food or drinks, and they were allowed to use the toilet only once a day. On April 9th, 1999 he was taken to the prison in Požarevac.  Guards in Požarevac prison waited for them with sticks in their hands, beat them and took them through the halls, and they had to sleep on hardwood floor. He was in the prison until April 18th, 2000 without an indictment or any decision ordering a procedure against him. The only thing they were told was that they were terrorists. He sought medical attention in Lipljan/Lipjan because he had fractured ribs, but he did not get it. He was released through the assistance of the Red Cross. When he returned home, he was emotionally so moved that he could not leave his house for a year. Doctors that he knew would come to his house and prescribe him sedatives, which he still needs to take.

Court of Appeals in Belgrade: Responsibility of the state for the murder of Croats from Vojvodina not affected by the statute of limitations

Posted On 14th April 2015 ~ Comments Off on Court of Appeals in Belgrade: Responsibility of the state for the murder of Croats from Vojvodina not affected by the statute of limitations
Apelacioni sud u Beogradu je doneo rešenje kojim je usvojio žalbu Stjepana Oskomića protiv presude Osnovnog suda u Beogradu, u predmetu koji je pokrenuo protiv